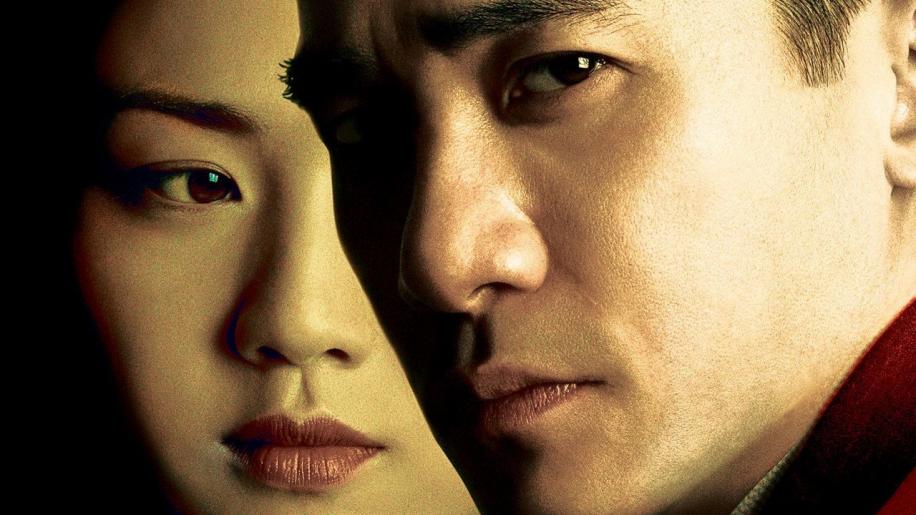 Ang Lee remains something of an oddity to many. Lauded in circles that are akin to the movie world's intelligentsia for his forthright depiction of troubled relationships and broken ideals, yet also able to turn a profit and have the capability to make a well thought out kung fu epic. To top it all off, he had the audacity to tackle a comic book adaptation with 2003s Hulk. It can be hard to tell which genre or style he will turn his hand to next, but one thing remains a constant, the man's focus on personal conflict and his ability to direct such subject matter adeptly. Whether it is about the fractured suburbia of The Ice Storm or the hidden amore of Brokeback Mountain, the emphasis has often fallen on that which remains secret. For his latest offering, he has turned once again to the East to film a story of taboo. Based on the short story by author Eileen Chang, Lust, Caution caused ripples upon its release and often for the wrong reasons. For each perceptive article written about its portrayal of morality and culpability, there were unfortunately what seemed like a dozen more intent on placing the spotlight elsewhere, namely on the explicit sex scenes contained within the film. This not only created a reputation unbefitting of the piece but also shifted the discourse to one which has little importance in relation to the narrative as a whole.

The film tells the story of a group of students in Japanese occupied China. Some are idealistic and others profoundly sheltered, but all come to the same conclusion, that they should find a way to make a difference to their country's plight. This starts out as nothing more than a patriotic play, but soon leads the unknowing troupe down a rabbit's hole which brings with it unwelcome surprises. They soon decide their acting acumen to be a tool which is useful and can be used to find a way to infiltrate the inner circle of a Chinese official who is collaborating with the invading forces. From there they plan to eliminate him for the good of their country. The group consists of six youngsters but at the hub of them are Kuang Yu Min (played by Asian-American singing sensation Lee-Hom Wang) and Wong Chia Chi. The former has lost his brother and is adamant that people should take responsibility and act against the invading aggressors, whilst the latter is little more than a timid girl who is drawn along by his rhetoric. Most of this is told in the form of flashbacks as Lee bookends the narrative with two sections which happen in, what is for the characters, the present day. The year is 1942 and the setting is that of Japanese occupied Shanghai. Here Wong is calmly playing mah jong with the wives of various collaborating officials. This introduction of her as a prim proper lady bedecked in the latest finery is all the more startling once the memory of who she once was is shown to us. It is a revelation that such an actress as Wei Tang was found (appearing here in her first cinematic role) to take on the role of Wong Chai Chi. As soon as the make-up is removed, the years fall off her and it is totally believable that she led a sheltered existence as a student. She exudes innocence during these early flashbacks and yet, once she is duty bound to transform, she at once becomes a figure of subtle elegance that is almost totally unrecognisable from her former self.

The central themes explored are all powerful and unflinchingly realistic in their portrayal. There are no two dimensional characters, as each has been given layers that are painstakingly removed by Lee. The slow burning momentum of the piece never stalls, yet merely keeps rolling forward, pushing towards an inevitable conclusion. The sense of dread and anticipation makes for a palpable atmosphere of strained nerves. Watching someone hold up the falsehood of a persona for large periods, always knowing that peril could be one slip of the tongue away is the material of classic espionage thrillers. The beauty of Lust, Caution is that whilst it contains such elements, it builds on them to become so much more. What starts out as a simple case of cat and mouse, with lines of morality clearly drawn, soon develops into a sordid tale of mistrust and duty. It is no great surprise that Lee uses a clip of the film Escape To Happiness (released in the U.S as Intermezzo: A Love Story) to show Wong's fragile emotions as it perfectly reflects her future of torn loyalties and unknown feelings. Perhaps the better example of this movie would be the Hitchcock thriller Notorious, as Lust, Caution almost perfectly mirrors its plot. The young woman sent to ensnare an enemy, her feelings for the man who has introduced her to this deadly game and the muddied waters that ensue, all are present here. That's not to say that this film lacks originality, rather that at times it can feel like a perfect homage to that classic of yesteryear.

Opposite the newly emergent talents of Wei Tang is the ever dependable Tony Leung. Perhaps better known for his numerous depictions of heroic figures, here he carries the heavy burden of making that which is despicable innately human. The script and the screen time favours the plight of our heroine, and rightly so, but Leung uses every ounce of talent to bring weight to each word he utters. His early monosyllabic nature is slowly teased out by Lee to reveal a character who has great depth. Each moment in which he features becomes akin to a piece of a jigsaw puzzle, with the end frame being as close to seeing the final picture as we are allowed. The graphic sex scenes are profoundly important to understanding his persona and neuroses, as they become the few instances in which he is in any way vulnerable. This tying of physical and emotional nakedness has been tried many times before but rarely does it work as well as it does here. Far from being pornographic as some might say, these segments are creatively shot and never deviate towards the purpose of mere titillation. Though there will always be the lingering feeling that the production could have been made without them, the fact is it would not have been the same film. They are an intrinsic part of the puzzle and show a progression of character and thus push the narrative forward. They become a form of duel through which much can be read about their states of mind, from the early unease and need for power of Yee, to the later twisted forms which perfectly embody their now tangled relationship.

First rate acting, intuitive direction and a compelling story accumulate to make a film that is distinctly memorable. It evokes the atmosphere of the great romances of the war era and yet holds an edge of true danger. The way in which Lee draws us into this web of intrigue, with what feels to be light hearted whimsy and idealistic verve makes the first half of the film feel like an acting project by sixth formers, an elaborate jape with a conclusion nowhere in sight. Once the first act of violence is committed though, the moment of no return has clearly been passed. In a scene that drags in its bloodshed, much of the simplistic notions of a clean war against oppressors are extinguished as a cold hard reality rains down upon the youngsters' heads. There are no simplicities to be found here as this moment typifies. What Lee has orchestrated is a cat's cradle of intertwining emotions and unsettled personalities, all with their own neuroses and issues. Like the games of mah jong that Wong always seems to lose, as we approach the end, there is the overwhelming feeling that whether her mission is accomplished or not, it won't be a success in which she will find great joy. The layers to this film are in want of far greater exploration than is possible here, but the one fact which is abundantly clear and needs little explanation is this film's claim to be a future classic. Powerfully emotional and beautifully executed in every way.