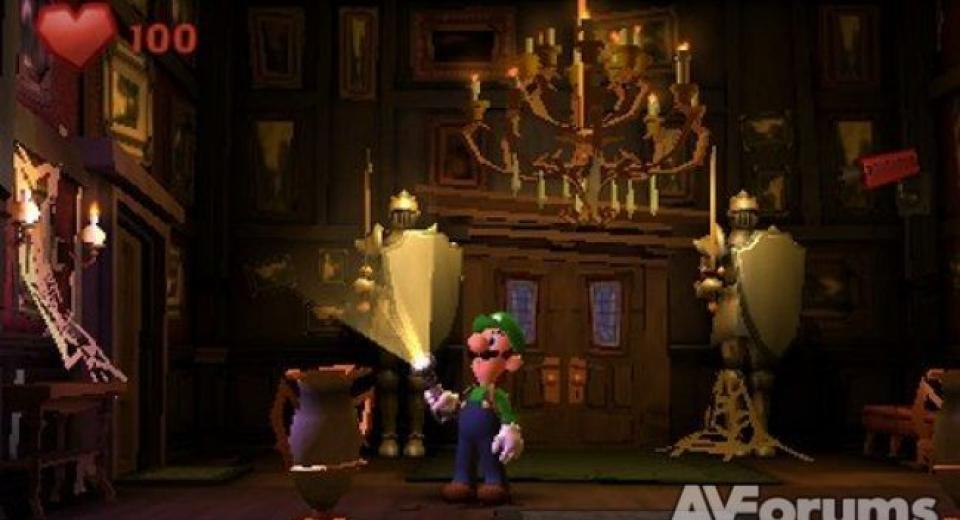 Always the bridesmaid, never the bride, poor old Luigi has played the faithful sidekick for many years now, leaping two paces behind his portly brother. What should have been his breakthrough solo outing - Luigi’s Mansion on the GameCube - was met with some trepidation from gamers accustomed to Nintendo consoles launching with a Mario title, the feeling being that the more famous sibling’s presence equates to quality with the Big N. Well, the long drink of water is back, perhaps to set the record straight, but more importantly to scaredy-cat his way through yet more ghostly encounters, this time on the 3DS.

Development duties have shifted hands from Nintendo to a trusted studio, Next Level Games, who’ve shown an aptitude for synching in to what is expected of a Nintendo title, having gained significant acclaim for their work on Mario’s recent football outings as well as bringing the old-school thrills of Punch-Out!! back on the Wii. The stick-or-twist dilemma with Luigi’s Mansion - good atmosphere but falling just short of greatness - has been deftly handled, with the emphasis clearly on adding more methods of interaction and some much needed length to the game, whilst keeping the Cat and the Canary feel of humorous cliches and haunted house hilarity. If anything, the animation of Luigi  - shown off well by the dynamic camera that pulls in close at all the right moments - really does make him start to appear the more interesting brother. Like the protagonists of the LEGO franchise, the developers have wrung a surprising amount of character out of small touches and the mute figure with which they have to work. A sudden push of the circle pad to evade a spectre brings with it a lifted cap and a cartoonish bumbling run.

The bespectacled, mono-toothed Professor E. Gadd is once again calling the shots, keeping in contact with you on your “Dual Scream”, which has replaced the old “Game Boy Horror” as a communication/navigation device. His research into the paranormal has come a cropper due to the Dark Moon - an orbital body capable of pacifying nearby ghosts - shattering, and he needs a willing fool to act as his gofer. The old shard collection ruse may be well worn, but the game plays on cliches well, whilst throwing in some novel touches that fit the theme, most notably with the new equipment that the uber-quiffed boffin tasks you with retrieving.

In addition to your new Poltergust 5000 (the 3000 model is so 2002!) your main weapon against all things ghoulish will be your Strobulb flash. This slightly replaces the original game’s use of the flashlight as a means to highlight ghosts; Luigi keeps his torch but his new kit is capable of firing an intense flash that can be charged for locating unseen spirits as well as destroying smaller mansion pests such as bats, spiders and mice. A fancy Dark Light Device works like an augmented torch, illuminating objects that have been hidden to the naked eye by the spirits. These vanished items can range from the basic, such as furniture to open in the hope of coins, to the more vital like doorways. One of the prime criticisms of the original Luigi’s Mansion was the sheer brevity of it all, lasting around the six hour mark (and that’s probably being a bit generous). Next Level have countered this not only by adding in new equipment but also by raising the replay factor with the lure of hidden items. Stages are re-used, but subtly changed in some aspects, so going back and exploring once you’re fully kitted out is worth it to be able to see everything that’s been inventively woven into the fabric of the locale. You can blast through the quests, but the game has been designed with an atmosphere that you need to buy into, appreciating the charming mix of cartoonish creaky floorboards, secret doorways and over-emphasised tippy-toe animations.

The gameplay is still essentially a bizarre combative fishing game enveloped in exploration. Make your way through the rooms, solve a puzzle, find the key, backtrack and finally reveal the ghost to capture; it all ends in the same reel-’em-in fashion, with your vacuum-powered Poltergust sucking the spectres towards you whilst you brace the circle pad in the opposite direction. Without the second analogue stick of the GameCube it feels far easier to coordinate, but the difficulty ramps up when you tackle more than one foe. There is one noteworthy 3DS control feature, and that’s the utilisation of the gyro. It’s used to aim your equipment - or gaze -  up or down (conversely you can use the X/B buttons), looking around when peering through windows and balancing as Luigi teeters along narrow walkways. It’s implemented very well, but it does require you turn off the 3D function as angling the screen negates any view of a supposed third dimension.

If the core of enemy combat is simple, then boss battles may just surprise you, as they’re sometimes devious in design. Due to Luigi’s somewhat restricted mobility (even when running) the old repetition of evading and hitting a weak-point wouldn’t have been satisfactory. The injection of puzzle mechanics adds a hint of the cerebral, as it becomes necessary to tinker a little with your environment; which, after all, is what’s at the heart of the game. Next Level have also added in a multiplayer option - either via online or local play -allowing you to tackle the “Thrill Tower”, housing multiple levels of (up to) 4-player co-op ghostbusting. Choose how many levels you wish to go through and what the specified task will be, and the randomly generated floors will provide an arena for you to hunt either ghosts, ghost dogs or merely the exit before the time runs out. Without chat you’re left to communicate with pre-set D-Pad phrases; a bit clunky, but “help” is always a good cry when attention is needed.

It’s functional and quite fun, but appears like an addition intended to negate any fears of a lack of longevity. The environments can’t match the ingenious design of the story mode, and though I noted no lag, getting four players in a quick game wasn’t as easy as you’d think.  The abilities you have are very much designed for the single-player, as such the games often descend more into competitive rather than cooperative ghost hunting, meaning failing a floor has a greater probability. One player contracting a curse (which inverts all input controls) can decimate a team, so giving fellow players a wider berth starts to seem even more of a safe option.

Give up the ghost

Luigi’s Mansion 2 is not just a good sequel - rectifying the kinks and polishing the formula of its predecessor - but a great game outright. Exploration and environmental puzzle-solving meets simple combat mechanics in a title that’s slick and prefect for the portable market. Above all, it’s fun. The haunted mansion vibe is well drawn out, and fears it may get repetitive are allayed by the developers’ continual drip-feeding of new methods of interaction.

The multiplayer is a brief distraction for when the quests start getting more complex and the difficulty rises, but it’s a time-filler rather than a killer feature, and best enjoyed with friends locally. If you’re on your own, you’d be far better served immersing yourself in the satisfying ghostly high-jinks of Luigi’s first truly stellar adventure.