Those magnificent men and their flying machines. 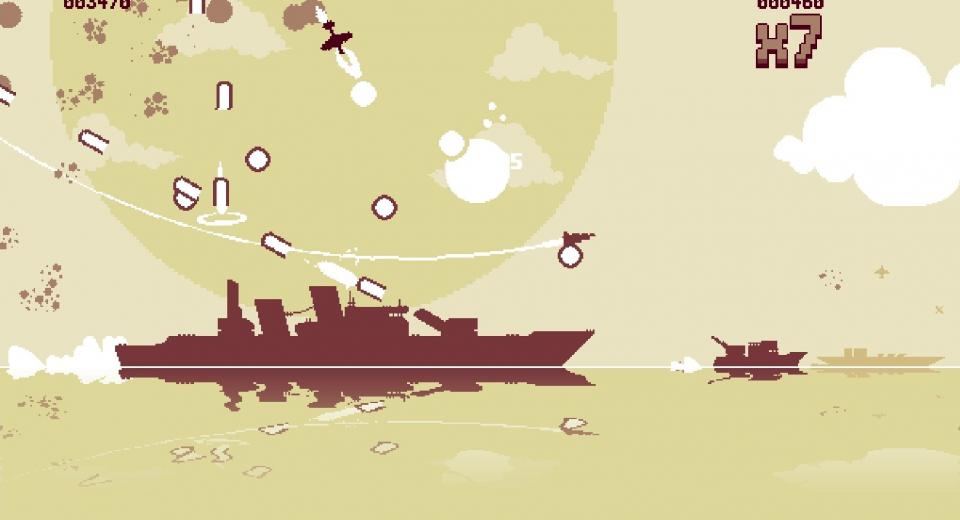 When it comes to control, feel goes a long way in games. If something doesn’t feel right, if it doesn’t move as you expect, then there’s a disconnect.

When it happens to you, your mind-set is always one of having to play through adversity as it instantly distances you from the experience. You have to learn not only how to play the game but how to play the controls, too.

But when it feels right, when time has obviously been spent polishing and refining such an innocuous thing as a button press, then it’s as though you’ve been wired directly into game itself.

Luftrausers has that in spades. Vlambeer have taken a plane whose wingspan can be measured in just a handful of pixels and given it great weight and elegance. With a very simple control scheme they hand the player the opportunity to take to the skies and pull off a host of heroic manoeuvres in the face of overwhelming odds and against a storm of bullets. Every time you launch from your carrier there’s immediately a sense of freedom and an urge to go pull tricks in the sepia sky.

It takes a while for this to click, however. The controls initially sound very much like Micro Machines of old, where one stick controls both acceleration and turning, whilst another button is given over to shooting. At this point the cocksure inner gamer takes over. The know-it-all most of us have hidden within us from years of handling joypads is there assuring us that, with such simple controls that we already know how to play, we’ve seen it all before. And to a certain degree, that fool is right. Your initial plane is light enough and fast enough to fly through the sky as though it were a child’s toy. Fingers jammed permanently down on the accelerator, you’ll buzz around effortlessly, treating Newton and his fruit with brazen contempt. To this end you’ll garner a certain degree of success, racking up a respectable score as you fly large arcs around pursuing squadrons and carry out cackling strafing runs on the ships below.

What forces a change in attitude is the moment you unlock a new body for your plane. Now there’s a choice. This new part is armoured, offering more protection but at a cost of slower movement. From the moment you take off you can feel the difference as your previously cavalier attitude to flying is now far more sluggish. Gravity tugs back as the plane banks at high speed and for the first time you begin to truly sense the mass, the physicality, behind every airborne object. This is no longer Micro Machines. The momentum every object possesses means that simply jinking out the way of incoming threats isn’t an option. This isn’t a twin-stick shooter. You can’t instantly throw you weight in a completely different direction, physics just doesn’t work like that. Find yourself flying headlong into a hail of bullets and there’s little you can do other than gently bank and hope you can weather the storm. Or so you think, for tied into the physics that will just as likely damn you there’s a subtle yet vital trick that can save your skin.

In the same insane way that when driving it is advised drivers should turn into a spin, pilots in trouble in Luftrausers should remove their finger from the throttle. For one, it quite sensibly stops you accelerating yet deeper into your predicament, and for another it greatly improves your turning rate. Whether to reposition your engine to boost you away from the threat or to just spin around to blast away at any squadron in pursuit, this light bulb moment can immediately be used to your advantage. This deft control of the engines is what will separate the rookies from the aces.

Every time you launch from your carrier there’s immediately a sense of freedom and an urge to go pull tricks in the sepia sky.
As soon as the sense of weight and the necessity not to constantly fly full throttle have been learnt then things open up. There’s an understanding of how to crank the most out of your craft and a joy in taking each new body for a spin as you test their weight and sense the delicate change in handling between models. Light craft may be able to speed away from danger, but their weightier brethren have their own skills. Their bulk used to gain possibly even a greater advantage as stalling them at the right moments has a far more dramatic effect, sending those deadly missiles screaming safely past you as gravity applies lifesaving brakes. It’s a wonderfully nuanced system.

You need physics as an ally too as there’s a whole army trying to kill you. Initial skirmishes see squadrons of tiny fighters swarm around you, reinforced by boats on the flat seas below, both taking pot shots with humorously over-sized bullets. Neither pose any really threat, being the cannon fodder of the opposing forces, but before too long they’re joined by a steelier set of adversaries. Aces in highly manoeuvrable jets, battleships that send up huge volleys of fire, and submarines launching guided missiles towards your location all join the battle, turning the sky into a very crowded place. The trick is keeping on top of proceedings, taking out smaller threats before they can overwhelm and picking off larger targets in between their waves of attack. It’s easier said than done however as each sortie typically only lasts a few minutes, with the tempo ramping up swiftly. In this battle against the odds planes are thankfully fitted with a generously swift recharging health bar, although as an interesting compromise it’ll only recharge when not firing. Expect a few sweaty palms as you disengage from a dogfight, hoping for clear skies in order to regain full health.

Throughout all of the carnage, your primary goal is to rack up as large a score as possible, most efficiently achieved by stringing together a continual series of kills to tot up your multiplier and earn huge points. However, what I found equally if not more rewarding was unlocking and experimenting with the host of extra plane parts. Weapons, body, and engines can all be swapped out to create a custom machine. From basic rapid firing machine guns through to more outlandish kamikaze hulls laced with nuclear explosives, there are dozens of combinations to choose from. If you can imagine a reinforced, laser-firing jet that happens to have an engine that doubles as a gun, then you can picture my ride.

It is more than just a customiser, though, as each new part unlocks new missions. Equipping the Stalker body, designed specifically for ramming enemy craft, may task you with destroying 30 enemies without ever firing, whilst the anti-grav engine could request that you achieve a similar feat when stalling. It’s a simple touch that encourages experimentation.

They go up diddley up-up

They go down diddley down-down

In Luftrausers, Vlambeer have created a modern arcade classic. Not only does it offer a sizeable portion of replayability and experimentation with its moreish gameplay and wide array of plane parts respectively, but it combines them with planes that handle like a dream.

Wrapped inside a gorgeously minimalist colour palette, they manage to get across equally the chaos of the dog fight and also the serenity of flight. Looping through the open skies before skimming low across the sea, kicking up spray in your wake, feels majestic. And yet they trade nothing in handing you the controls of a fighter plane that through torrents of fire can also duke and evade with the best of them.