Stick around to the very end of the credits 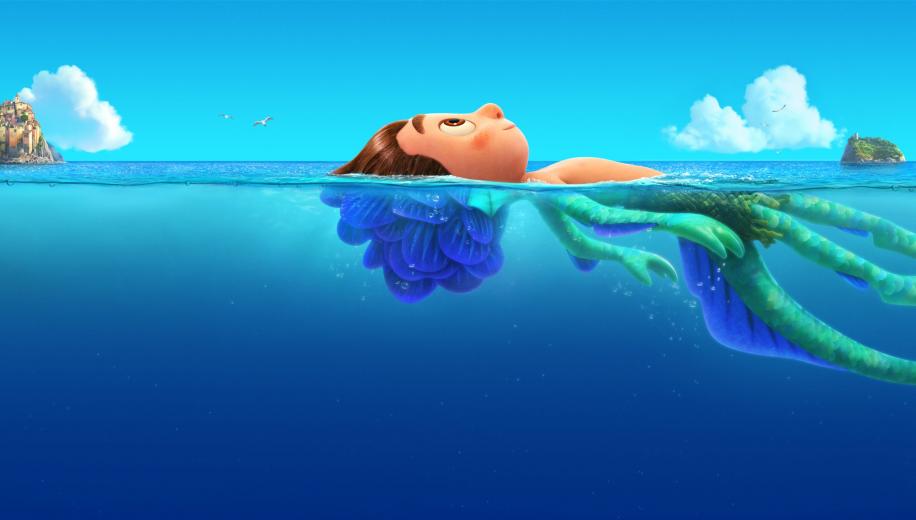 Pixar shoots for Italian culture, blending in Aardman-meets-Studio Ghibli-style animation, and pulls off a love letter to everything from Fellini to Cinema Paradiso.

The second Pixar film to go straight to Disney+ after 2020's (un)surprisingly powerful Soul, and Disney/Pixar work their magic once again, with a heartwarming tale of childhood friendship and celebrating being different, all cast against a richly cultured 50s Italian Riviera fishing village setting. It's perhaps slighter than normal for the studio, which reliably churns out classic modern fables with tearjerking moments of raw emotion, but it's a warmly engaging family adventure nonetheless, which hits some strong notes.

... a warmly engaging family adventure which hits some strong notes

Luca is a sea monster who lives a quietly repressed life in his underwater farming village, warned about the real monsters that patrol the area (fisherman in boats) but still yearning to explore life beyond his tiny village. After bumping into another sea dweller, Alberto, he finds himself drawn into a colourful life on the shore, where things are very different, but where they are constantly at risk of being discovered by humans for what they truly are.

Luca comes to the UK as part of your Disney Plus subscription, at no additional Premium cost (much like Soul), presented in 1.85:1 widescreen, 4K Dolby Vision with Dolby Atmos too. It's a vibrantly rich affair, not least in the colourful design of the lead boys - at least in their underwater guise - and the sun-blessed Riviera is perfectly dressed in rustic 50's tones. Lovely blue skies, deep blue seas, it's a gorgeous looking production. The animation shoots for a rather odd blend of Aardman's Wallace & Gromit stop-motion (and character design) and Hayao Miyazaki's Studio Ghibli work, which undoubtedly looks different even if it doesn't always work, and certainly - strangely - suits the Italian period setting.

... Luca is certainly a welcome new production to enjoy from the comfort of your own home over the weekend

Once again highlighting Disney/Pixar's impressive ability to go wide in representation and lovingly absorb and pay tribute to some beautifully different cultures, pulling them effortlessly under the common umbrella of the quintessential Disney/Pixar animation (from Disney's Moana and Raya to Pixar's Coco and the aforementioned Soul), Luca is very solid work from them. The debut directorial effort of Enrico Casarosa, who drew from his own personal childhood experiences and friendships and fashioned these memories into an homage to a succession of Fellini features, as well as coming-of-age tales like Stand by Me and Cinema Paradiso. There's love put into this film, and you can feel it, and a number of Italian voice actors lend the production a little more authenticity even if Maya Rudolph is the most recognisable Hollywood addition, and none other than Sasha Baron Cohen steals the show with a brief cameo (stick around right to the very end of the credits!).

What's missing is perhaps that final spark of Pixar magic. You know, the one that'll lead you to involuntarily turn on the waterworks, which has adorned even the most left-field productions from Disney and Pixar (the end of Onward). Luca gets close, damn close, particularly in its final shot, but there is something undeniably familiar here, possibly right from the outset (mirroring Moana, only being drawn out of the water, rather than towards it, or perhaps even closely Ariel's desperation to escape to - and then later be accepted by - land dwellers) and this perhaps lessens the journey, just slightly, and prevents it from even approaching top tier work from Pixar. It carries that hint of predictability right through to the final act - could it have possibly ended any other way? No, but still basically every Disney/Pixar animation finds a way to surprise... until now, that is. But who can complain really; much like the MCU, Disney proper, or Disney Animations, Pixar - even sub-stunning - is a cut above most everything else out there, and Luca is certainly a welcome new production to enjoy from the comfort of your own home over the weekend. It's sweet and charming and well worth watching.

Luca comes to the UK courtesy of Disney, in Dolby Vision 4K with Dolby Atmos, available with your Disney Plus Subscription from 18th June 2021.
﻿