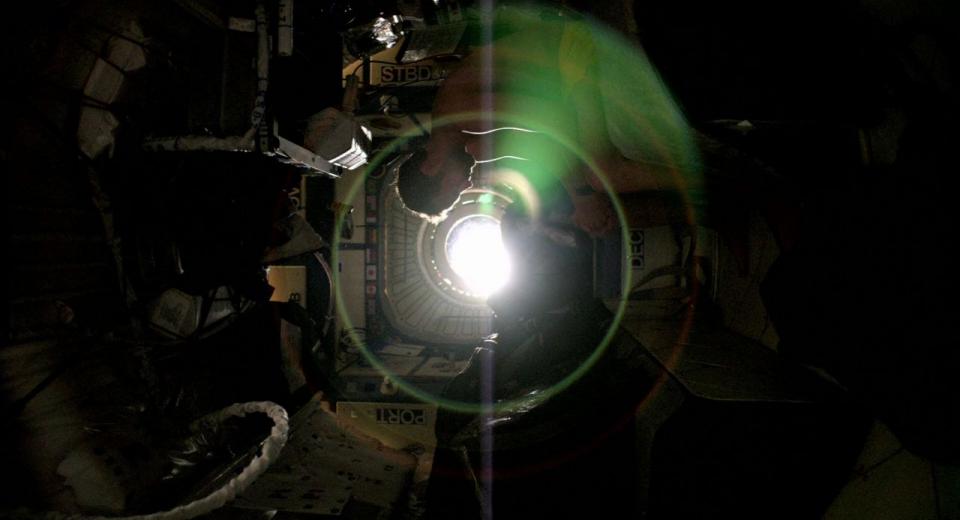 “Does it bother you that we are not real?”

Despite what many writers and directors will try to promote, pretty much all movies are quite formulaic. The beginning will set the scene, identify the era, genre, main characters and plot points, the middle will develop the story and then set us up for the end. Heroes will generally survive, but if they do die, it will be during the finale, usually in the arms of their significant love interest. Anything outside of these parameters is considered quite avant-garde, so quite where does this leave Will Eubank’s Love?

To call this a sci-fi movie is to misunderstand quite what Eubank was trying to achieve. It is much more of a conceptual arts piece set to the weird and wonderful sounds of alternative rock super group Angels and Airways. In fact as the band produced the movie, one could almost think of it as an extended music video! Led by Blink 182 guitarist Tom DeLonge, Angels and Airways is an outlet for what we used to call prog rock, with their output mainly conceptual albums in a similar vein to Pink Floyd. Be warned then, this is not casual viewing in the same way alternative rock is not easy listening, you really need to watch every microsecond to gain any understanding or context of this piece.

It is difficult to write any sort of cohesive synopsis, as the story is so disjointed, it would sound like a real mess, so instead I will try to give you an overview of the various elements and recurring themes within the movie.

The film opens with a flashback to the American Civil War. A Union regiment is pinned down by overwhelming Confederate forces and faces certain death. Their enigmatic General selects one of his officers – Captain Briggs (Lee Horne) to investigate a strange object that has been found, with the instruction to document his journey and the discovery itself. He escapes the attackers and heads away on his mission.

Fast forward to 2039 and astronaut Lee Miller (Gunner Wright) is sent alone to the abandoned for twenty years International Space Station to re-activate it. While in his enforced solitary exile, something goes seriously wrong on earth (We hear hints of mass civil unrest) and the ability for him to be brought home is lost. With his life support fading and all hopes of rescue gone, Miller’s starts to experience hallucinations based upon Polaroids of former ISS crew members. His behaviour becomes increasingly irrational as the weeks, months and years go on.

So the first part of this film set during the American Civil War has very little to do with setting up the main storyline, set on the ISS. The main link we get is that Miller finds Captain Brigg’s journal hidden aboard the ISS. Interspersed with this, we find apparently unconnected interviews, containing video vignettes to illustrate points discussed in the monologues.

Confused? You will be. Most of the movie, once Miller learns he is trapped in space, is really more of a journey into his decaying sanity. Just what would go through your mind, knowing that your death is unavoidable and that you will never see another soul ever again, despite being just 240 miles from human contact? This is in stark contrast to the Civil War scenes, where we get some insight into collective destruction, fear, bloodshed and of course, death.

Looking at the production of the movie itself, I had to keep reminding myself that this was made for reportedly less than $1 Million. The Civil War scenes look absolutely stunning, with nothing to belie the low budget nature of the production. Not only do the fight scenes look amazing, but they transmit the horror, courage and chaos of a battle in one of the most effective ways I have seen. The ISS was constructed from pieces of junk, household items and old computer parts. This could of course left it looking like something from an early Doctor Who episode, but such is the attention to detail, that you could be persuaded it is an orbiting space station. With no cheap way to simulate zero G, Eubank and Wright have opted to ignore this phenomena and so space cadet Wright remains firmly planted to the deck.

Without revealing the ending of the movie, the story does have some form of closure and that is a good thing. It maybe feels a little hurried, but it kind of makes sense. The style of writing in the film does remind me of early sci-fi short stories. Anybody familiar with Asimov, Harrison or EE “Doc” Smith will recognise the disconnected story elements and the seemingly lacking of coherence. In the same way that many of these novels are hard to read, this film is equally hard to watch. Don’t let this put you off, as it is really worth the effort.

At just eighty minutes, this is short as movies go, but long for a conceptual arts piece. Take your pick as to what it actually is, as it really defies common classification. Some have compared it to 2001 – A Space Odyssey, but this is unfair. Clarke’s writings were much more ordered than some of his contemporaries and the film is therefore easier to follow. I am still at a loss myself, but it does not really matter. Think of it as a scrap book of memories and recollections, (a quote from the movie) enjoy the weird, spacey music and try to forget your preconceptions about what makes us tick.