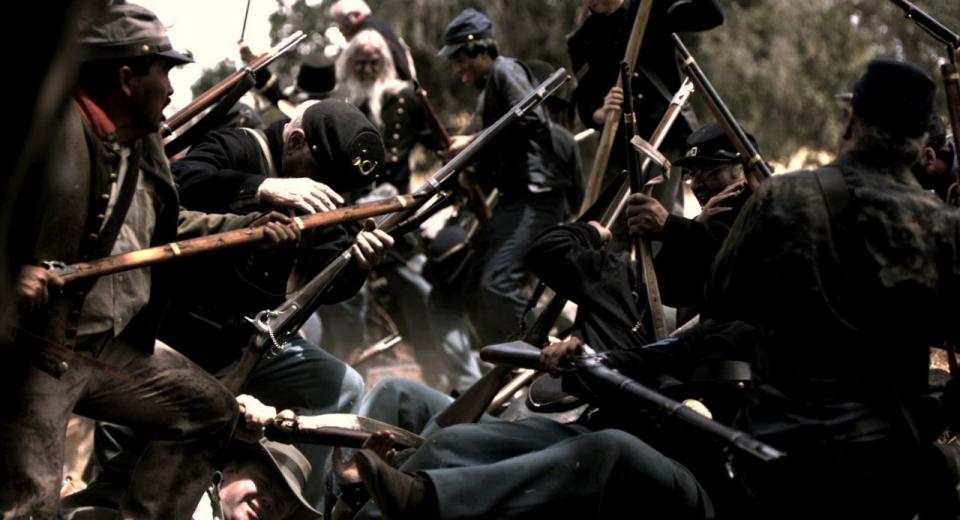 While the sets, fight scenes and sound do not reflect the budget nature of this movie, unfortunately, the picture has suffered somewhat. The 1.85:1 AVC-MPEG region B only transfer is extremely variable in quality, due in part to its 35mm film roots. There is a good reason why most budget movies are shot digitally these days and that is because it is not such a precise science, with a least a couple of stops of latitude over 35mm. Some scenes are simply too dark, with very little in the way of shadow detail and far too much film grain where exposure has been pushed. This is such a pity, because the very next shot can look absolutely stunning.

The slow-motion battle scenes are utterly brilliant in their intensity with clever camerawork, absorbing framing and a gritty, realistic look, but come straight after some scenes in an old mine that look awful, with over saturated colour, lack of detail, colour banding, the works. I would compare this to some of those low quality pirate movies made from a 35mm print and not adjusted for video colour space correctly. I normally review movies with the room pretty much blacked out, but this is hardly a typical home viewing situation. For this movie though, you will need to draw the curtains to see really anything at all in a couple of the worst shots. Colour grading is basically the issue throughout the movie, although it is much worse at some times than others.

Once the action moves to the ISS and also most of the hallucination sequences, things do improve somewhat, with better initial exposure and less obvious shot rescue required. The visual effects are also quite impressive, with just a few looking like cheap After Effects. Subtle things like extra explosions and gun shots are added in during the civil war scenes, as well as background mattes for the ISS shots and expansive digital modelling of objects towards the end of the movie. The use of a number of different visual effects companies has prevented one “house style” from pervading the movie, with plenty of different techniques used.

Don’t let the poor picture score put you off, you will become sufficiently absorbed into the movie to start to ignore the obvious issues to a greater extent. As you might expect for a movie produced by creative and talented musicians, the sound track is simply superb. The 5.1 DTS-HD MA stream is dynamic, full frequency, stunningly mixed and totally matches the movie.

The score is predominantly guitar led alternative rock – no surprises given the make up of Angels and Airwaves and features many tracks from their albums Love part 1 & part 2. It is very full on and extremely loud and with massive bass extension, so any weaknesses in your system will have your speakers running for cover! If, like my review system, all your speakers run full range with no bass management, be ready to catch the bass drivers of your mains, as no quarter is given. From low throbbing bass to huge explosions, this is all routed to both the front and surround speakers, as well as the LFE channel! The only down side of all this low frequency energy is it could possibly rob your system of power to fully deliver the more detailed upper registers and spoken word. The surround mix is subtle, but quite rich. Most effects do not need precise placement, being more ambient, but you really do feel absorbed into the sound field.

In the right environment, this is a powerful sound track and for all its bass weight, very nicely balanced, but it will show up any weaknesses in your system all too prominently. I dread to think what a small sound bar or TV speakers would make of this! Following some poorly transferred trailers – all exhibiting conversion artefacts, we get a simple menu with just the UK trailer as an extra to the usual scene selection. This is very disappointing as a quick Google will take you to Will Eubank’s Vimeo page, which has a number of movie related vignettes and even some behind the scenes footage. This would have made a huge difference to the movie, possibly even helping to explain the movie somewhat. A directors commentary would also have been appreciated as well here. As conceptual arts movies go, this one is up with the best. It is not easy watching and trying to grasp all the nuances is just about impossible in one viewing. The cinema release was incredibly limited and no doubt this will hardly become a huge run on Blu-ray either. The fact remains though, it is a well-made, thoughtful piece that I for one enjoyed.

There is no escaping the poor picture quality at times, but the sound track at least in part makes up for this. The lack of extras when so much readily exists is also a disappointment, as this sort of film appeals to the geeks amongst us and we like to know how it was made and what made the director tick.

While this may not be mainstream viewing, if you have a liking for sci-fi and more challenging viewing material, give this movie a try.