Elements of Zombieland and elements of How to Train Your Dragon, coming together to make something not as good as either. 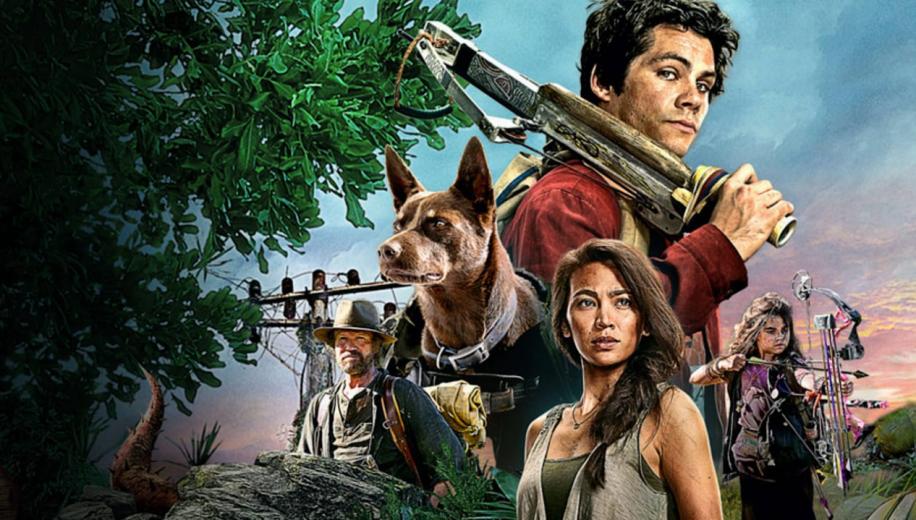 Predictability isn’t the worst crime a movie can commit. There’s plenty of opportunity to have fun on a ride, even if you can see where it’s going (I must really want to go to a theme park today) but there’s no denying that it’s an element you have to struggle against if you’re going to properly engage in a story. Michael Matthews' second film (after Five Fingers for Marseilles, go figure) doesn’t even seem to attempt the struggle. What that means is that even if you haven’t seen Love and Monsters… you’ve seen Love and Monsters.

Joel Dawson is a ground zero survivor of the monster-pocalypse. Separated from his girlfriend when the giant insects attacked, he has spent the last seven years trying to work out a way to get back to her, but with no discernible monster-fighting skills, there’s no way Joel would survive ten minutes out in the open. To make matters worse, everyone in his bunker-dwelling colony is already paired off leaving him feeling distinctly like a 13th wheel. Until the day comes when he decides enough is enough and he sets out on the 85-mile journey through the death-traps of the post-apocalyptic world, to his old girlfriend’s colony.

There’s a lot of fun to be had in the concept – a family friendly monsters + rom-com adventure – and there’s the pedigree in the writers' room to support it. Brian Duffield, writer of the devilishly fun The Babysitter, teams up with co-writer Matthew Robinson, who knocked out a surprisingly acceptable live-action adventure for Dora the Explorer, but the two of them struggle to really have fun with their own ideas. Instead, they take the story down some extremely well-worn paths, essentially running it though a ‘screenplay writing 101’ course, ending up with something that feels very solidly constructed but ultimately a bit lifeless.

The main problem with Love and Monsters is that it doesn’t have an idea that is its own; it’s not a new take, there’s no spin on the ideas, they are simply lifted and presented as is. Not a single event in the entire movie holds any surprises whatsoever so that even the least canny watcher will be pre-empting the majority of the plot developments seconds (or, in some cases, up to half an hour) before they happen. It turns a film that could have been a fun monster B-movie/rom-com mash up into an exercise in guessing when exactly all those extremely clearly telegraphed shoes are going to drop.

It’s not without charm, but even the charm feels half-inched from other, better, films. Dylan O’Brien’s lead character, Joel Dawson, is a peg leg and a floppy CGI haircut away from Jay Baruchel’s Hiccup from How to Train Your Dragon. From his seeming ineptitude and cowardice in the face of monsters, to his obsessive documenting and sketching to better understand the beasts, he feels like a character we’ve met before. In fact, seams of Chris Sanders’ hit animation run right through this movie, punctuated by notes of Zombieland, particularly heinous pick-ups from which include Joel’s narration of rules for survival while in the presence of a grizzled survival nut and his surrogate daughter (Michael Rooker playing… well, Michael Rooker. No complaints here.)

In fairness to Dylan O’Brien, he’s got the loveable loser character down. He makes the silly twen-teenager stuff work, keeping Joel just on the right side of annoying, and it’s certainly a change from the desperately humourless Maze Runner movies that made his name. He even has some nice chemistry with Jessica Henwick (Colleen Wing in the Netflix Marvel shows) who plays his old flame Aimee. But that’s really as far as the human interactions go. We spend almost enough time with Michael Rooker to care about him, and a sort of brother-sister connection made with no-nonsense survivalist Minnow (Ariana Greenblatt) is the closest the film offers to a character arc beyond Joel’s need to grow up. Sci-fi and fantasy legend Bruce Spence even shows up for a couple of minutes, so there’s that to look forward to!

The monster designs too are often great, when they’re not cribbed from elsewhere, and a couple of them really play into a pure B-movie style: the giant ants, the toad and the snail are all particularly fun. But that’s sort of it…

...a jigsaw made from pieces of other movies.

Once everything that you know is going to happen has happened, there’s an anti-climactic denouement - which, if you don’t guess how it’s going to end, I don’t know what I can do for you - followed by a rather odd epilogue with a good old fashioned attempt a joke. Which inevitably falls flat.

Love and Monsters comes to the UK via Netflix which acquired the distribution rights, presented with an aspect ratio of 2.35:1 in HD, despite having received a shiny 4K HDR disc release in the US. The palette lends itself well to an HDR grade too, with some great forested landscapes and what should be, if nothing else, a visually successful climax on the beach. The DD 5.1 soundtrack is also a downgrade from the 7.1 track available on the disc release, though there's still a good soundstage for a couple of the monster encounters.

It’s not above this writer’s notice that it barely counts as criticism to simply say “seen it,” but the fact is that the entire movie feels like something you’ve watched before, and not in a nebulous ‘we know this sort of thing’ way, it literally feels like a jigsaw made from pieces of other movies.

But, look. Maybe you haven’t seen How To Train your Dragon, or Zombieland, or A Quiet Place, or Monsters, or It Comes at Night, or Warm Bodies, or Annihilation, or Tremors, or Wall-E, but even then, you’re probably still going to sit back and say “I know where this is going.”

... Really? You haven’t seen any of those movies? Yikes.

Love and Monsters is now streaming on Netflix.