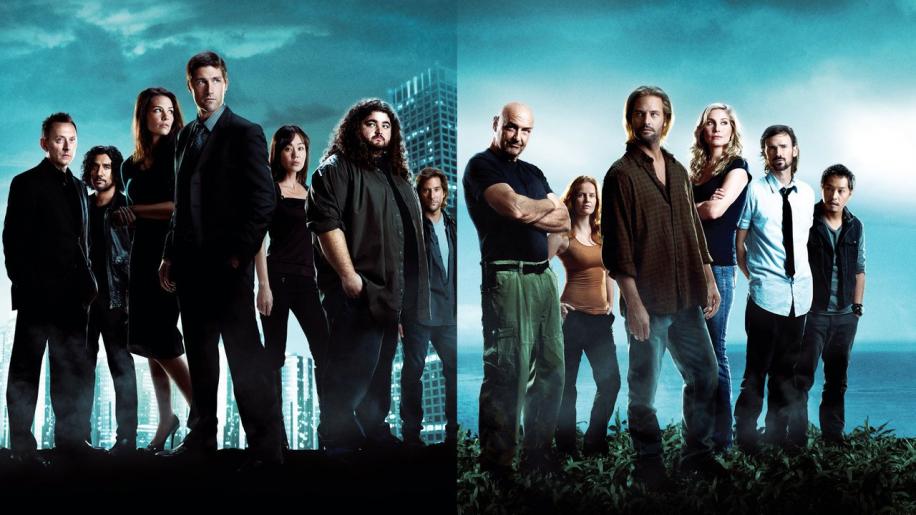 Now, I must admit, I have a new DLP TV which is revealing much more detail than my previous set. This being the case, Lost still has a fantastic picture that is free from just about every foible known to humanity, save a small amount of haloing when darker colours are seen against the bright sky. Colours are perhaps a little too artificially vibrant, look to the very green forest blanketed mountains, but that contributes to the sometimes surreal nature of the show. Flesh tomes are a little too red, and some forest shots look to flat and blurred on horizontal pans.

But this is being picky, especially as the detail levels are normally very high indeed. Charlie's face after being stung by bees is realised with a clarity I have never seen on a TV program DVD. Black levels are very good, which is just as well as there are some dark night scenes that would be lost (if you'll excuse the pun) in a soup of shadowy indiscretion, otherwise. All in all, a benchmark release. I don't know why, but TV programs just don't seem to like 5.1 soundtracks. Whether a lack of imagination, budget or both, I have never really heard a decent soundtrack on a TV series DVD release. Lost is no exception. Vocals are clear with a realistic timbre, but lack a sharp clarity present in movie soundtracks like Master and Commander. Bass is lacking in same areas, but present in others, making me think that some episodes are handled by different sound mixers. Rear effect channels are used sparingly and hardly ever with vigour, save some scenes in the pilot episode. Music remains effective, if subdued, the island's SFX taking over as a natural ambience. Well, where to start? The Genesis of Lost is a pretty good insight into how the program came to be. Someone wanted to make “Castaway the Movie” and while the idea may at first seem to be a good one, many thought that the kernel of the series wouldn't last. So, JJ Abrams of Alias fame and writer/dreator Damon Lindelof were approached to add some spice to the proposal. So, Genesis charts the creation and evolution of the program allowing us to see what goes into creating a masterpiece of TV entertainment.

Designing a Disaster shows us just why the initial wreckage of the plane looks so real: it's a real plane. Apparently the production bought an obsolete plane in Australia and broke it apart. Shipped the wreckage to Pearl Harbour and transported it to the other side of the island. All the set dressing, the cables, shrapnel, the falling wing are all real. The only thing that's fake are the engine's turbine rotors. The lengths that the crew went to, and just in time I may add, to get this to their location are outstanding.

Before they were Lost, to me, is fascinating. This extra depicts the casting process, and looks at how the actors came to play their parts. Indeed some parts were created for the actors when they auditioned. Actually seeing the characters emerge from the page and how some of the written persona's change was fascinating to watch. This extra includes raw auditions of the actors, which again is interesting to contrast to the final piece.

Welcome to Oahu: Making of the Pilot. These documentaries can sometimes be a little bland. This one isn't so much exciting, but it is a very detailed appraisal of how the pilot was created. I don't think that this is a bad extra, but there isn't anything new here.

The art of Mathew Fox is actually not bad. Maybe because I am an arty kind of person, but it is always nice to see the other creative outlets actors and crew have. This extra is a photo album of sorts with a commentary from Fox himself (who plays Jack).

On Location is an annex to the Pilot making of. It looks at behind the scenes shots of select episodes and is alright. This type of extra works best when there are a lot of creative “off camera” conversations with cast and crew and that is certainly the case, here.

Jimmy Kimmel Live on LostI assume that Jimmy Kimmel is one of those insufferable American talk show hosts (and more British ones, too - Jonathan Ross anyone?) where the host thinks he is really funny when he isn't. The only good thing about this extra is Dominic Monaghan singing an ad-libbed theme tune for Lost. Otherwise avoid, unless you like cheese too much.

Back Stage with Driveshaft more closely examines the whole Driveshaft back story. The rather unusual genesis of the “You all Everybody” one hit wonder song is revealed.

Lost Flashbacks fills in some of the back story from the characters of Claire, the Pilot and Sayid. While these scenes aren't bad, they are actually really good, they don't move the story on. Both take place before the crash and add a little texture to these three characters. Interesting asides but not compulsory viewing unless, of course, you are a fan like me.

Blooper Reel I love these. How better to look at how the cast gel together? Dominic Monaghan and Harold Perrineau in particular seem to have a few more funny bones in them than most folk. Lost is a fantastic achievement from all concerned. The production values are as good as anything I have seen, the acting is superlative. The ideas, the mystery, the candour, the shear audacity (polar bears??) of this series, make it one of the most exciting and important in years. Lost brings together the emotions that we all feel, the fear of the unknown, the comfort of some one we trust and discomfort of the ones we don't. There is mystery, the unnatural and above all, believability. That this is part of a TV series puts some big budget movies to shame, and very nearly every other TV series I can think of. Just buy the damn thing and see for yourself.