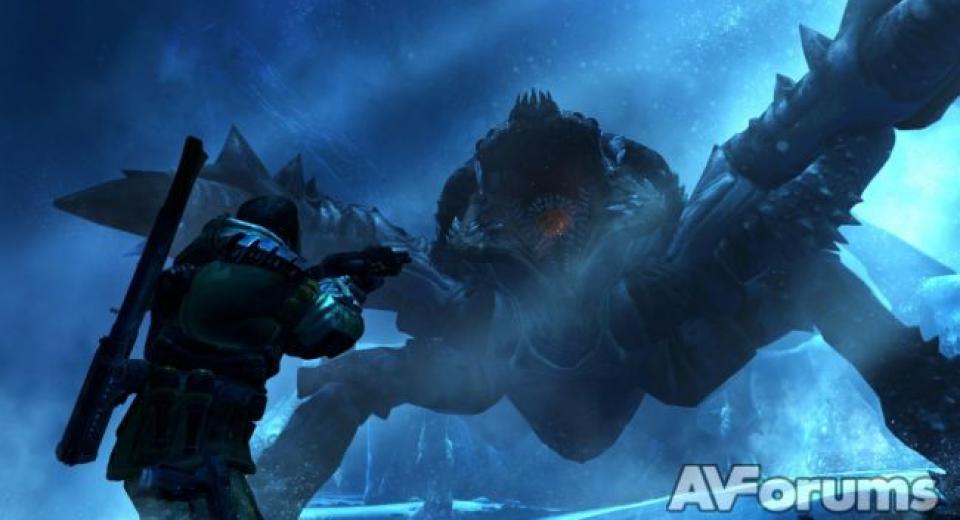 Capcom is going through changes. All its major franchises are experiencing a strange transition as they awkwardly try and evolve both their long established titles and a few of their newer creations. Some have been shining successes like Street Fighter IV whilst others like Resident Evil 6 have been downright disasters. When it comes to some of their younger properties the company has been turning to the west, handing new developers the keys and the opportunity to place their spin on an established game. Lost Planet 3 is the latest in these experiments.

This time it's Spark Unlimited at the helm, a relatively fresh faced developer whose recent track record doesn't inspire much confidence, with titles like "Legendary" and "Turning Point: Fall of Liberty" on the books. Still, their roots for better or worse lie in the Call of Duty and Medal of Honor franchises, influences which shine through clearly in this reboot. We start in the future with a dying father recounting his adventures to a tearful daughter and setting up the narrative device allowing you to play through what is essentially an extended flashback. Jim Peyton was part of the first group of colonists on EDN III; an ice rock of a planet which is seen as mankind's best hope of terra forming and escaping the increasingly hostile conditions on Earth. There are two snags; one is that EDN III can barely support life due to the freezing temperatures, luckily there is a form of thermal energy inherent to the planet called T-Eng which can be used to power everything from the massive mechs and weapons to kettles and radiators. Which leads to the second snag. While a lot of T-Eng can be mined directly from the planet, it also resides within the bodies of an indigenous species known as the Akrid; a race who show evolution the finger by proudly displaying their weak spots in luminous orange and don't seem particularly jazzed that you're here to literally drain thier life away.

It's Jim's job to harvest T-Eng using his rig, a precursor to the agile combat orientated Mechs (or Rigs as they are known here) the series is used to, Jim's rig was made to work; a lumbering hunk of metal complete with claws and drills. As he puts it, there are two things he cares about in this world, his family and his rig. Jim is a good every man character with a nice dose of personality. In fact, the best thing about Lost Planet is its characters, helping to mask loading between missions are some big brother diary room type monologues, mainly between Jim and his wife with a couple from other members of the cast included. They do a great job of of humanising the characters, explaining their motivations and in most cases making them quite likeable. Jim is endearing; putting aside his glorious winter beard, he has an almost southern American drawl as he delivers his "Sirs" and "Ma'ams" and the occasional polite quip. From the nice touch of the ever present photo of his wife in the cockpit, to the sincere delivery of his lonely sign off of "I love you babe", it's hard not to like Peyton.

Other characters are hit and miss, there's the robotic "at all costs" scientist, who views Peyton as a blunt instrument; the the rebel scientist, who distrusts their corporate overlords NEVEC; the wise cracking young engineer, who upgrades your rig with a cheeky grin; and the black sheep of the family in grumpy Frenchman Larouche, a rival contractor. Once you are unceremoniously dumped onto EDN III - and they make sure you have played a third person shooter before - you are unleashed in your rig into the environment. It's a pseudo open world made up of a series of tunnels and caves, more of which are opened up via story progress and upgrades to your rig such as a zip line allowing you to access previously blocked off areas. Plodding around in your rig is quite tedious, especially when you wander the same paths time and time again. As beautiful as the ice covered EDN III looks it begins to become mundane after a while. I'm not entirely sure that this is actually a bad thing, it captures the loneliness of the situation quite deftly, and the longer you spend in your personal home away from home, and the more familiar you become with your surroundings, the more comfortable you become.

This holds true for the rig combat which is a strange mix of first person melee attacks and timed QTEs (Quicktime Events). The smaller Akrid will simply get mushed underneath your feet but the medium and large sized critters will need a little more strategy as they can deal you damage, forcing you to evacuate your rig for a short period whilst it recovers, leaving you out in the cold with just your weapons to defend yourself. Rig combat is all about timing, blocking the attack of a larger Akrid will usually allow you to grab a limb and introduce your drill arm to its soft spot for some extra damage and eventually some T-Eng splattering finishing moves. After the first few times it loses its excitement as there aren't that many enemy types, so once you have the attack pattern down each encounter is simply slowing your progress.

Again, at first I thought it was bad design, but eventually I fell into my role of seasoned frontier man, stomping round the frozen tundra harvesting my T-Eng; when Akrid crossed my path I would routinely deal with them like it was nothing, just another day on the job. Sadly, the same can't be said of the standard combat, which religiously attended its Generic Third Person Shooting 101 class. It would have been nice if they had continued the theme from the rigs of "tools as weapons"; but then on top of the in game menu interface, ice planet setting and some major plot points; if they had, they really would have been staring those Dead Space 3 comparisons directly in the eye.

Instead, the usual list of weapons is present, of which you can choose two to take with you. When combat is near your rig you can use it as a portable locker to change weapons and replenish your ammo, and only having a mini map when in close proximity to your pride and joy is a nice touch. Like your rig, weapons can be upgraded when back at base for the usual improvements of larger clips, less recoil and more damage. The combat itself is also mundanely familiar, where the rig combat is an acceptable type of mundane because those activities are essentially what Jim does for a job, the fact he is so adept with all manner of weaponry seems out of character and comes across as a lazy mechanical choice.

Enemies range from head crab like annoyances through to the large screen filling behemoths you would prefer to be looking at from behind the safety of your rig's viewing glass. The concept remains the same though, pummel the weak spot, dodge the attack, rinse and repeat until dead. The game takes the obligatory twist of having you shoot humans at some point, but even before then they force you to use the cover mechanics in the indoor levels by introducing a spitting variety of Akrid which hides behind cover. An awkward zip line mechanic is also used to move through environments, but it's poorly implemented with a strangely stiff animation pulling towards your anchor point; it's never necessary in combat and rightly so in its current form

Mission designs are largely the same throughout. You can take a break from the main story to go off on some side missions, perhaps kill a certain type of Akrid for samples, tag different Akrid for research or just head out looking for trouble as you explore in search of T-Eng stashes in the heart of Akrid territory. The campaign is a fairly lengthy romp, coming in at 10+ hours if you stick to the critical path with at least another 3 or so added if you tackle all the side quests. The story and the characters will easily pull you through despite the ratio of on foot combat (in comparison to rig missions) rising far too high in the latter stages; at which point, if you have spent your T-Eng wisely, it shouldn't be much of a chore to run through, as you send enemies flying with the grenade launcher or explosive crossbow.

After the campaign, technically you can continue the fight on EDN:III with the multiplayer component. I could go into detail and give you the marketing spin on their new modes, which include a "narrative backdrop" to the action, or I could just break them down into their universal descriptors of Team Death Match, Capture the Flag, King of the Hill and Survival. The system of class building, multiplayer unlocks and weapons upgrades is as predictable as this sentence was. In the end though none of this is relevant, firstly because the multiplayer leans on the weakest part of the formula in the third person combat and finally because 7 days after release and after half an hour of playing I couldn't find more than 4 unique players to party up with. Like the planet it is set on and every other shooter that isn't one of the top 5 multiplayer shooters being played right now, Lost Planet 3's multiplayer is a lifeless wasteland.

Lost Planet 3 is halfway there, the characters and the story are surprisingly entertaining and the mech gameplay turns out to be underused but fun once you have figured out the controls, even if some more variety in the enemy types and tactics would have been welcome. More than anything, the sense of place and purpose of being a frontier colonist is captured very well. The filler comes in the form of the on-foot combat which offers nothing new or exciting and sticks to a worn path of third person shooting. As always the multiplayer is nothing but a misspent resource on the game's budget spreadsheet which you should treat as as an optional extra since it's likely you won't actually be able to play it as intended.

The reboot is largely successful, after the promising first title floundered and was followed by the release of the puzzling multiplayer focused Lost Planet 2, Spark Unlimited have crafted a far more character based experience underpinned with some solid if predictable mechanics. Once again the series makes a promising start; let's hope the transition to the sequel goes better than last time.