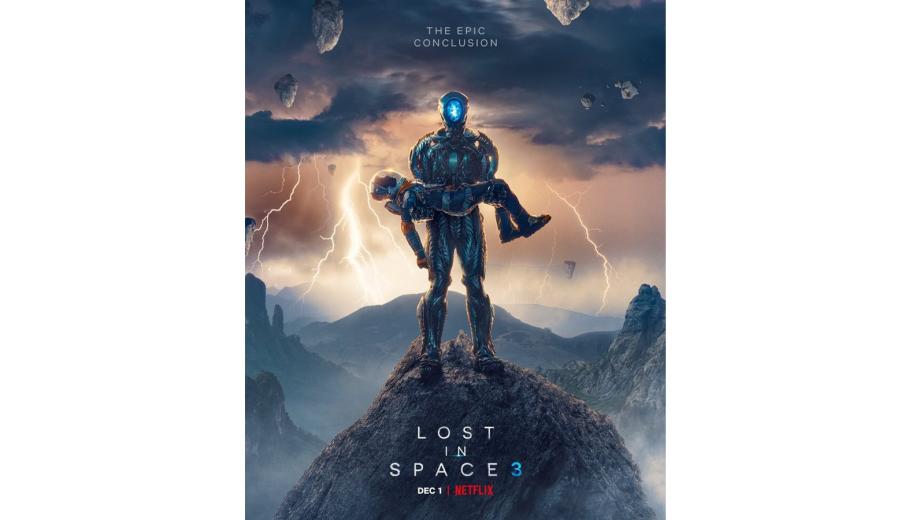 Netflix's big budget Lost in Space adaptation finds its way home for a solid final season as the Robot Wars come to a head, and Will Robinson finally grows up.

Well cast and boasting a hefty budget of almost movie-level effects, Lost in Space had all the right ingredients to provide a decent sci-fi adventure... except perhaps a script. Indeed much of the show appeared founded on the notion that every single member of its core family unit - the Robinsons - needs to be separated and placed in their own personalised life-or-death situation every single episode, which was a desperately exhausting decision. Eyes were rolled.

Thankfully the story eventually went somewhere, with the robot proving the most interesting element. And even if a second season packed with new characters and dozens of ships appeared to dilute the show further, the sophomore year did come good in the end, with just the right amount of jeopardy and big small screen space mayhem - as well as dozens of evil robots - to go out with a bang, ending on a massive cliffhanger with the adults and children of the show separated by the vastness of space as the former group makes a massive sacrifice in order to ensure the future of the human race.

Whilst the final season doesn't immediately give any indication of reuniting the family, given that series has always followed the core members around together, you know that sooner or later they will find a way to unite and get into more perilous situations either as a whole or individually. But with 8 episodes to round out this epic voyage, Lost in Space eventually coalesces into more than just temporary peril, with the Robinsons finally given a shot at reaching Alpha Centuri, and the evil robot SAR and his army in hot pursuit.

Lost in Space is another fabulous looking Netflix property, not a million miles away from something like Star Trek: Discovery, with some fairly impressive effects work put into the space sequences which we take for granted to look as good in TV shows as they do in movies these days, but is still nice to see delivered on. Dolby Atmos and 4K Dolby Vision work a treat, with a decent soundtrack and some excellent colour pop mostly courtesy of the opposing blue and orange good and bad robot energy signatures. Clearly determined to go out with a bang, they certainly didn't hold back on the scale of this final season.

Lost in Space still has an annoying proclivity to pad out threatening situations, but fans will find that par for the course by now

The final season of Lost in Space is largely split into two halves, exploring at first the survival of the children (and Dr. Smith) as they attempt to forge their own path to Alpha Centuri whilst the adults fend off the increasing attacks of the evil robot armies. Eventually the two paths cross, seeing the Robinsons once again placed front and centre - and together - as they face into the threat from the robots (who are obsessed with Will Robinson). This split format of the episodes leaves them slightly tighter than in the second half of the first season or the first half of the second season, with both halves of this final season packed with action and impact, and only a little fluff encroaching in on the runtime (the Jupiter-eating slug), and a few instances of eye-rolling multi-peril.

Lost in Space still has an annoying proclivity to pad out threatening situations (the land-mine chair) with tedious flashbacks, but fans will find that par for the course by now, and at least Will is mostly grown up and large and in charge, taking his faithful robot on a strong final arc with a view to getting his family home, even if he may have to sacrifice himself to ensure their safety...

It's a solid ending to a fitfully entertaining sci-fi romp which probably could have done with a hint less melodrama and contrived peril along the way but really was largely only working with the pretty flimsy founding format - and doing a pretty solid job considering.

Lost in Space Season 3 - The Final Season is available in 4K Dolby Vision and Dolby Atmos on Netflix now.