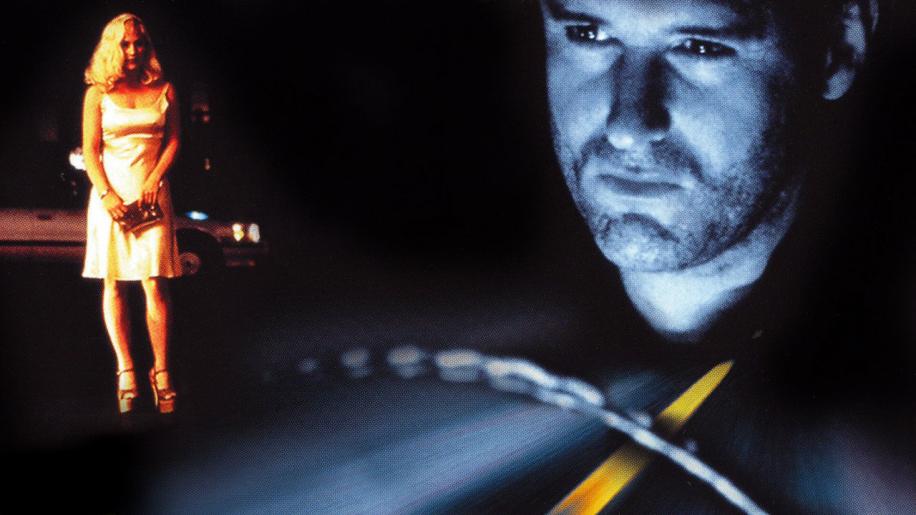 Starting off with an almost Twilight Zone-esque premise, David Lynch's 1996 horror/thriller Lost Highway then accelerates into the deeper, darker territory of the disturbed mind - an environment in which its creator thrives. From his explosive debut with the underground movie, and an absolute gem, Eraserhead, through the contemporary classics of Blue Velvet and Wild At Heart, and the beautifully grand monstrosity of Twin Peaks along with its hypnotic prequel Fire Walk With Me, David Lynch has carved a lonely path through the largely un-travelled area of existential mystery and nightmare, coining a subgenre proud to call itself Lynchian. A visual stylist with more ideas at work within the presentation of one single scene than many directors could dare hope to achieve in a lifetime, Lynch's work is critically lauded and wildly cultist, yet determinedly elusive and stretched perennially along the razor's edge of love it or loathe it. Despite forays into more standard genre fare with the magnificent The Elephant Man and the courageous misstep that was Dune, his best films have been dark and foreboding, playing up the sense that what we are seeing is not exactly - in fact, hardly ever - what is actually happening. With a unique eye for mesmerising imagery and indelible characterisation, he laces his impenetrable tales with disparate interpretations, twisted metaphors and juggled subtexts, seemingly knowing better than most the confused machinations of fractured minds, and the alarming situations that they can manufacture for themselves and for others. His style is often languid, his violence abruptly upsetting and his tone a trademarked reference to the miasma of a drug-fugue. Personally, I have always adored his decidedly adult movies and their stubborn refusal to be labelled or pigeon-holed, but even I drew a blank when I first saw Lost Highway. It wasn't so much that its labyrinthine plot ran away from me (which it did), or that I believed he strayed too far into the gangsterisms of modern manipulation (which he does), but rather that I found this particular mental mystery well, to be honest ... a little boring. It didn't grab me with any vigour and its midway rug-pulling distanced me even further. But that was years ago and, until watching it again for the purpose of reviewing this special edition re-release, I hadn't actually returned to it. So now, with a fresh determination to fathom Lynch's most unfathomable movie, I set out to travel down his Lost Highway once again. Destination, folks, definitely unknown.

The sinister exchange quoted above is a good a way into the world of Lost Highway as any. Jazz saxophonist Fred Madison (a terrific Bill Pullman) is having marital problems. His failure to connect with his wife Renee (Patricia Arquette) seems to be the result of his suspicions that she may be playing away from home, and are fuelled by some disturbing, yet vague, dreams. Anonymous videotapes left on the doorstep reveal that someone is spying on them, even filming them in bed. A voice from an unseen visitor has informed him that “Dick Laurent is dead,” and now, at the party of one of Renee's friends, a frighteningly weird stranger, played by an electrifying Robert (Electra-Glide In Blue) Blake as you've never seen him before, has left him in a chillingly vulnerable position by seemingly being in two places at once. Paradoxes and mysteries abound - who is Dick Laurent? And is he really dead? - but they are just chicken-feed compared the next videotape that arrives, showing Fred wallowing in the gore from his wife's dismembered body. To say more would be doing a huge disservice to those unacquainted with the film because, although even the likes of a full synopsis would scarcely scratch the surface of this leisurely cruise through the damaging dementia of a jealous mind, knowing too much would ruin the ominous mood that Lynch has set up, preparing the unwary for the huge turnaround at the halfway point of the journey.

“I'm sorry about that, Pete. But tailgating is one thing I can't tolerate.”

The first half of the movie is extremely impressive. Lynch maintains an aura of the oppressive and the downright creepy, the worming sense of slow-seeping dread literally keeping the eyes glued to the screen and the breath permanently caught at the back of the throat. His exquisite sound design has background rumbling gradually building up and up, becoming an unnerving undercurrent of seething, pent-up emotion. Awkward police interviews couple suspicion with almost nonchalant guilt-tripping from Fred, long lingering stares offer a million mysteries and the delicious prowling camerawork keeps the setting alive with sly threat and constant enigma. Even a crowded house-party or a jazz club have an alien ambivalence that conspire beautifully to unsettle. The interminable reek of protracted tension in the first forty-five minutes is much better than in any dozen recent horror films put together (Alexandre Aja's new Hills Have Eyes remake excepted) and Lynch's deliriously dark and macabre neo-noir nightmare rolls unstoppably down its own lost highway of warped perception, fear and doubt. That all is not as it seems is a given, but the narrative switch-a-round that occurs later runs the risk of losing the viewer altogether. Watching it now, all these years later, my old problems with this element still exist. Don't get me wrong, though. I'm thoroughly able to engage with the full story now and I love the movie's mischief, but I can't help feeling that the fascinating mood of the first act should have been allowed to continue. As it stands, Lost Highway is a film of two considerable parts that, in my opinion anyway, don't gel as perfectly as they should.

Lynch's cast, as always, are beyond criticism, as is his handling of them. The always likeable Bill Pullman brings little of his easygoing style to the picture, having expertly spun such breeziness on its head to produce a Fred Madison that is deeply lost within the fiendish deceptions of his own mind. There's an edge to his performance that provides him with a certain intensity of character, and it is something that he plays with obvious relish. And he does a “damn fine” job, as well. Arquette is exceptional too, in the dual role of Renee and femme fatale Alice in the perplexing second half of the film. In fact, the split narrative concept actually enables the leads to dominate the two rival portions of the story. Arguably, Arquette even gives the better performance of the two stars in the guise of gangster's moll Alice, milking pain and desire with consummate precision. Balthazar Getty is equally effective as Pete Dayton, the mechanic who occasionally works for Robert Loggia's wise guy, Mr. Eddy, although I just cannot reconcile his saga with Fred Madison's despite its mesmerising connection, leaving his act slightly unsatisfying - which is a great shame that I'll just have to learn to live with. Loggia is his usual dependable self, no more, no less - and that is a reliable rock for any film to cling to. But Robert Blake makes a hugely affecting Mystery Man. His bizarre look - whitewashed face, manic ventriloquist's dummy eyes beneath no brows and that misplaced Mallen streak (who recalls that, then?) - create another serious Lynchian oddball from Another Place. Lynch has always had a gift for coaxing the best out of an ensemble cast. He is marvellous at portraying multiple and varied characters without cramping individual styles, resorting to stereotype or sidelining. Which, of course, is probably why he can get such wonderful personalities to decorate his waking-nightmare imaginings in the first place.

“I like to remember things my own way. How I remember them, not necessarily the way they happened.”

Lost Highway's power doesn't just come from its accomplished cast, though. The score by Lynch regular Angelo (Twin Peaks) Badalamenti is a delight - a hypnotic cocktail of disquieting tonal aggression, suppressed industrial droning (another frequent Lynch motif) and tragically ominous theme progressions that throb inside your subconscious long after the end credits have rolled. But Lynch has always had an eclectic taste in the music he selects for his films, thus we also get Trent Rezner, Marilyn Manson (who also appears in some shock footage), This Mortal Coil, Rammstein and even David Bowie (Fire Walk With Me's Agent Jeffries) punctuating the soundtrack.

The question as to what it all means is the cultural error that critics and viewers new to Lynch are forced into making. On the one hand, the story depicts the disintegration of one man's mind via the insane corruption of violent jealousy. On another - and this is the more perversely satisfying for me, at least - it has no more meaning than just a fitful dream, a drink and drug-fuelled mental fusion of desire, guilt, rage and violence. Sex is a huge ingredient in the potent mix, of course, but under Lynch's cold gaze it is barely arousing. In fact, it is often a frightful prelude to something far less savoury. Then again, having Marilyn Manson's hideous visage crop up during the fun and games could also be to blame for the lack of titillation.

Fred Madison's plight doesn't have to be all that confusing if you just let the imagery wash over you. As I've already said, my problems with the role-shift still remain - and they aren't necessarily anyone else's problems at all - as I still adore that air of mystery and portentous threat that suffuses the first half so much more than the noirish gangster ode of Pete's predicament. The latter half, whilst still enormously enjoyable in its own right, just doesn't hold the same level of menace and seems to have been spliced in from a different movie altogether. Though, essentially and crucially, this is intentional. As a whole, I feel the film loses momentum, despite all the incident that Lynch packs into the second act. The random brutality that bludgeons it way into Getty's grab-bag plot doesn't have the impact that the prior build-up demanded, and death by coffee-table is such an un-cool way to go. The tricksy narrative whispers sweet nothings to convention - Pete's little affair with mob-moll Alice and the double-crossing and murder that follows - but also very deliberately spits venom in its ear when identities intermingle and the Mystery Man reappears with a devilish grin.

Everything is in place for the usual/unusual Lynchian wonderworld, yet I still feel that the film's painstakingly crafted disjointedness is a detriment rather than a cause for celebration. Constructed from paranoia and lent impetus by an emotionally pain-wracked velocity, Lost Highway's psycho-drama is a fabulously rich, though decidedly acquired taste. For fans, however, this release is absolutely essential.