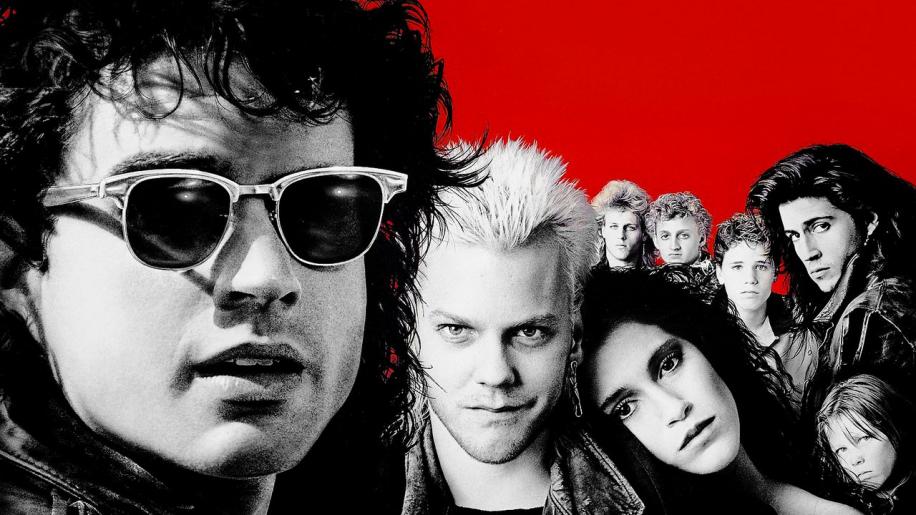 The transfer has been digitally remasterd and there isn't much wrong with the movie's picture. There is some noise and the more colourful lighting “halos” beyond where is should, such as the light shining on the animal skulls in grandpa's taxidermy room, but not enough to put you off. As a vampire movie, there is a tactical use of shadow and, although there isn't much detail in that deep shadow, the contrasts of the picture remain very good. The Chinese meal scene in the underground hotel is a good example of this.

As is normal with Warner releases, there is no DTS track. This isn't bad news if the alternate DD track is good but, in the case of Lost Boys, it is not. There is a tinny flare about the sound, like the movie was being played through a portable TV rather than a full AV rig. Sub action is near nonexistent, and the rear speakers are used, but not brilliantly. Dialogue does remain clear, I suppose, but this is not enough to make me like the soundtrack.

Joel Schumacher's Commentary is not bad. He goes into some detail describing the techniques he used in lieu of a large budget as apparently the budget was cut as Schumacher used unknown actors. Schumacher's dialogue is free flowing and never descends (much) into the self congratulatory hyperbole you often get in commentaries.

The Lost Boys: A Retrospective is a mix of footage and present day interviews with the entire major cast (minus Jason Patric and Dianne Wiest) and crew. Fairly run of the mill in its construction, Retrospective nevertheless has very interesting content, especially from Edward Herrmann, Sutherland and Schumacher.

Vamping Out: The Undead Creations of Greg Cannom is very informative. Cannom retells how, in just two weeks, he was asked to provide makeup and designs for the vampires, by himself. He offers technical detail about how to properly design a look that allows an actor to remain versatile. There is also insight into the amount of work that was cut out from the movie, too, including a particularly uncomfortable looking open eye full face casting.

The deleted scenes are not that bad, some of them you wish were in the movie. A World of Vampires interactive map is satisfyingly interesting with stories from around the world on the inception of the vampire myth. The Czech portion is especially repugnant. There is a promising sounding Lost Boys the Sequel? featurette that doesn't offer much, unfortunately.

In The Return of Sam and the Frog Brothers, Corey Feldman provides some laugh out loud moments as he recollects Haim stealing his long time friend and prospective girlfriend from under his nose. The editor cuts from Feldman's friendly vitriol to Haims blithe observations not realising any past upheaval he may have caused.

It is Feldman and Newlander's commentaries of select scenes that are the best on the disc, though. You can see in the top half of your TV the commentator watching the movie which is itself reproduced in the bottom half of your TV. Both seem to have a good time, Feldman in particular not taking anything seriously at all. This is all aided by the angle button, which you can use to swap between any of the commentaries. In contrast Haim's commentary is dry as sticks and not too interesting.

As I said, at the time this was seen as a mould breaking movie that helped re-invigorate the vampire genre. In actuality there were others, like my fave Fright Night and esoteric stuff like Geung si sin sang (aka Mr Vampire) which needs to be seen to be believed. However, Lost Boys reached an audience that others could not match, and still has a following today. Lost Boys SE makes for a superb disc, and any horror fan should have it, just don't expect the movie to be as impressive as you remembered it being.