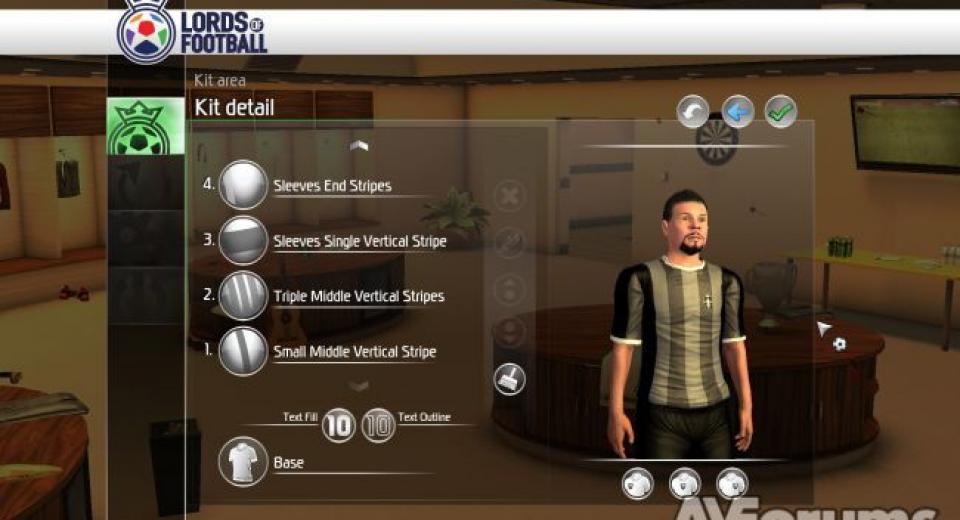 I had high hopes for Lords of Football. Geniaware’s elevator pitch is rich with potential: a football management simulator with lifestyle elements straight out of The Sims. It’s an original idea in a genre all but devoid of innovation; there’s no doubt Football Manager, FIFA and Pro Evo are top quality games, but changes at the AAA end of the spectrum are incremental. There’s space for something fresh.

LoF features old school Konami-style fictionalised versions of real clubs, such as “London Gunners” and the “Dortmund Bees”. Teams, kits and players are fully customisable but the game is wholly unlicenced in order to protect the good names of our morally upstanding sports stars.

In practice, LoF is a game of two halves: the Sims-esque city phase, and the match phase. The city phase in split into the day and the evening, but it all amounts to the same thing: players are dragged and dropped onto the various buildings and facilities in order to increase or decrease various stats.
A handy filter at the top left of the screen is used to quickly select groups of players based on attributes of your choosing. So for instance you may wish to see the training each player needs the most, and assign them to that activity. In fact, that will be almost all you will do during the day.
If a player isn’t strong enough a bicep will be displayed above his head and you'll pop him in the gym; those with a heart symbol should be taken to the running track; a player with a 'heading' symbol could be dropped onto the training pitch to work on their aerial ability. And so on.
At the end of the day, players get changed and head out for a night on the town. This works in much the same way as training. Players have ‘needs’ like alcohol and sex. Drop them at a bar or club and their happiness will increase, but too much of a good thing leads to addiction. The balance between keeping your hormonal employees happy and on the rails is the focus of the evening activities.
When the night ends, the game moves into the match phase. Games are played out on a slightly janky game engine in a similar way to Football Manager, but with some added interactivity. At any point you can take some limited control over the players such as directing them to make runs, passes or take shots.
It’s a sound idea but the match engine frequently misbehaves. Nonsensical AI movement is all too common, and on two occasions I experienced game-breaking freezes. The bugs undermine the interactive element of the matches because you can never quite be sure if you’re elaborate run-and-through-ball plans will ever come to fruition. LoF fails to balance pacing and content. The city phase takes just under a quarter of an hour to work through, although it can be fast forwarded to some extent. Typically though, you’ll find yourself assigning players to training / nightime activities once, then leaving them for the session. And fifteen minutes is a long time to watch players go through the same animations over and over again. Facilities can be upgraded by completing various objectives but the reward doesn’t justify the effort. I never found myself thinking, “Ooh, now my gym’s been extended I have to play another match.”
Geniaware’s vision of giving players unique personalities simply hasn’t been realised. There’s supposed to be a link between training, personal issues and matchday performance but it’s obscured because of the unthinking way the game encourages the player to interact with his/her footballers: Your relationship with the squad is never escalated beyond simple stat management. You’re almost always training individuals in their weakest area or treating their most chronic addiction, rather than ever seeing players as a rounded whole.
So when my star striker was found staggering round town drunk when he was supposed to be in training, he should have required a little more than simply being dragged off to a therapist for the day. In fact, he was joined by three others from the first team but I couldn’t tell you who they were now. I just swept up everyone with a booze problem and dropped them in with the counsellor. It hardly encourages player/character bonding. The match phase is similarly afflicted by issues of pacing and content. You can skip the match altogether if you wish, but there’s no option to watch the game at anything other than one default speed. From start to finish with no interaction, that’ll take you about ten minutes. So coupled with the city phase, it takes up to half an hour to see a cycle through and during that time far too little happens. There’s simply not enough going on to fill the time, and not enough changing to make one cycle different from the last.
What you see in your first three matches - the first hour and a half - is more or less the totality of what you’ll see during a far longer play through. It’s a shame because that first city phase / match phase cycle is full of promise. The tutorial is well delivered and LoF feels as if it’s shaping up to be a game rich with possibilities. Unfortunately, a limited range of activities combined with a sub-par match engine result in an ultimately dull experience - and for nearly £25 it's just not worth it.

Lords of Football could have been a lot more than it is. The idea of fleshing out the footballers by integrating Sims-like elements into the Football Manager formula has a lot of potential, but unfortunately there isn't enough for the player to do to keep it interesting for more than a couple of hours. The £24.99 price tag simply can't be justified.