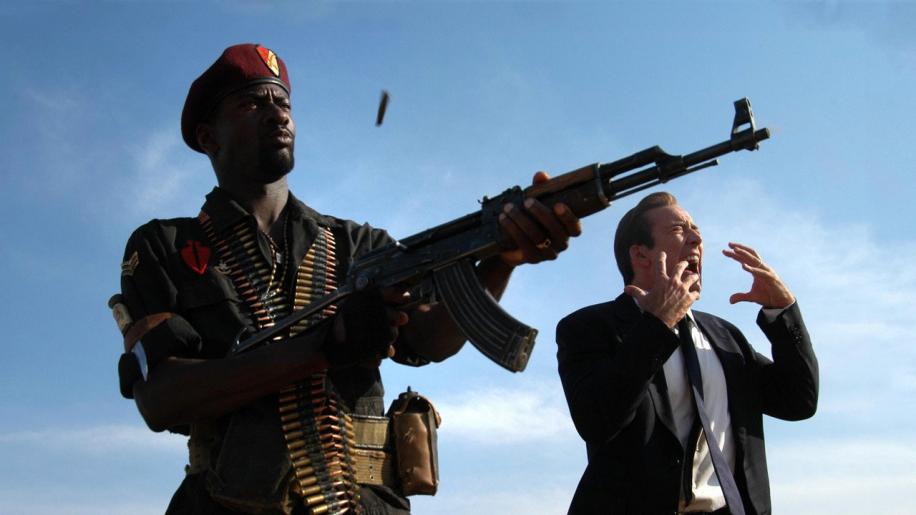 Lord of War is presented in a glorious 1.78:1 aspect ratio anamorphically enhanced widescreen transfer. The detail is fantastic throughout, with solid clarity, no softness and very little noticeable edge enhancement. There is negligible grain in the movie, only vaguely apparent in the darker lit scenes. The colour scheme is glorious, showcasing the various different decades and countries in all their beauty and blacks are solid throughout, which is particularly good since that's all Cage seems to dress in. The transfer itself exhibits no discernible print defects and is simply one of the best that I have come across recently. Lord of War gets similarly deluxe audio treatment with two, top-of-their-game audio tracks - one in Dolby Digital 5.1 Surround Ex and one in DTS-ES 6.1. The dialogue is clear and coherent throughout, with a huge array of recognisable and new tracks dotted across the runtime during the moments where silence or scoring is inappropriate. There are a few effects that give the surrounds some things to do - from explosions, to the pervasive gunshots - but the aforementioned soundtrack is probably the most dynamic aspect of the mixes. The DTS-ES track is clearly the winner, but comparatively the Dolby Ex track is pretty spectacular, certainly one of the best of its format. On the First disc the only extra is an Audio Commentary with the writer/director Andrew Niccol. He discusses the intricacies of the movie, from the opening shot to the standout scenes, the locations they filmed in and the dangers encountered across the production. He talks about the budget, the hard work that all of his crew went through, the performances he got out of his cast and the story itself. Much of his time is spent detailing the sets and how they put everything together, but the brief anecdotes about the various on-set happenings are infinitely more interesting. Overall it is quite a slow, drawn-out offering that is worth dipping in and out of.

The second disc houses all of the other extras. The Making-Of Documentary runs at twenty minutes in length and has the cast and crew talking about the ideas behind the movie, the story, the characters and how they made it all come to life. They discuss the budget, the difficulty they had securing so many weapons (like the fifty T-72 tanks they had to get for one shot) and the different locations they filmed in. We get plenty of behind the scenes footage of scenes being filmed and actors preparing for the role, along with concept art and stills from the production. Cage himself talks about the character he got to play here and how he was unsure about whether to take on the role and the director talks about how he got to know several arms dealers (who helped a great deal on the production) and actually liked them.

Making a Killing: Inside the International Arms Trade is a fifteen minute look at arms smuggling in real life, with intelligence experts and UN spokespeople talking about the sheer volume of arms around the world and the way in which they are used or dealt with. This is a sobering list of statistics on weapons and their distribution and it brings up some truly interesting points about the United States' own arms production (for those who did not already know) and the devastation that some of these weapons cause across the world.

Weapons of the Trade is split into eight different weapon types - the AK-47, FAMAS and M-16 assault rifles, the MP5 and UZI machine pistols, the M240 machine gun, the Glock19 handgun and the RPG-7 rocket launcher. Each one of these is clinically displayed (as if you were looking up the designs on a computer), with a brief text history of the weapon and then a list of statistics about its calibre and rate of fire etc. If you like your guns, this is a good place to visit.

There are seven Deleted Scenes, each of them about a minute in length. We get more of Ava and Yuri, more of Yuri with his dad, with his uncle and with his brother. None of it really adds a great deal that was not already clear from the movie as is, but it is still nice having them here to watch (although a bit of director's commentary or the option to play all would have been nice).

There is a Photo Gallery with over sixty stills from the production, including promotional shots and behind the scenes samples. Finally we get eleven minutes' of trailers, including the comedy Waiting (which actually looks mildly amusing), the documentary The Grizzly Man, about this guy who spent a great deal of time hanging around with bears, the new animated movie from the great graphic novels, The Ultimates (featuring a whole bunch of superheroes), the Aristocrats, the period drama A Good Woman and the comedy-drama In the Mix. Lord of War is a disturbingly cynical portrait of arms smuggling, almost a DIY book for future generations of arms dealers across the world and, as such, it cannot help but leave a bitter taste in your mouth about the sheer lack of morality displayed within the movie. Still, as DVD packages go, this one has superb specs and a decent set of extras that will keep fans entertained for quite some time. If you like Nicolas Cage, or like guns, this is still worth a watch but don't expect to come out of this movie feeling very good about the world around you.