Looper is one of the most underrated movies of 2012. 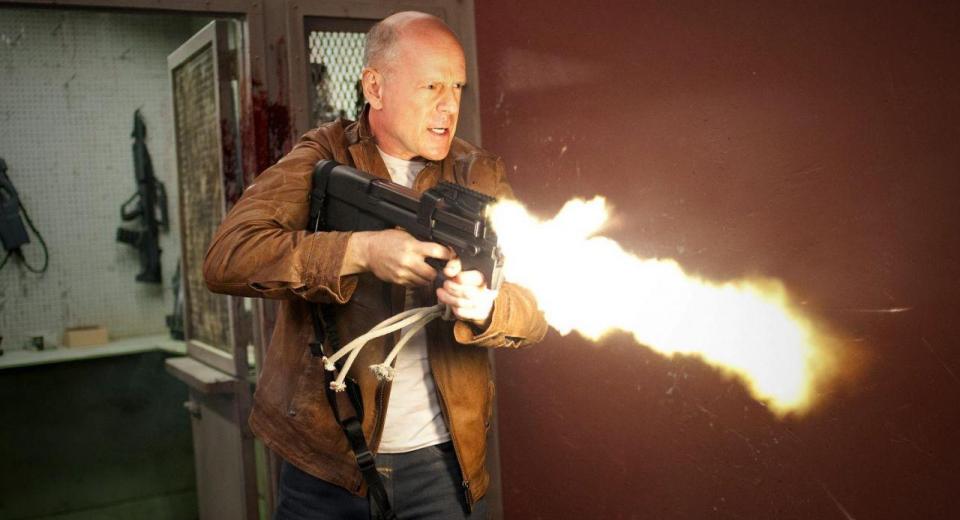 Looper hits UK shores with a Region B locked release that boasts a stunning 1080p/AVC High Definition video presentation in the movie’s original theatrical aspect ratio of 2.35:1 widescreen. Sony are generally very reliable when it comes to smashing transfers and this is no exception, the reference quality presentation making for largely flawless demo material. Detail is generally excellent throughout, allowing for excellent skin textures, clothing weaves, fine object detail and background observation, all without any signs of digital defects: no edge enhancement, no unwieldy DNR, no banding, no blocking and no noticeable crush.

The colour scheme is rich and broad, despite the minimalist, often fairly dour stylisation. Indeed the strongest colours come from the natural sources: the vibrant green countryside with rich brown wood tones juxtaposing the dilapidated cityscape greys which only boasts bursts of neon, as well as some more obvious metallic tones, to punctuate the sombre visuals. The entire palette is rendered accurately, from the healthy skin tones to the deep blood reds. Brilliant, vivid lens flares further spark up the visuals, although they do bring with them a slight hint of unintentional noise. Largely strong blacks do dip occasionally to a paler-than-you-would expect level but generally they still afford excellent shadow detail and impressive night time sequences.

Overall this is a stunning video presentation that is just a smidge below that required to attain a perfect-10. Impressive. As for the aural accompaniment, Looper boasts an unquestionably perfect DTS-HD Master Audio 5.1 track which actually is flawless, both in precision and potency. Dialogue comes across clearly and coherently throughout, eagerly presented across the frontal array and taking precedence – wherever appropriate – over the rest of the elements incorporated into the track. Effects are myriad, used both subtly – to craft a convincing background atmosphere for each specific locale – and more prominently – to levy a volley of shot in your direction, and rendered accurately throughout. The film manages to balance the natural sounds of the rural in-the-middle-of-nowhere farm, with its rustling fields and creaking wooden boards, with the more claustrophobic noises attributed to the urban locales, with their buzzing vehicles and sweltering, dirty streets. The score similarly perfectly matches the respective environments, clinically cranking up the tension in an almost imperceptible fashion, before delivering a more rousing, thunderous accompaniment to the key sequences. The LFE channel gets a fair amount of work, mainly through the louder weaponry – gunshots from the blunderbusses and the revolvers are easily distinguishable! – and thus the more noisy scenes in particular get that added oomph. Overall this is an exceptional track which easily ranks as demo material through and through. A Commentary track featuring the Writer/Director and two out of the three lead cast members, over half an hour of Deleted Scenes and over half an hour of behind-the-scenes Featurettes – Looper hits Blu-ray with an ample selection of interesting extras that is sure to satisfy any fan.

Writer/Director Rian Johnson teams up with both Joseph Gordon-Levitt and Emily Blunt to provide an excellent accompanying track which keenly balances entertainment value in the form of witty anecdotes and entertaining reflections, with informative technical content that dips into the story, pre-production work, character design, set design, film shoot, locations and post-production work. Well worth checking out.

Almost 37 minutes of Deleted Scenes are on offer here, all with optional Commentary by Writer/Director Rian Johnson and Actor Noah Segan (who plays Kid Blue in the film) explaining why they were not left in. It’s a total of 22 scenes, some of which are alternate versions, some of which are extended cuts and some of which are completely new. There’s more Kid Blue – as you might have guessed from having him participate on the Commentary – as well as more club sequences; more from Joe and his stripper girlfriend; more from Old Joe, including an extended version of the diner conversation with more detail into the whole time-travel thing; more scenes at the farm (including a great little extended bit whilst searching for Joe); and a nice little sequence with unfinished effects which further develops Old Joe’s history before he came back. It’s a shame the effects weren’t finished for some of these scenes because they’re pretty good, and this whole selection is well worth working through.

The Future from the Beginning runs at a little under 8 minutes and provides interview snippets from the cast and crew who primarily discuss the cast and characters, with specific focus on the split-performance of the same character between Willis and Gordon-Levitt and both the finer mannerisms the latter adopted to play the former and the physical prosthetics applied.

The Science of Time Travel runs over 8 minutes in length and takes a historical look at time travel concepts across the ages, with some attempt at providing insight into both the science behind it and the rules that need to be applied to make it work.

Scoring Looper is a slightly more meaty 16 minute look at composer Nathan Johnson’s work on the score, although it is admittedly split into three smaller bittier offerings: Field Recordings, Percussion and Melodic Instruments. Whilst you would expect this to be a fairly formulaic look behind the score, the actual methods Johnson used to craft the score are pretty unique and well worth exploring.

Finally we get a Looper Animated Trailer which is a very interesting alternative Trailer that utilised painted semi-animated key moments from the film, with no dialogue, set to the original score. Definitely worth ninety seconds of your life. Superbly acted, impressively directed and extremely well written, Looper was one of the most underrated movies of 2012. It’s got a fantastic cast; a well thought-out plot which twists and turns through a largely coherent time-travel scenario; dialogue injected with some refreshing wit; and heavy performances from all the least expected directions. It provides two hours of thrills and a bucket-load of surprises, as well as a few excellent action beats. And it doesn’t end there. Let this movie sink in and penetrate to the dark recesses of your mind and it might blow it wide open. This is a movie that demands attention, requires feedback, and warrants discussion. It’s a great movie that will make you think, even if you don’t realise it at first.

On Region B locked UK Blu-ray we get excellent video and audio presentations as well as an impressive set of extras, all of which make this a clear must-have purchase for fans and a fairly easy, sure-bet blind-buy for most everybody else. Highly recommended.