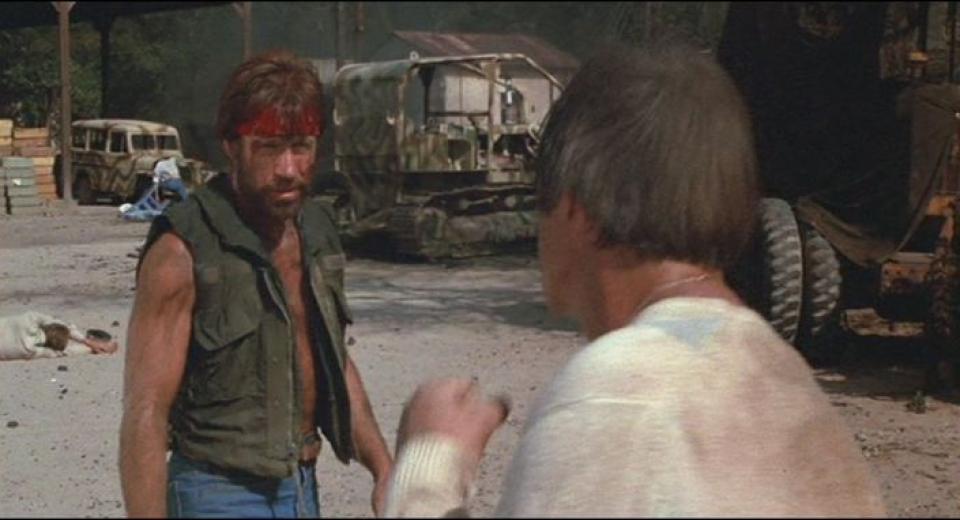 The only thing that can creep up on Chuck Norris, is Chuck Norris’ shadow. But it has since learned the hard way that it is better to keep its distance. FACT.

MGM do McQuade proud with a very satisfying transfer of this 1983 movie. Bright, colourful, pretty clean and textured and boasting some terrifically detailed elements, this is a winner.

Presented 1.85:1 and via AVC, this is a rugged film that benefits from a consistent level of contrast that draws distinction from the frequently high-glitzed sunny aspects of the Texan environment and the cooler, more subdued interiors and night-time sequences. Faces do not warp with white-outs in the intense glare, although there can be some occasions when edges seem to fuzz in the shimmering photography from Roger Shearman (BreakheartPass), but this is inherent to the source.

When the film first starts, you may well groan and think that this is going to be a shambles. When the enigmatic opening titles of a wolf on the prowl flicker past, the credits are shaky and when the film actually opens-up upon a view of the dusty desert and the arroyos it is soft, grimy and indistinct with fuzzy edges and haloes galore. AND THEN, we cut to a close-up of McQuade’s face and the detail and clarity becomes quite impressive. In a way, this sets the tone for much of what follows. There are many, many moments when this transfer shines. Great texture – properly film-like, with nicely resolved grain – and lots of surprising detail, and not just in close-ups, but found in deeper shots of the El Paso streets, Rawley’s kung-fu presentation, Falcon’s videogame nest, the bric-a-brac of the Ranger’s cabin and some views out across the desert. But then again, there are scenes, and even shots in which the image becomes murkier and the definition drops off and the picture becomes altogether flatter and rougher-looking.

The thing is, of course … this is precisely how it should look. Obviously lensed with differing film-stock, Lone Wolf McQuade has a variable visual quality on Blu-ray that I would say was totally authentic to the source and also, quite happily, sharp, crisp and detailed for far more of the running time than it is soft and ill-defined.

Another rewarding element is the lack of damage to the print, which looks consistently strong and robust. You will also be pleased to hear that MGM has not tinkered with it by adding any digital unpleasantries like DNR, edge enhancement or aliasing. And there’s no evidence of banding either.

This is quite a colourful movie, despite the often arid setting. There are some quite dominant primaries on offer – the reds in particular. These really punctuate the visuals at times, especially the bandana around McQuade’s head, the shoulder tabs on the cops, the neon lights and police-cruiser lamps and, massively, the red robe that Rawley Wilkes wears during his show-bout. In fact, this last example is so intense that it seems to fuzz out a little bit, although I would not say that this was an error of the encode. I do not think that primaries have been boosted in any way during the transfer but, man, that they can’t half be picked-out from the image and emblazoned. Explosions are thick and orange and marvellously vivid. Skin-tones are rugged, leathery and well-cooked. They convince. The bright sunny aspect is well maintained with a contrast level that keeps things smooth and free from untoward manipulation. There are some occasional and slight fluctuations going on, but this is the condition of the print. Faces don’t bloom with any highlights, and the darker pockets of visual information in the frame are strictly presented with the appropriate depth and stability. I didn’t have any trouble with black crush, although some of the more intense night-time scenes (and let’s face it, it is very dark in the desert at night) are quite deep and choking.

You want detail? Well, let’s put it this way, I look at things like hair separation to glean the clarity and distinction of finite visual rendering. With a Chuck Norris movie, there is ample evidence to be checked in this department. Sweat glistening amongst the facial rug? Check. Nose and ear-hairs standing proud? Check. Burnished bush-fire yawning across the shoulders? Check. Errant nipple antennae? Naturally. But this is a new one on me, folks. I have never, ever seen knuckle-sproutage like this before. Not even the Wolfman or King Kong are as hairy as this. WOW. Well, if you want a test of sharpness, then look no further than Chuck’s monkey-paws. Dear lord, this guy is beyond human – almost the Missing Link. Now, lest you think that I only have eyes for the Chuckster, there are also a couple of other delights that are on offer with the clarity of this transfer. Barbara Carrera’s flimsy blouse also yields a couple of details lurking beneath that are, thankfully, not as hairy as Chuck’s! And those with eagle eyes might want to analyse a sequence when she offers assistance to the semi-rescued Sally towards the end a little more closely.

Overall, I would say that this is a very good transfer that keeps all the grit, sweat and dust of the original source, but manages to deliver a strong and often very vibrant and highly detailed image. I like how MGM have treated these vintage Chucksters. As with MGM’s release of Code of Silence, this only gets a DTS HD MA mono track, but this can also be a cause for celebration. We have no bugaboo bogus surround issues to contend with, and no stretched signals to dab around the otherwise redundant channels. Dialogue is clean and clear with his hiss or distortion to muck the quiet threats and tongue-twisting Texan twang.

The restrictions of the single-channel don’t pose any problems to the action set-pieces, which still manage to pack a punch. There are a variety of weapons blasting their way through the movie, and it is pleasing to note that each gets its own distinctive effect. We get the guttural belch of McQuade’s sawn-off shotgun, the solid torpedo-like clout of his high-velocity rifle hurling armour-piercing rounds into the horse rustlers’ trucks, and that classic Dirty Harry Magnum sound for his side-arm. Uzi’s spit molten lead with a fierce gusto, as well. Whilst the battles themselves can sound a touch lacklustre, even with grenades going off, M16’s chattering, and crossbow-bolts thwapping through the air and lots of goons getting scattered by explosions, when McQuade indulges in some target practice, each and every impact of his marksmanship is barking deep and capped-off with detail as the various, terrified-looking dummies erupt under the Ranger’s furious fusillade. The throaty roar of his turbo-charger also comes across well, as do the whup-whupping of helicopter rotors and the bumping of vehicles over rough terrain.

That Spaghetti/Bondian score from De Masi has a fine placement within the mix. The grand operatics of the choral passages and the gothic thrumming of the organ have, respectively, an angelic cleanliness and the iconic depth of man vs destiny. The Western trademarks of Franco De Gemini’s harmonica and the whistling from Alessandro Alessandroni also possess clarity and resonance, although there is no getting away from the fact that all of this does sound, at times, a little bit tinny and restrained. Personally, I think this is a tremendous score – a real oddball curio that is customary for De Masi, who would also supply lots of music for the popular Peplum (sword ‘n’ sandal) movies as well as Westerns and thrillers – and it is great to find that it has been allowed plenty of room to breathe despite the limitations of the track.

Finally, there weren’t any age-related problems that I encountered such as hiss, crackle or drop-out.

This is a fine and solid lossless mix that delivers the bangs and the knocks with aplomb, and the delirious score with sweltering enthusiasm. Just the film’s trailer is all. And it is one of those super-long ones that tells the entire story in chronological order. A census taker once came to Chuck Norris’ house, but when he saw who lived there he quickly went and bought a nice Chianti and ran back to join his colleague round at Hannibal Lecter’s place. FACT.

A bonafide classic in the Chuckter’s ammo-belt, Lone Wolf McQuade is also a damn fine piece of action entertainment that mixes the myths of the Old West with the attitudes of post-Vietnam and the hard-ass mystique of the martial arts. Our boy is a hero out-of-time, a throwback to a wilder era. Chuck cuts a sweaty, rugged dash through the parched landscape, buffeted by a swirling, operatic Spaghetti Western score and going to nose to nose with a surly, arrogant and rattle-snake mean David Carradine.

It’s big. It’s over-the-top. It’s daft as hell … but it’s a classic in the Norris canon, and you can’t call yourself a fan if you haven’t got it in your collection. This is a film that genuinely sweats off the screen, and you may find yourself getting the brush and pan out to sweep up the dust and grit from the rug afterwards. Carrera is as sexy as ever, and the presence of L. Q. Jones provides colourful support. The action is plentiful and varied, and there is never a dull moment. It is comic-book stuff and thunderous entertainment.

Sadly, MGM’s disc carries only a trailer, but the transfer is a good one that looks film-like and authentic, and has many moments that really shine. The audio is unmolested and faithful to the source, and it also has some strong plus points.

A sleeveless combat jacket? A red bandanna? A tin star? A boot that’s just knocked your face back to last Christmas?