The end result is awesomely impressive 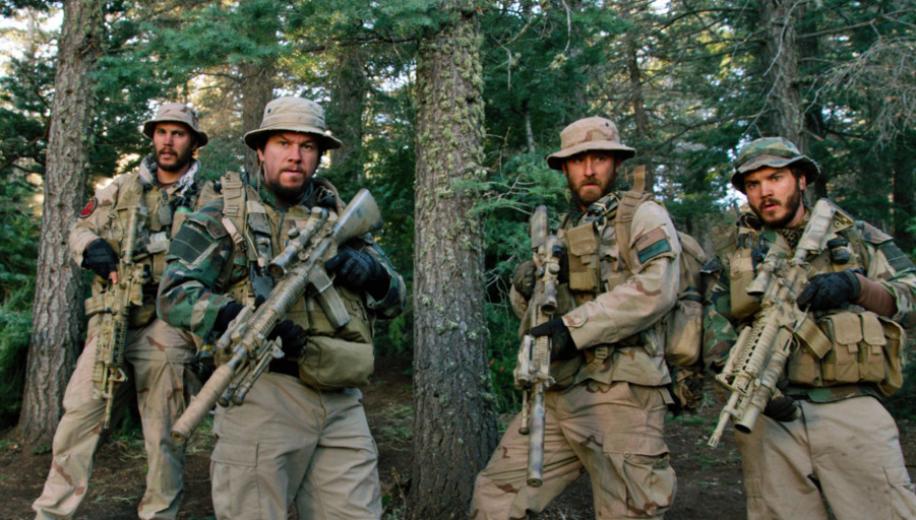 You can die for your country, I'm gonna live for mine.

Marcus Luttrell cathartically exorcised his demons in his autobiographical story of the doomed Operation Redwings, in which he, and three of his Navy SEAL best friends, were dropped behind enemy lines in Afghanistan and fell foul of some goat herders. They spent days in an all-out firefight against a veritable army of Taliban on sheer mountainous terrain in which there was only the one Lone Survivor. The film tells quite the story of against all odds survival, but at great cost and director Peter Berg’s depiction of these events is very much a condensed version, and follows a very simple structure, while hitting all the right emotional notes. It is also a visceral, hard hitting and genuine look at the determination of some of the most highly trained soldiers on the planet, which makes for a thoroughly engaging and entertaining film.
The dedication of the filmmakers to capture the essence of the real soldiers in their actors and the SEAL training undergone by the principle cast means that they not only look the part, but become the part – moving, aiming, talking, walking and feeling that part. Mark Wahlberg, as Luttrell, along with his team-mates Axe (Ben Foster) and Danny (Emile Hirsch), and their team-leader Mike Murphy (Taylor Kitsch) all put in stellar performances with Wahlberg and Forster really pulling it out of the bag with their war torn bodies on the mountain side discussing their fates. The action set pieces are incredibly good, the mountain escape becoming wince inducingly painful to watch, while the attention to detail is paramount. Whatever your feelings towards the patriotic stance given to the one-sided story, the end result is awesomely impressive. Lone Survivor was filmed digitally using the Red Epic camera at a resolution of 5K and was finished using a 2K Digital Intermediate (DI), which presumably formed the basis for this Ultra HD Blu-ray release. The film was upscaled to 3840 x 2160p and presented as widescreen 2.39:1 aspect ratio. The disc uses 10-bit video depth, a Wider Colour Gamut (WCG) and High Dynamic Range (HDR), and is encoded using the HEVC (H.265) codec. We reviewed the Region free US Ultra HD Blu-ray release of Lone Survivor on a Panasonic 65DX902B Ultra HD 4K TV with a Samsung UBD-K8500 Ultra HD Blu-ray player.

The Full HD Blu-ray release of Lone Survivor (included with this release) is already a reference disc in terms of its picture quality, and this Ultra HD disc is even better; you would swear it was always meant to be released this way. Detail is phenomenal right down to the finite edges: skin texture (pores, facial hair, sweat, grime) is perfect, clothing weave is perfect, including stitching on the patches and the exposed threads in ripped uniforms, as well as the sun gleaming off weapons and other equipment. However, where the picture really comes into its own is with the many landscape establishing shots – tree lines, mountainous terrain and distant camps/towns – are breath-taking in terms of clarity. The Blu-ray has all the same information but it is softer in its presentation and this is noticeable at normal viewing distances.

The wider colour gamut and high dynamic range really are a huge step up from the Blu-ray and bring the Ultra HD disc beyond anything HD can perform. Berg’s penchant for pointing the camera at the sun realises some spectacular images that are almost blinding – just as it would be if you looked at the sun – but more than that the colours are so much richer, indeed there is so much more colour in sun sets, or distant skies, compared to the Blu-ray which is more of a uniform hue. Explosions look suitably hot without looking cartoonish and blood is a sickly deep red. All the primaries come off very well with the earth tones, of which there are many, being the best. This is helped with the mammoth black level that adds tremendous depth to the picture; there is plenty of available shadow detail with the other end of the scale offering blistering whites that never clip.

Digitally there are no compression issues, no edge enhancement, no jaggies or banding. The original digital source is absolutely pristine, with the whole image reference through and through and a good step up from the standard Blu-ray. Simon Crust reviews the audio on a standard 5.1 surround set up – If the picture had you wowed then the sound will leave you breathless! Totally uncompromising the sound design places you in the centre of a war zone at its most climactic, while being subtle enough, in the quieter moments, to be affecting. Dialogue is clear, precise, sounds very natural and given plenty of directionality when needed. The surrounds are used to fill out ambient sounds, such as nature or the hustle and bustle of an army communications hub, and are ready to burst into life once the action starts. And the effects are myriad: most obviously is the gunfire which ricochets around the room, but with that you also get spent shell casings ‘tinkling’ against rocks and echoes of gun fire reverberation around. Explosions are room engulfingly epic, the many RPGs detonating against rock faces or walls sound like they are coming through your own walls. These effects are helped by the tight, deep and resonating bass which adds thump and realism to the proceedings – helicopters a suitably heavy. The score is well layered into the mix and absolutely nothing is missed. And as good as the bombast is, the silence is even better; the moment before the team is discovered is simply awesome.

Steve Withers reviewed the DTS:X soundtrack on a 7.2.4-channel setup using a Denon AVR-X7200WA – Lone Survivor was originally released at the cinema with Dolby Digital, Datasat and SDDS soundtracks, so the DTS:X soundtrack included on the Ultra HD Blu-ray is obviously a new mix. And what a mix it is! From the opening scenes at Bagram air base you know that you're in for a sonic treat. Helicopters fly all round the sound field and especially overhead and at one point a Hercules transport plane flies right over you as well. Speaking as someone whose home lies on the flight path to RAF Lyneham, I know exactly what a Hercules flying directly overhead sounds like and this DTS:X soundtrack captures it perfectly. Once the men are on their mission the initial scenes capture the quiet sense of a largely empty mountainous landscape, with plenty of subtle audio cues. However once the protracted firefight starts, the entire mix steps up a gear and you are utterly immersed in the fog of war.

Bullets ricochet and tear through the 360 degree sound field, gunshots echo and heavy calibre weapons have a powerful low energy thud to them. There are also plenty of subtle foley effects within all the chaos, making for a truly superb sound design. The fall down the mountainside is brutal and the soundtrack simply makes the experience all the more visceral. The LFE channel gets a thorough work-out but the bass energy is always used to emphasise what is happening on the screen and never simply for the sake of it. Where the sound mix is especially strong is in terms of dynamic range, going from very quiet to very loud in a heartbeat. However, in amongst this cacophony of action the dialogue remains clear (except where comms are intentionally garbled) and focused at the centre and the sparse score is woven into the film very effectively. All-in-all this is one of the best soundtracks we have heard to date and really shows how much more an immersive audio mix can add, even when the original soundtrack was already reference. All extra features are housed on the standard Blu-ray included in the set and match those already available.

Will of the Warrior – A 30 minute making of which concentrates on Marcus Luttrell’s early life, desires, the awful situation that occurred and how he dealt with it in his book; the dedication of the film makers, particularly Peter Berg’s drive to make it as authentic as possible are also covered.
Bringing the Story to Light – Four minutes about script development with Berg and his attachment to it.
Recreating the Firefight – The logistics of shooting on locations and the immense bravado of the stunt teams in recreating the look and feel of the shootouts in this brief 10 minute feature.
Learning the Basics – Brief 6 minute look at the training the actors received under the tuition of Navy SEALs in preparation for the film.
The Fallen Heroes of Operation Redwings – A 15 minute emotional featurette with the families of some of those that died in the operation and how they were portrayed in the film.
The Pashtun Code of Life - Mohamad Gulab talks with Berg about his actions, the danger and his beliefs of why he acted as he did. Lone Survivor is director Peter Berg’s retelling of Marcus Luttrell’s autobiographical novel of the same name about the doomed Operation Redwings, the lives it cost and the circumstances that lead to the mission's failure. However you may feel about one man’s point of view on a particular incident and the following actions, it cannot be denied that Berg’s dedication and determination to bring to life the sheer bravado and will to survive of a small band of military men lost behind enemy lines is a tour-de-force of epic proportions. Yes it follows a basic narrative and hits all the clichéd notes, but in also never shies away from the truth of a situation, how things are rarely black and white, and the utter bone breaking, skull smashing, body shattering agony that the SEALs suffered is painfully realised. It also manages to be patriotic, empathetic and a hugely enjoyable ride.


This Ultra HD Blu-ray set from Universal is excellent

As an Ultra HD Blu-ray package, the set from Universal is excellent; the picture is magnificent, almost as if it was always meant to be released in this format, with absolute finite detailing, superb colouring with both the HDR and WCG contributing to bring the picture alive. The DTS:X soundtrack is equally as stunning, being subtle and energetic, with action effects placing you in the middle of the firefight, all the while remaining natural and realistic. The extras package (found on the standard Blu-ray which is also included) rounds off a set that is a good step up from Full HD.

You can buy Lone Survivor on Ultra HD Blu-ray here