Red, White and Blue House Down 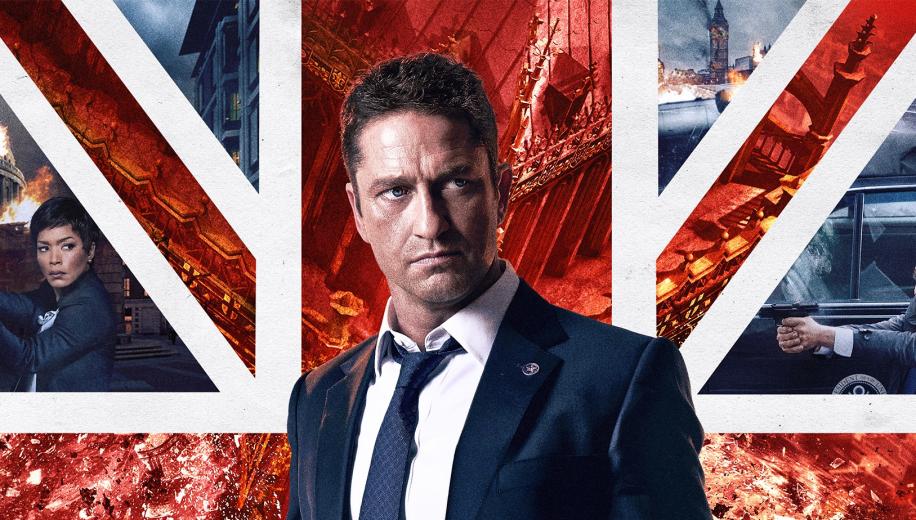 The sequel to Olympus Has Fallen fails to even deliver retro 80s-style one-man-army action in a modern world of shifting geo-political landscapes.

There was something brutally effective about Olympus, and a sequel was not only to be expected, it was to be welcomed. London seemed like a comparatively natural progression for the series, thematically, and the basic premise – an assassination plot involving visiting dignitaries on UK soil – is sound. All it needed was bad guys, Gerard Butler, plenty of ammo and some well-staged action set-pieces. Unfortunately it stalls on take-off, with a disappointing mis-use of currently topical drone strikes, and a plethora of indiscernibly bland villains (whose tragic backstory, in a more politically sound drama, would have left them the heroes) and illogical set-pieces. The absence of original director Antoine Fuqua is noticeable, with little known Swedish director Babak Najafi making an inauspicious US debut here. It’s largely forgettable, oftentimes unintentionally funny, and disappointing even for those who only wanted more of the same.
Indeed it feels, at times, as if it falls into the Taken 2 trap; over-complicated plotting and set-up, and then failing to deliver where it counts – on the action front. Najafi stages his mayhem in a messy, haphazard fashion further hampered by some really poor VFX. Even the cast of familiar faces that return here are almost universally wasted – Freeman looks like he’s on life support, whilst Melissa Leo and Robert Forster fight over who has the most lines. Angela Bassett deserves better, whilst Radha Mitchell and Aaron Eckhart phone it in, all detracting from what you really want – Butler cracking heads open and shooting people in the face. It’s something he did so well in the first film, but here it’s far less efficient, and even a little unpleasant (his repeated stabbings are less clinical and more serial killer this time around). He’s still the saving grace, but he does suffer – along with the rest of the movie – from a lack of decent opponents, and of decently-staged combat.

Olympus was far from a pretty movie, and London follows suit

The 1080p/AVC-encoded High Definition video presentation, framed in the movie's original theatrical aspect ratio of 2.40:1 widescreen, does a solid enough job with the material but is far from reference or demo worthy, frequently trading in the same murky wares as its predecessor. Detail remains fairly impressive, with some scenes shining more than others, but never a sense of pervasive clarity; the moody English weather does not help, with the image tweaked to give the UK a more stable climate, even if consistent bright blue skies were a sheer impossibility for this shoot. Shoddy effects moments stand out amidst the rest, whilst black levels falter under the strain. Overall though, this is far from an overtly objectionable video presentation, delivering London is much the same style as Olympus, and giving it that very same gritty feel that arguably suits the material even if it doesn't particularly lend itself towards demo excellence.

Cas Harlow reviewed the UK DTS-HD Master Audio soundtrack on a 5.1-channel setup – Despite doing a largely good job, it's tough to accept the simple 5.1-channel offering on the UK release of London Has Fallen when the US counterpart boasts a superior DTS:X alternative which could have easily been provided here. Nevertheless, it does a decent enough job, delivering clear and coherent audio, firmly prioritised across the frontal array, whilst effects are punchy and - when necessary - have suitable impact. Bullets whizz and slam home with LFE heft, whilst explosions shake your living room. The score is generic as hell, however, but does offer a little more material for the track to trade in. Despite the qualities of what we do get, it's hard to accept when there's a superior track waiting on an already-available release overseas – 8/10.


A strong DTS-HD MA 5.1 offering doesn't make up for the superior DTS:X soundtrack in the US

Steve Withers reviewed the US DTS:X soundtrack on a 7.2.4-channel setup – It's a real shame that the UK release of London Has Fallen is missing the DTS:X soundtrack that adorns the US release because, quite frankly, it's the best thing about the film. The nature of the plot obviously lends itself to an exciting immersive audio mix and that's exactly what we get, with one of the most active and aggressive soundtracks that we've heard in a while. During the numerous gun battles the sound field opens up in a cacophony of ballistic violence, with gunfire, ricochets and bullets zipping all around the room. A gun fight up a street is a particular stand-out sequence and a later action scene inside a building makes effective use of the overhead channels, with muffled gunfire and explosions coming from above. An attack on a group of helicopters using surface-to-air missiles is also extremely well handled, whilst the wider soundstage and layering that the multiple channels allow, really opens up the chaos on the London streets. Despite this cacophony of violence, the dialogue always remains clear and the score is mixed effectively across the front channels. The low frequency effects are absolutely thunderous, with plenty of bass energy to accompany the destruction of various London landmarks. However it isn't just the big explosions that benefit from the subwoofer, the percussive thump of the machine guns is frighteningly realistic at times. All-in-all this is a superb DTS:X mix and whilst some of the film's effects are a bit ropey, there are no such concerns about its kick-ass soundtrack – 10/10. Nothing more than a couple of Featurettes on offer here, with the 13 minute Making-Of covering most of the important territory, including the cast, the crew and the new director; the work done to 'better' the original and the style and setting of the piece, accompanied by an additional 7 minute Featurette on staging the key action sequences.


The extras may not be that impressive, but at least the steelbook will sit nicely alongside Olympus

Matching up to its predecessor's steelbook in terms of setting-based (rather than character-based) design, with the Houses of Parliament decimated on the front cover (although international alternatives have various other landmarks exploding like, for example, Big Ben, should you prefer that), London Has Fallen receives a UK steelbook with hints of background gloss, no debossing or embossing, but a decent enough style which, as already mentioned, perfectly matches up to the steelbook for Olympus. At the very least, the two cases will sit happily alongside one another, even if this sequel can't even stand in the shadow of the original. Even solid video and fairly impressive audio (although falling short of the US's superior track) won't leave you itching to pick this up; an inferior sequel worth a rental at best, or maybe just a spin when it eventually hits Netflix.