“Point this end at the bad guys.” 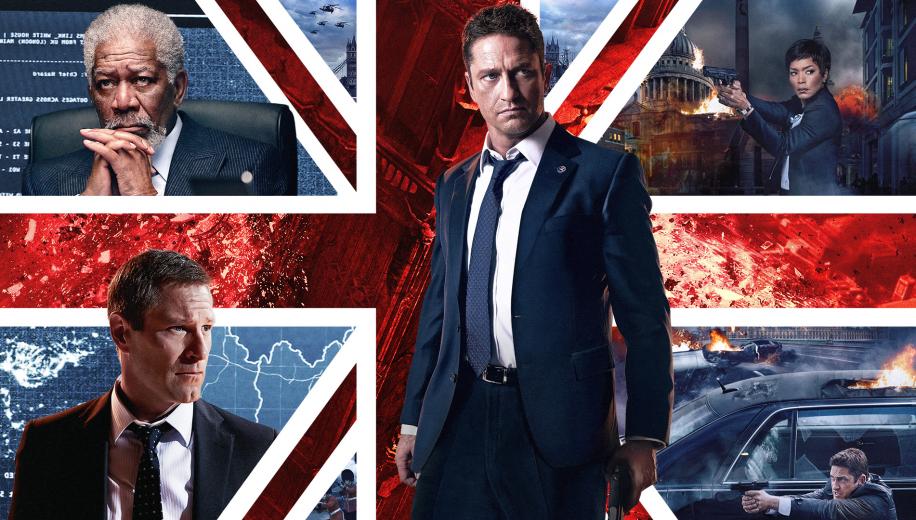 Making its 4K debut in a German trilogy, London Has Fallen gets the better presentation, even if it's the worse movie... although it does redeem itself somewhat on a lowered-expectations rewatch.

Losing Fuqua, and then even losing his replacement director, the first sequel hit us in 2016, directed by the (still) relatively unknown Babak Najafi, who joined the production a mere 6 weeks before shooting commenced, hitting the ground running in a messy monstrosity of a movie, which kicks off with an audacious disaster-movie-style opening that does to London monuments what ID4 did to key US locations, and sees a multitude of Western world leaders dispatched, and only the US President left fighting to stay alive on the dangerous streets of London. Thankfully, Gerard Butler's faithful one-man-army secret service agent is on hand to keep him that way.

Once you've seen it for the first time, and face-palmed yourself to death, going into it for repeat viewings is a slightly different experience

On release, London Has Fallen was appropriately compared to Taken 2 in terms of appalling sequels to surprisingly enjoyable action films. It's a nonsense script, which manages to be jingoistic towards the US even when set in the UK, which is even more unpleasant. It certainly doesn't help that the British police force and response to basically a terrorist invasion of London is portrayed as akin to Rowan Atkinson's Thin Blue Line, nor that little thought is given to the obliteration of most of the world's leaders vs. The President And Leader Of The Free World.

Oddly, though, once you've seen it for the first time, and face-palmed yourself to death, going into it for repeat viewings is a slightly different experience. Najafi may not have had a handle on the wayward story, but he stages action reasonably well, and, whilst the film spends its first half in disaster movie mode (arguably not unlike the first film), its final act has some impressive moments including a surprisingly good long take action sequence as Butler's bruiser storms a terrorist-infested building. As dumb action movies go, it's far less offensive second time out of the gate, and a perhaps even quite enjoyable middle entry in the "Has Fallen" Trilogy.

London Has Fallen makes its 4K bow in Germany as part of a "Fallen" Trilogy boxset, courtesy of Leonine Films, with no imminent UK (or US) 4K release on the horizon. Judged from the first title in this boxset, Olympus Has Fallen's 4K presentation felt a little like a bit of a Concorde / Iron Man Trilogy situation, with a half-hearted attempt at launching a title in 4K - and with Dolby Vision too - but not actually employing any kind of quality control on the end product. Olympus Has Fallen's  Ultra HD Blu-ray release was a prime example of everything that could go wrong with a 4K release, overplaying its blacks with Netflix levels of Dolby Vision implementation, and absolutely destroying image integrity with heavy-handed DNR and subsequent sharpening. It was a contender for one of the worst 4K presentations in the history of the format.

Thankfully, perhaps also helped by lowered expectations from the first movie's disastrous presentation, London Has Fallen looks considerably better in 4K. Whilst hardly popping with striking detail nor particularly outstanding DV implementation, this is a much more natural effort at enhancing the image without scrubbing it of texture; of enriching the colours without going into overdrive. It's actually, surprisingly, not terrible.

It's actually, surprisingly, not terrible

London Has Fallen always looked better than its predecessor, even on Blu-ray. Although the budget was less than the first film, the three years between productions were kind to this 2016 flick, which innately looks cleaner and perhaps therefore didn't need the heavy-handed DNR implementation which ruined the integrity of Olympus's 4K video. Here we get a clean image that still retains the kind of detail that you'd expect from a 4K presentation. Sure, not a top tier one - nowhere near - but 4K nonetheless, with facial detail and background textures evident in every scene. Rather than mere shots that looked good on the first film's 4K release, the second film maintains quality almost throughout, with only a few shots that don't look good.

Even HDR, WCG and Dolby Vision appear to have been used with some restraint, allowing for suitably eye-popping explosions, but not resulting in overblown whites, bleeding or garish renditions of an unnatural-looking palette. Maybe the UK locales help - and the more reserved UK weather - but either way, London is modestly richer courtesy of Dolby Vision. It's not enough to write home about, but nor is it anything worth writing a staunch criticism of. Which, under the circumstances, is a nice surprise.

London Has Fallen's 4K Blu-ray - similar to Olympus's - doesn't bother to deliver an audio upgrade in the form of a 3D object-based immersive audio track, of either the Dolby Atmos or increasingly rare DTS:X variety, but the sting is felt much more this time around primarily due to the fact that London's 2016 Blu-ray release did have a DTS:X track, the absence of which is pretty-much the nail in the coffin of this utterly worthless 4K trilogy set.

The track is very good, but you can't forgive the downgrade from the Blu-ray's DTS:X

The DTS-HD Master Audio 5.1 track is very good, but you can't forgive the downgrade from the Blu-ray's DTS: X. Strong dialogue delivery, keen representation of effects around the surrounds and solid backup from the score - as well as a decent amount of LFE weighting - all falls by the wayside as we already know the film has sounded better, on a preceding format.
﻿

Leonine don't bother to do anything on the extras front either, neither promoting anything new, nor even bothering to port the old extras onto the 4K disc itself.

Leonine don't bother to do anything on the extras front either

The accompanying Blu-ray is likely identical to the original Blu-ray release, affording the same making-of featurettes.

London Has Fallen was a terrible sequel to a surprisingly good first film, which does somehow get better - or at least infinitely more tolerable - on a second watch, when you realise that you're just watching a nonsense disaster flick which ends in a solidly staged action finale.

Sooner or later, Lionsgate will release these films on the format and hopefully do a semi-professional job too

Although the latest entry, Angel Has Fallen, has already earned a 4K release, the first two movies in the trilogy haven't graced the format until now, coming in a trilogy box set from Leonine in Germany.

The set has probably earned itself something of a warning by now - it makes little to no sense to purchase for a multitude of reasons. For starters, Olympus Has Fallen's 4K presentation is atrocious, and its audio doesn't offer any upgrade, so you'll find yourself favouring your old Blu-ray. Then London Has Fallen's 4K presentation is better, not defining, but certainly with the edge - just about - over the Blu-ray, but this release loses the DTS:X track, so, again, you'll almost certainly favour the Blu-ray. And Angel Has Fallen? Well, if you like these film's you'll likely already have that on Lionsgate's 4K release. So, basically, there is zero reason to import this expensive and utterly botched 4K release of the "Has Fallen" Trilogy. Sooner or later, Lionsgate will release these films on the format and hopefully do a semi-professional job too.