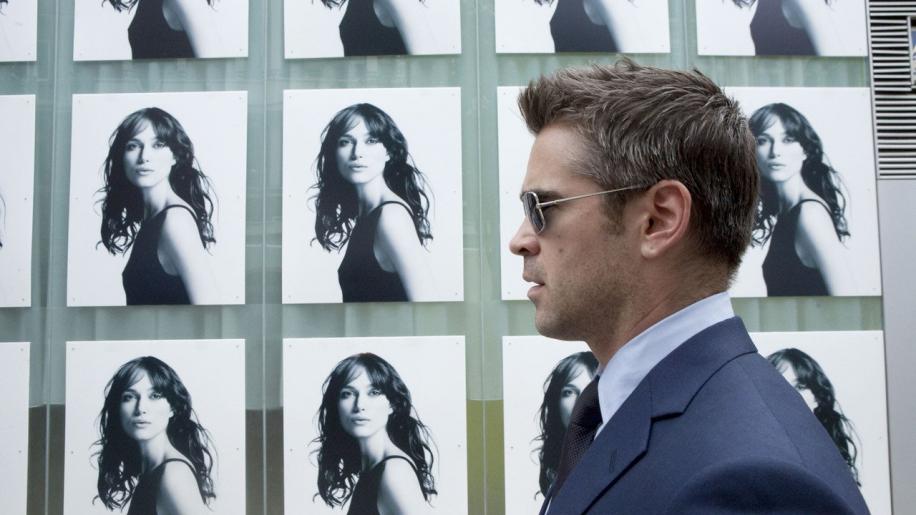 The Brits always do it different. Don’t get me wrong, over the years the film industry here has often been tainted by our dominant Western cousins, but – in general – Brit films have that edge to them which gives them a distinctive style, and a more authentic substance, even if the budgets are still comparatively small. Take, for instance, this latest Colin Farrell / Keira Knightley vehicle, London Boulevard. When I originally read the plot synopsis online – “A reclusive film star hiding out from the world in a Holland Park mansion hires a London criminal recently released from prison to be her bodyguard but ends up falling for him.” – it sounded a little bit like the Kevin Costner / Whitney Houston film The Bodyguard. But, knowing that it was a Brit flick, I knew that they would do things differently. And, indeed, they do.

Mitchell has just been released from prison. And he doesn’t want to go back. He’s a hardened London criminal who did time for ‘an altercation that got out of hand’, and the last person he hoped to see on his release was Billy – one of the reasons he was incarcerated in the first place. But he should have expected it. Billy, a small-time debt collector run by a big London gangster to traipse around Council estates threatening people to pay back their never-ending loans, wants Mitchell to come work with him and, with nothing better to do, Mitchell reluctantly agrees. But after pre-empting the mugging of a young girl who was ill-advisedly flashing her cash, he is recommended for bodyguard duty for a reclusive young film star named Charlotte. Desperately wanting to break free of his criminal ties, Mitchell slowly edges his way into legitimate work, spending more and more time with Charlotte – who is being perpetually hounded by the vulture-like paparazzi. But Billy’s boss has big plans for Mitchell, seeing him as a prize earner. Will he ever be able to get out of the violent business that he is in, or is the time that he spends with Charlotte just a bit of dream-like escapism?

It’s amazing what they can make a film look like it’s about. Many would be forgiven for thinking that this is just a Brit take on The Bodyguard, but actually that strand of the narrative takes a relative backseat to the proceedings. If it needs comparison to anything, it would be to the outstanding Al Pacino crime thriller Carlito’s Way but, even then, the story – of a gangster recently released from prison, and desperate to escape his criminal roots to be with a woman he loves – isn’t exactly unfamiliar territory. Throw into it a protagonist who is seething with a violent rage, desperate to avoid unleashing it and becoming the man that he was arguably built to be, and you have quite a few movie clichés all running around in one flick. And yet the Brits still do it different.

Colin Farrell takes the lead, and he seems far more comfortable in this kind of London criminal role than the likes of Clive Owen (who previously did the moody but somewhat ineffective I’ll Sleep when I’m Dead, directed by Get Carter’s Mike Hodges) – more convincing as a man with a reputation that he almost wished he didn’t have. Farrell’s done myriad productions over the years – from Terrence Malick’s New World, to Michael Mann’s Miami Vice – but he’s often returned to his Brit/Irish roots, whether it be in the unusual heist thriller Intermission, or last year’s Neil Jordan film, Ondine. If done right, a Colin Farrell film can be thoroughly entertaining – his performances often brutally raw – but I certainly prefer him to do a relatively low-key but nevertheless decent Brit flick (e.g. In Bruges) in favour of some of his more dubious Hollywood parts (I’m still not sold on his Irish Alexander the Great), and London Boulevard is a prime example.

Joining him we have an eclectic selection of Brit talent, from character actor Ben Chaplin (The Thin Red Line, Dorian Gray) as the weasel-like low-level debt collector Billy, to Naked’s David Thewlis, on eccentrically good form as Charlotte’s thespian manager. Then there’s Brookside’s Anna Friel, who is quite engaging – and suitably slutty – as Mitchell’s bipolar sister, who needs a fair amount of looking after. Ray Winstone pops up too, in the role of – surprise, surprise – the London gangster running this crew. Whilst he may have been quite typecast in these kinds of parts over the years, he still generally knows how to make the characters all a little bit different, and this is no exception. Nevertheless, I prefer seeing him in more unusual parts like that of Edge of Darkness.

Finally I have to talk about Ms. Keira Knightley, who is perfectly chosen as the well-spoken celeb who has ‘gone a little Howard Hughes’ after a terrible experience during the filming of her last movie. She’s a far cry from Whitney Houston in The Bodyguard, and Knightley perfectly combines upper-class pomp with almost child-like vulnerability – you get the feeling that paparazzi pressure is pretty accurately depicted here, and it must take its toll on all real celebs.

As already stated, London Boulevard takes a different route to tell the same kinds of stories that we have seen before from Hollywood, and in this it generally manages to stay a cut above your average, predictable genre entries. Farrell’s lead character seldom has to physically display his prowess – for a change – and his stance and occasional words of threat (all visibly backed-up by a surety in his attitude) all appear to be enough to abate many potentially violent encounters. He also shows himself to clearly have a problem with the line of work he has been born into, and – aside from one marginally trite dinner conversation with Ray Winstone’s boss – his is quite a genuine, unusually authentic role.

The trouble is, as with the unnecessary moment described above, almost all of the admittedly unusual characters appear to have an aspect too them which seems to take things a little bit too far. Charlotte’s manager slowly paints a backdrop of how his client (and loved friend) got into this mess in the first place, and through it you can see the lengths that he would go to in order to protect her, but in the final act his actions seem above and beyond, even for a particularly passionate and ‘just’ manager. Similarly Winstone’s gang boss has been twisted to have an unfortunately predilection towards raping his male victims (something which harks back to Malcolm McDowell’s villain in the aforementioned I’ll Sleep When I’m Dead) and I think this also goes too far to the extreme. (Don’t even get me started on Eddie Marsden’s cop, who still seems to be unrealistically stuck in the 70s) The ending? Well, I can’t really say much about it aside from the fact that I didn’t like it that much – what was once an unusual turn of events in these kinds of movies, now appears to be to common to have the intended impact, and thus left me fairly underwhelmed by the whole affair. Which is a shame, because, with a few tweaks, this could have been a bloody enjoyable Brit crime drama.

It’s based on a book by Ken Bruen, and adapted for the screen by William Monahan, who also makes his directorial debut here. He’s the guy who won an Oscar for the screenplay to The Departed, which, whilst admirable, is also questionable when you consider the fact that The Departed was a flagrant rip-off of the far superior Infernal Affairs. Here both Bruen and Monahan are walking a well-trodden path, but trying to offer up something different, and sometimes this works, sometimes it doesn’t. Considering the book was a pastiche on Sunset Boulevard (complete with older characters), it sometimes feels like (as is often the case) they had to do a fair amount of chopping and changing to bring this book to the Big Screen, which may be why some of the noted character eccentricities, and plot directions, feel a little trite or contrived.

All in all, I really wanted to love London Boulevard, and it started off quite promisingly, painting a picture familiar to Carlito’s Way, but doing so with an injection of Brit verve that makes it feel unusual, and thus much more watchable. The Bodyguard strands aside, which really almost seem like a secondary thought to the proceedings, the atypical characters, strong performances, and unpredictable events work extremely well, making the various players, if not likeable, then at least interesting; and sustaining you quite healthily as the story unravels. You certainly don’t know what’s going to happen next –or to whom. The trouble is that the end result just doesn’t hang together other than as a series of great moments, and great performances, in an otherwise pretty average package, which has too many characters for its own good, and can’t seem to stay settled on one story thread for any length of time. Add in a disappointing final act, and you’re left wishing it the movie had delivered more. Still, it’s a nice try, with some unusual ideas, top performances, and occasionally great scenes, and whilst London Boulevard may eventually be forgotten amidst the plethora of Brit gangster films, it is nevertheless an eminently watchable indie flick that is worth checking out.