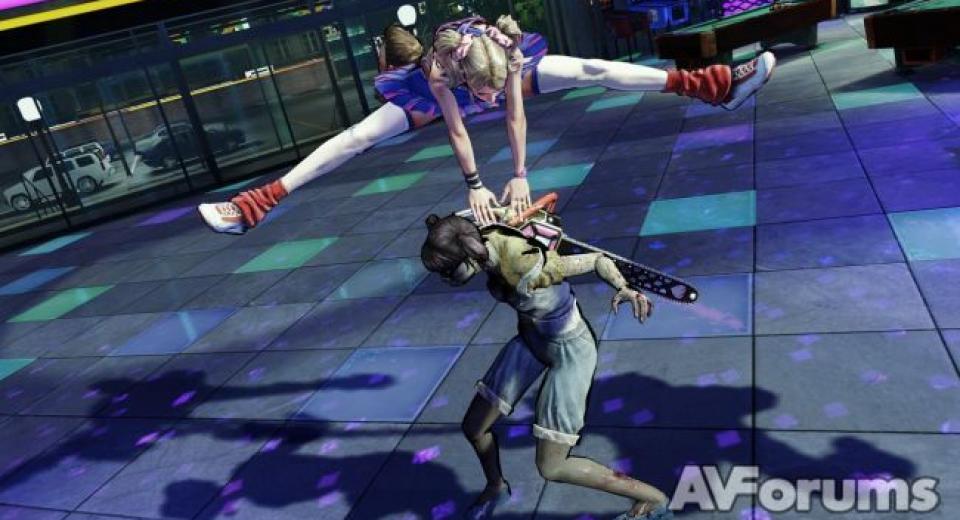 It's important to have an open mind going into a review, but I have to confess to approaching Lollipop Chainsaw with a good deal of trepidation. The promotional material and the box art hadn’t made the best impression: I expected nothing more than a string of exploitative camera angles, cheap sexual innuendo and sub-Bayonetta combat.

And although to some degree those concerns are valid, to stop there would be to do the game a disservice: Lollipop Chainsaw gets right more than it gets wrong.

The stall is set out from the opening cinematic. It’s ostensibly a leer-fest, with its slow lingering shots over our heroine Juliet’s scantily-clad body. But pay close attention and you’ll see that as introductions go, it’s actually one of the smarter sequences this year.

For a start, the hyper-sexualisation of Juliet Starling in this scene is also a subtle reversal of the “scenery censor” trope (that camera trick where someone is naked but a conveniently-placed ornament or pot plant protects their modesty), except in this case it’s Juliet’s face that is always partially obscured. Not groundbreaking subversion, granted, but a neat visual gag.

In the course of the two minute scene, we learn about the key characters in the game, all of whom are swiftly yet precisely sketched out. We even learn about some of the mechanics: “To keep my energy up, I eat lollipops.” Juliet’s ditsy narration gives the impression she has little of value to say, but in fact almost every line is relevant.

And as it is for the intro, so it is for the rest of the game. A deceptive amount of thought has gone into Lollipop Chainsaw. Grasshopper Manufacture’s Goichi Suda (No More Heroes, Killer7) has earned the right to have his work taken seriously, and sticking with Juliet through her six hour adventure ultimately pays off. The story kicks off with Juliet Starling setting off to meet her boyfriend Nick, only to discover there’s been a zombie outbreak in San Romero. Fortunately, she is from a family of zombie hunters so she is well-trained for such an eventuality. Armed with her pom-poms and titular chainsaw, she battles her way through the undead hordes of the 'Rotten World', who are doing the bidding of the Dark Purveyors - essentially the level bosses she'll encounter throughout the game. Nick is bitten and ultimately ends up as a decapitated head attached to Juliet's belt, via an amusing plot contrivance that I won't spoil for you here.

Lollipop Chainsaw's gameplay is lifted straight out of the arcades of the early 90s. The mechanics are of the underdeveloped hack 'n' slash variety, which will inevitably draw comparisons with Bayonetta and the (best forgotten) Onechanbara.

Combat is a mixed bag. Smacking zombies with pom-poms and carving them up with the chainsaw feels satisfying enough, but Juliet's rhythm lacks the fluidity of other games of the genre. This is compounded by the fact that the zombies require more and more hits to take down as the game develops. It can, at times, feel like a bit of a slog, and almost as if Juliet is becoming weaker as she progresses.

That is, of course, not actually the case. Purchasable power-ups are available from the outset and do manage to add some diversity to Juliet's arsenal. Zombie killing earns gold and platinum medals that can be traded for everything from health power ups and new combos, right through to new costumes and in-game music.

But despite the unlockables, you might well find yourself falling back on the same combos, which is often little more than button-bashing the pom-poms and heavy chainsaw attack. That's not because the depth isn't there, it's more that the balancing isn't quite right. Attacks available early on in the game are just as effective at the end, and there's little incentive for the player to vary their strategy. To break up the action, there are a number of minigames that recur throughout the campaign. Despite being bestowed with the same imaginative good humour found in the rest of the game, none of them are particularly interesting. For example, Zombie Basketball involves decapitating the undead, resulting in their heads flying into the hoop, while Zombie Baseball requires you to protect a runner (Nick with his head attached to a zombie’s body) as he staggers from base to base.

The latter is particularly frustrating as it requires Juliet to use the chainsaw as a gun (the “Chainsaw Blaster”), which is a nightmare to control. The auto-aim fails to lock on properly to moving targets, and camera control becomes sloppy and erratic. Fortunately, while the Chainsaw Blaster is available through most of the game, it’s only necessary at a few points.

Much the same can be said of the Chainsaw Dash, which is a kind of charge attack. In one particular section you are expected to use it over extended distances, which can prove irritating - trying to control Juliet in this mode is like trying to steer a drunk horse. She seems to react late to every command, and her turning circle is ridiculously wide given the narrow areas she has to pass through.

But all of that is forgiven when the boss fights come around. They are lengthy and multi-staged affairs, with repeated patterns of behaviour that need to be learned and used to Juliet’s advantage. The Dark Purveyors are big, brash, and brightly coloured - and without exception, a joy to take on.

It’s that bold colouring that’s a large part of Lollipop Chainsaw’s considerable visual charm. In an era when many games’ palettes range from muddy brown to cement grey, it’s a breath of fresh air the first time Juliet goes ‘Sparkle Hunting’, a slow-mo effect activated when she decapitates three or more zombies with a single swing of her chainsaw, during which rainbow-coloured lettering is printed over a space-vista background filled with glittering stars and purple nebulae. Combined with the subtle cel-shading and set against the backdrop of a fun 80s-themed soundtrack, Lollipop Chainsaw’s art direction is really something special. Sadly, the animation isn’t always quite at the same level but in context that’s a minor gripe. What I didn’t expect from Lollipop Chainsaw was to find it quite so funny. I was ready - willing, perhaps - to think it stupid, crass and charmless. In fact, despite appearances, it isn’t overly offensive, unless you’re particularly sensitive to a bit of swearing (although there is enough adult content to justify its 18 certificate). But a strong cast of characters support a bouncy script full of one liners: Nick has a lot of the best dialogue ("This is fun, it makes me forget all my friends are dead!") but Juliet contributes her fair share, and the talking zombies are often amusing too.

Ultimately, Lollipop Chainsaw isn’t about to revolutionise video games, or even the hack-n-slash genre. The campaign is fairly short but an online leaderboard and adjustable difficulty adds longevity for those so inclined. The gameplay has its highs - most notably the boss battles - and a few lows, but for the most part it is simply solid. However, there is enough charm in Lollipop Chainsaw’s presentation, characterisation and script to make this a game worth recommending. If you fancy something a bit different during the barren summer months, you could do a lot worse than this sparkle-filled, bubblegum throwback to the coin-op games of years gone by.