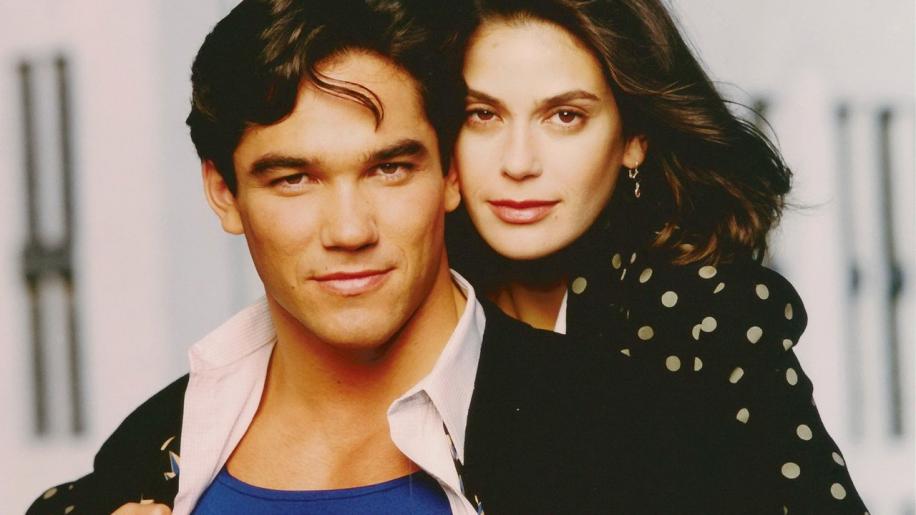 Bearing in mind that this is a TV show from the early nineties, there are still a few issues with the image quality that must be mentioned. All episodes, including the Pilot are in traditional 4.3, preserving the original broadcast ratio, but none appear to have been re-mastered, with lots of grain floating about and some signs of damage. Worst afflicted is the Pilot, which gives the impression of having been lifted from a well-worn VHS master, with flecks and scratches aplenty, and a quite fearsome level of grain in some shots. Contrast changes aren't handled very well either, with one or two white-outs occurring during dark-to-light transitions. These problems occur throughout the package and even if, for the most part, it's not too distracting, considering the effort that could have been made for such a popular release, it remains a little surprising that these issues went unaddressed.

On the plus side, however, every episode has good colour fidelity with no smearing or saturation. Even if the palette seems to favour that cosy, traditional type of TV fuzzy-warmth, the effect is still pleasant throughout, if a little unrealistic. Skin tones literally burn with health - and tons of makeup - giving the cast that orange-peel sheen. Detail does suffer within this glowing environment, though, with an overall softening of the image. Some episodes fare worse than others in this department with The Green, Green Glow Of Home in particular suffering from this Super-softness. Exteriors come off the worst, with backgrounds often quite mushy and indistinct. As usual, the larger the screen the worse these problems will appear. On a 32 inch screen I was hardly bothered, but on a 44, some episodes had an unwelcome hazy veneer.

Black levels range from sometimes very good indeed, as in Honeymoon In Metropolis with its atmospheric underground car park sequence, to the pretty poor, with the Pilot bearing the brunt of a severe lack of depth. But, to be honest, folks, in my main, non-reviewer mode that refuses to scrutinise these things too deeply, none of the above would be enough to put me off buying this set. Coming with a Dolby Digital 2.0 track, Lois & Clark struggles to achieve any level of bombast. Dialogue is always clearly delivered and never muffled and the score remains steadfastly sharp and distinct, but the entire soundscape is confined and denied any opportunity to soar. Obviously, we shouldn't be surprised at the lack of any surround, but even so, the whole design of the sound seems muted and downtrodden. Sometimes, it can come across as slightly dislocated and tinny, with the big moments, like explosions or gunfire, lacking any kind of oomph or direction at all. There is little or no separation across the front, and even when it does occur, it is unconvincing. When we are treated to some steerage - most notably during the 2-episode finale - it is used only very sparingly, relegating this DVD incarnation the same audio impact it had must have had way back in the early nineties. Not very impressive. Some effort at an upgrade would have been appreciated. There's not much to speak of here, either. First off, we get a Commentary Track on the Pilot episode from a back-slapping, pleased to be remembered Dean Cain, the intelligent and informative Executive Producer Deborah Joy Levine and the quietly reflective, and oft-prompted Director Robert Butler. This is not as enjoyable as it could have been with only Levine actually offering anything of real interest. Cain has some anecdotes but you can't help feeling that an opportunity has been missed here. It would have been wonderful for Teri Hatcher to have sat in on a couple of episodes with the Man of Steel, himself - there would have been some laughs there, I'm sure. Certainly a chat-track team-up for Season 2. Disc 1 also houses the original Pilot Presentation that Levine offered up for the network and, perhaps more importantly, at the ComicCon in 1993 to comic book fans to allay their fears. After a three-minute introduction we get to see the rough stock footage (complete with wires on show) and this runs just shy of 20 mins. It's quite nice to see, although I believe that only the true fans will really lap it up.

The rest of the extras are to be found on Disc 6. Starting with the Retrospective Documentary, From Rivals to Romance: The Making Of Lois & Clark (25.49 mins) contains interviews with most of the main players involved, except for the late, great Lane Smith and Michael Landes (who played Jimmy Olsen) and shows us heaps of clips culled mainly from the Pilot. Levine confesses to have never read a comic book and details her decision to transform the heroics into a fluffy rom-com. Dean Cain, deemed too young for the part, eventually won his cape due to the pressure of his own fan club. Hatcher proved herself to be the best kisser on the casting couch, according to Cain. John Shea comes across as very articulate and incisive, although perhaps a little too serious and even K Callan and Eddie Jones get to reminisce. The cape gets a lot of talk, reminding me of The Incredibles' anti-cape tirade from Edna Modes. Not a bad little documentary, nowhere near as grating as it could have been, but still feels somewhat under-nourishing.Next up is the 6.35 mins featurette detailing the show's less-than-special visual effects. Taking Flight: The Visual Effects Of Lois & Clark presents us with the wire-work and green screen process that the makers hoped would have us believe that a man could fly. It's nice to see Cain fly into the painted cityscape backdrop outside the Planet's window and John Shea gets to reveal his delight at finally being given the chance to fly, himself, during the show's finale. The rotating room gag that enables Clark to literally climb the walls of his apartment gets some attention, too, but despite how much they all seem to love the effect, it still looks appalling.

According to the back of the box, there's a separate mention of interviews with Dean Cain and Teri Hatcher but, unless they are referring to those contained within the Making Of and Visual FX featurettes, they are either missing or cunningly hidden as Easter Eggs. If that's the case, I haven't found them yet. Perhaps they were on that damaged Disc 5?

There's even a limited edition bonus disc from Warner celebrating their 50th Anniversary of the Best Shows on Television. It's an episode of Smallville, from Vol 7. Yep, it's Superman, I know, but I don't think it has a part in this package, to be honest.

Overall, it's nice to see some extras with this set, but they do smack of fluff filler, lacking depth or anything substantial other than simple nostalgic joy for the show. I can't fault that, but let's hope that Season 2 gets a bit more meat on its bones. Well, given my apathy towards Superman and a dislike of sanitised TV spin-off shows in general, Lois & Clark had its work cut out in trying to impress me. But, do you know what, I thoroughly enjoyed this season. Sure, it's daft and dated, but there is a tremendous sense of fun injected into each episode, the cast are having a ball and the witty script ensures some chuckles for everyone. View it as romantic comedy with a hint of sci-fi and you can't go wrong. View it as Superman's heroic exploits and you're going to be sorely disappointed. Despite the slightly lacklustre extras and the less-then-spectacular AV quality, this is still a package well worth picking up. Just watch out for that booby-trapped gatefold. Warner had better rethink that for Season 2.