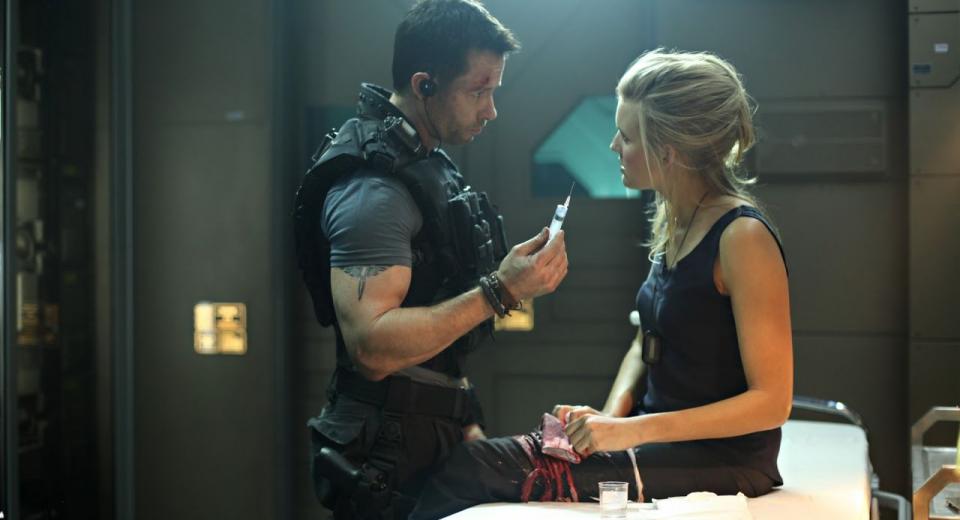 “Die Hard Meets Blade Runner”, or so the quote on the front cover would have you believe. Whilst Luc Besson’s latest writer/producer outing does indeed blend elements from both of those movies, as well as – more obviously – Escape from New York (only set in space), I suspect that nobody in their right mind would actually draw serious comparisons between this half-baked PG-13 just-about-dumb-enough-to-be-vaguely-fun actioner and any of the aforementioned genre classics.

In fact, the mostly engaging lead performance from Guy Pearce is pretty-much the only reason to actually watch this movie, making it a just-about tolerable slice of barely-B-movie-status frivolity, as opposed to the bargain bin DTV release that it probably deserves to be.

The story has CIA Agent Snow – Guy Pearce, acting like a wisecracking Snake Plissken – framed for murder and sentenced to life imprisonment in stasis on the off-world MS One maximum security space prison. Around the same time the President’s daughter (Maggie Grace – Taken, Faster) happens to be visiting the prison to investigate rumours about the prolonged stasis affecting the prisoners’ sanity. Needless to say, the prisoners get loose and take her hostage, and Snow is persuaded to go on a one-man mission to retrieve her.

It must have seemed like a reasonably good idea on paper. Besson probably pitched it as if he’d never even seen Escape from New York, but, even getting past the classics that he shamelessly rips off, there’s more than enough room to with these genre greats to rework some themes and ideas into an enjoyable new b-movie actioner. His premise is strong enough – basically Escape from New York... in space – and he introduces a few new elements (the framing; the conspiracy involving the psychotic convicts) in an attempt to make it feel different, but most of these ideas are severely compromised by their execution.

This is the debut effort for co-directors (and co-writers, along with Besson) James Mather and Stephen St. Leger, and they give us a fairly paint-by-numbers effort that only furthers the argument that there’s simply nothing original about the genetic makeup to this particular beast. That said, they are reasonably competent in their delivery of the sci-fi elements, setting the futuristic scene well – especially when you consider the fairly insubstantial $20 million budget (which only really shows during the tragically poor flashback sequence that looks like something out of a pretty average video-game). There are a couple of nice touches, and plenty of nods to Besson’s own directorial style – you can feel his hands resting on their shoulders throughout, even if he’s still long past his prime – but the reality is that, for a sci-fi actioner, the action element simply doesn’t fire on all cylinders.

There really is room enough for the action to work, but, even without its PG-13 restrictions (this is the unrated version), this still feels like a fairly impotent PG-13 actioner at heart. The confrontations degenerate into unlikely brawling far too quickly; the tough guy lead isn’t actually half as tough as he would have you believe (other than, perhaps, in taking straight shots to the face during a fun interrogation scene); and most of the moments which could have made into excellent fight confrontations either go wrong, or fizzle out immediately.

The majority of the fights – guns or fists – rely on the unusual setting to entertain, rather than the actual action (like the zero-gravity-esque punch-up) which works, but only as a very short-term fix. Oddly, some of the best action comes from outside the space prison – with the auto-turret defence against incoming ships giving us some engaging Battlestar Galactica-like sequences. Hell, there isn’t even a final fight, and the bad guys easily leave a much bigger body count (even amidst their own) than our hero does.

Thankfully Guy Pearce’s smart-ass action-anti-hero, Snow doesn’t need his fists to save the day (even the directors commented on his scrawny physique, and he promptly bulked up before filming). The ex-Neighbours star has never really taken on an action-hero role; indeed whilst he may have played a few anti-heroes (Ravenous, Memento, The Proposition), he suits snivelling villains (The Count of Monte Cristo, The King’s Speech, Prometheus) more than he does outright heroes.

Here he plays Snow as if he’s an anti-hero, who doesn’t care about anybody or anything, but you never really buy it – he’s a hero through and through, a goody-goody sort who just likes to act tough. It doesn’t matter though, because Pearce has an absolute ball hamming it up in the lead. He doesn’t take on Snake Plissken’s gravely, Clint Eastwood-like drawl, but instead goes down the Bruce Willis route (think The Last Boy Scout more than Die Hard) of wise-cracking his way through tough situations. Hell, every situation.

Occasionally he goes too far, frequently bordering on irritating arrogance rather than the cool confidence he’s clearly aiming for, but his over-the-top performance is still the core source of the majority of this movie’s fun factor. From the opening interrogation – where Pearce gets some very witty retorts – to the interaction with Maggie Grace’s unlikely First Daughter, we may not have seen this side of him before, and he may not have quite perfected the style, but he still does a pretty good job.

Surprisingly, Grace isn’t the worst co-star, despite what you might expect after her acting-like-a-12-year-old performance in Taken. She actually makes for a reasonably good foil to Pearce’s wise-cracking hero. Even more surprisingly, the bad guys aren’t complete caricatures – even if the twists are telegraphed from miles away – and Brit actors Vincent Regan (300, Danny the Dog) and Joe Gilgun (Harry Brown, Misfits) fare surprisingly well as the leaders of the psychotic prisoners, with the latter in particular chewing up the scenery. Somewhere in-between, Peter Stormare (The Big Lebowski, Get the Gringo) and – with a terrible American accent – Lennie James (Colombiana, Line of Duty) struggle through the script and green-screen scenes as two Secret Service agents heading up the mission to rescue the First Daughter.

Yet none of them survive the mediocrity of the piece quite like Pearce, whose contribution remains arguably the only lasting reason to watch it. Beyond the sometimes ineffective action, the somewhat shoddy CG, the predictable plot and one-dimensional characters, Pearce sails this flimsy sci-fi actioner into cheesy b-movie territory with a big couldn’t care less smirk on his face and the end result is pretty watchable, if utterly unmemorable. It’s big, dumb, throwaway fun – perhaps even a slight step up from Besson’s last writer/producer effort Colombiana, and just about enough to make for a mindless bit of pop-corn fuelled lazy-night-in entertainment.