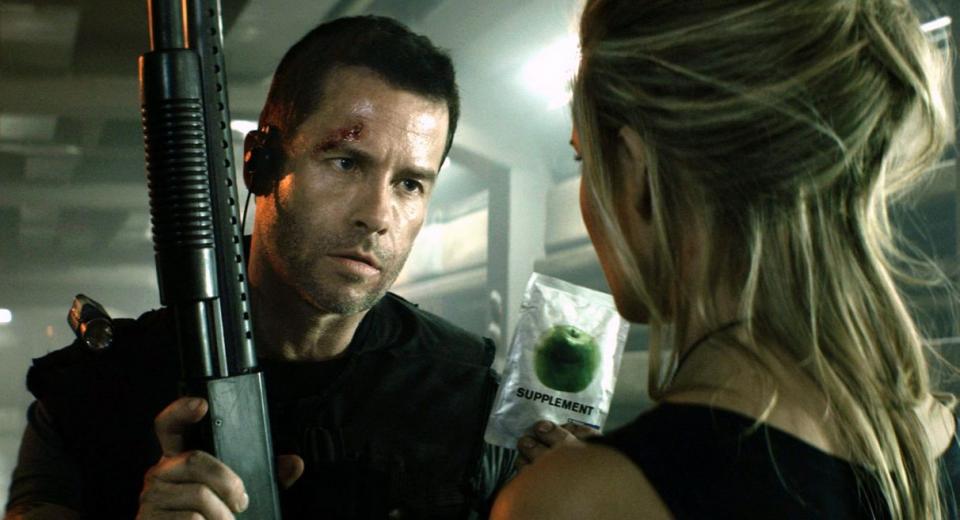 Luc Besson is a man with quite a raft of classics under his belt. They are sometimes moody and slick, like Leon or Nikita; sometimes experimental and moving, like The Deep Blue; and often downright eye-poppingly colourful and fun like The Fifth Element. Lockout certainly captures two of those elements very well, and they are the two you would be most likely to associate with a movie about an army jock, convinced to break the president’s daughter out of a maximum security prison floating in space. Admittedly not his most memorable writing, but in the hands of perhaps more experienced directors it could really have been something special. As it is, Stephen St. Ledger and James Mather manage to conjure a film that, while not transcendent, certainly packs one hell of an enjoyable punch.

The premise does exactly what it needs to do, and sets the stage for a fast paced action movie with hints of espionage and more than a smattering of sci-fi. The main character, Snow (Guy Pearce), is the wise-cracking hard as nails army vet who finds himself on the wrong side of an inept, scheming CIA executive. When Snow arrives at a hotel, meaning to meet up with an old friend a colleague who has asked for help, he is unexpectedly thrown into a fight for his life. His old friend is killed before his eyes and entrusts a package to Snow that he must protect. Snow flees, and manages to pass on his package to his partner Mace before being caught by the CIA.

The CIA finger Snow as the killer, and threaten him with 30+ years in stasis, where he’ll likely lose his mind as well as his freedom. Snow, cool as a cucumber, plays his cards to his chest and only opens up to CIA officer Harry Shaw, played by the brilliant Lennie James. Meanwhile Mace, unbeknown to Snow, has hidden the package before getting arrested himself.

Sometime later, while on a mission to inspect conditions of prisoners held in stasis aboard a floating prison station in space, Emilie Warnock, daughter to the president of the United States, is captured when prisoners break free and take the station to siege.
The CIA have only one option open to them, although the reason for this isn’t especially clear, and that is to send in the newly convicted Snow to rescue the young Miss Warnock. They hatch a plan to get Snow on-board the prison undetected, leaving him free to grab the president’s daughter and escape undetected. Snow seems resistant at first, but is soon persuaded when Shaw surreptitiously informs him that his friend Mace is on board, and being the only man who knows the whereabouts of the secret package is Snow’s only real hope for justice.

Of course, things don’t go as smoothly as the CIA or Snow would have liked, and he quickly finds himself in a cat and mouse game with the station’s newly appointed overlord Alek, played by the brooding and imposing figure of Vincent Regan, and his deranged brother Hydell played by Joseph Gilgun. Snow manages to best the lumbering, newly awoken convicts by using his cool head and army know-how, but doesn’t shy away from shooting them in the face when pushed to either. Building to an epic climactic scene, we we follow Snow through his one-man mission that basically involves him punching everyone in the face really really hard, and he may even get the girl too.

The movie touches on some interesting subject matter, looking at the treatment of convicts, our need for them to be out of sight and segregated from society, and what we are willing to sacrifice for that piece of mind. Obviously this is done within the framework of a tongue-in-cheek sci-fi action flick, whose solution is to blast said criminals into space, even if the stasis that they’re put in can often leave them irreversibly brain damaged. But despite this, it does just enough to question the moral implications if such future were to exist.

All in all, Lockout is a competent action movie. Its star, Guy Pearce, plays the role with real gusto, and seems at times to be channelling both Robert Downy Junior and Johnny Depp, as he delivers his lines with great comedic timing and presence. What I found genuinely interesting was the fact that sometimes it feels as though Pearce, whilst wise-cracking and basically punching everyone in the face, is watching it alongside the audience, almost poking fun at its shortcomings and giving us a wink and a wry dig in the ribs, as if to say “ha, can you believe I just said that?” In fact, everyone in the cast provides genuinely entertaining performances, working with a script which, while functional, could have done with a little finessing.

Overall the movie does feel a little rushed, and this is perhaps due to the rather modest budget of around $20m (estimated). The CG is not what you would expect from a big box office punt like Lockout, especially when given the strong if B-grade cast (Pearce notwithstanding of course). It often feels more like early pre-visualisation work rather than the finished article, but it remains functional. Nowhere is this more obvious than in the chase scene near the beginning of the movie where Snow is trying to evade capture on a one-wheeled futuristic motorcycle. The scene flits between stylised cartoony visual effects to cheap looking car crashes, and never quite makes up its mind what it wants to be. It soon becomes apparent, when the cartoony style is not carried any further in the movie, that this is likely to be nothing more than CG on a budget. It really is functional, and didn’t spoil the overall enjoyment of the film, but the modern audience has come to expect more.

However, the pace is really what lets the film down. It starts out at a break-neck speed and doesn’t really slow down until the end of the movie. The dialogue is delivered swiftly, and the scenes flow so quickly from one plot point to the next that it is often difficult to follow, even given the relatively simple plot. A little more time and a little more clarity would have gone a very long way.

It's fair to say that Lockout doesn't take itself too seriously, and for this fact it sees great benefit. From one liners referencing other movies and events, such as when Snow says “Contrary to popular belief, I'm not actually Houdini,” - Pearce actually played Houdini in the somewhat questionable Death Defying Acts back in 2007; to the fact that the two main Antagonist brothers being named Alex and Hydell, where Alek Hydell was in fact an alias used by Lee Harvey Oswald. It's all pretty tongue in cheek, and for a seat of your pants action romp, it does just enough to convince you that it's not trying to be too serious.

When all is said and done, Lockout is more than competent at delivering thrills and funny one-liners and is most certainly worth the hour and a half you’ll spend chuckling along to it. It is genuinely fun to watch, and delivers some memorable, if not A-list action set-pieces. Pearce is a pleasure to watch, and puts himself firmly in the category of worthy action star for the current generation. If a re-hash of Die Hard was ever on the cards, Pearce could be a strong contender for making fists with his toes. For the record, however, I could never -ever- condone such a heinous and completely reprehensible idea.