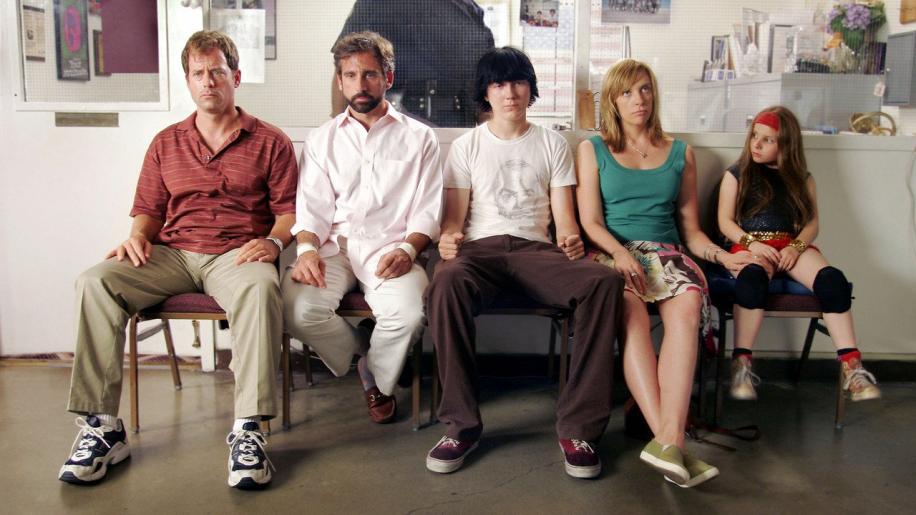 “Everyone pretend to be normal.”

A dysfunctional family hits the road to take their youngest child to a beauty contest.

Let me introduce you to the Hoover family since you are going to be taking a long drive with them. We'll start with dad Richard (Greg Kinnear). He has written a success motivation course called The Nine Steps, based on his core belief that the world is divided into winners and losers. His dream of stardom on the motivational speaker circuit has brought the family to the edge of bankruptcy and they desperately need his agent to win him a deal. Mum Sheryl (Toni Collette) is hanging in there. She is holding the family together and supporting Richard, without necessarily believing in his product or indeed his worldview. You get the feeling that without the cigarettes, she'd have gone under some time ago. Teenage son Dwayne (Paul Dano) is a Nietzsche-reading nihilist who dreams of becoming a test pilot and has taken a vow of silence until he reaches his goal. His sister is seven year old Olive (Abigail Breslin), a sweet and tubby Miss America wannabe. Living with them are Grandpa Edwin and Uncle Frank. Grandpa (Alan Arkin) is a foul-mouthed ranting senior, with a drug problem that has had him kicked out of his retirement home, while Frank (Steve Carell) is Sheryl's brother and the 'pre-eminent Proust scholar in the United States'. Success incarnate, then? Not quite. He is recovering from a suicide attempt after losing a prestigious award to his main rival in both love and academia. He's also lost his job.

Got all that? Then let's go.

The film begins with an economical and effective introduction to each of the characters, but the fun really begins when Olive learns she has won a place in the Little Miss Sunshine pageant in California, Mom and Dad Hoover decide to give her her big chance, but can't afford the air fare from their home in Albuquerque to California. Neither can they leave any of their vulnerable charges home alone. There's only one option: they must all drive to California together in the family's clapped-out VW camper van. From this point on, Little Miss Sunshine is a situation comedy with a cringe factor so high sucking lemons would seem like a relief.

It's also a road movie and a family drama. In good storytelling tradition, this family neatly represents all the main stages of life: We have the naivety and hopefulness of childhood, the confusion and rejection of parental values at puberty, the perpetual treadmill and disappointment of adulthood, and finally the bitterness and regret of old age. Oh, and then you die! The film also packs up our family in an old van and hurls them across the country where they can argue, eat and laugh together, dealing with crises as they arise; somehow just doing enough to make it through. Ultimately, they survive because they pull together when it counts. A tidy little metaphor for life, if you like that kind of thing. Every story needs a baddie, though, and Richard is almost it. He is the character it is hardest to relate to. He has gone for broke with his course, which amounts to little more than pre-packaged platitudes about focusing on your dreams and never giving up. Worst of all, he actually believes this stuff and has done a pretty thorough job of filling his kids' heads with it. In the most poignant moment in the film, Olive tearfully reveals she fears losing most of all because daddy hates losers. Fortunately for Richard, family and circumstances prevent him from completely losing his humanity to a dubious formula for success. The people around him retain their individuality, gel together as a family unit and don't reject him in the process. There's no cheesy resolution to their problems in the end. It's an entertaining and uplifting experience and the lack of pat answers strengthens the effect rather than weakens it.

It is said that Arthur Miller's Death of a Salesman had grown men weeping in the theatres when it was first shown. These ordinary working men recognised themselves in the sad spectacle of Willy Loman's struggle against failure and despair in the Land of Opportunity. You are probably waiting for a sentence beginning, “This film invites us to question...”. Nah. What this film does is make us laugh at the absurdity of it all. Little Miss Sunshine picks up the Death of a Salesman baton, but runs in the opposite direction. The American Dream is still a subject worth tackling, but it disregards painful exploration in favour of just taking the mick. “Life is one f**** beauty contest after another,” rages Dwayne. His tirade is interspersed with grotesque and ludicrous scenes from the Little Miss Sunshine contest. He's definitely got a point.