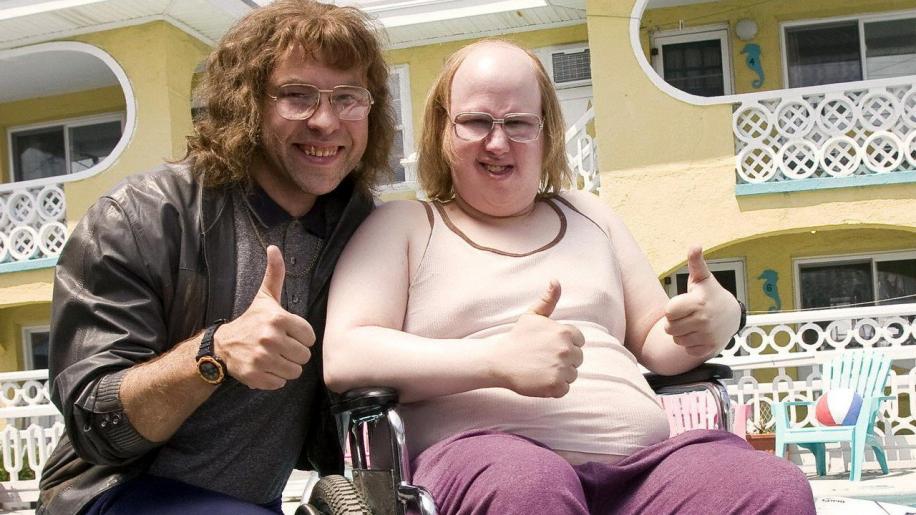 The picture quality is not that bad. There is a soft focus feel to the image, like the new series of Doctor Who but not quite as bad as all that. This focus technique adds a kind of cinematic feel to the image, but at the same time robs most fine detail, too. Colours are a little too gaudy but I guess that this is on purpose to add a surreal edge to some of the sketches, or amplify the costumes and therefore characters on screen. I noticed very little distortions or noise on screen, either. For a TV series, especially a sketch show, this is a very good example of fine picture presentation. One of the only things really liked with Little Britain is the music. From the opening sequence to the in program efforts, the music is uniformly good. In particular is the faux-Russian theme in the babysitter sketch. Otherwise the sound is reasonable with little studio echo or overly bright vocals. Such vocals are always clear and Tom Baker's deep baritone should test the bass to satellite overlap of most Sub-Sat systems nicely. There are a fair bit of extras on this disc, but most of them are extensions of the series. “Little Briton Survey” is merely a re-visit to the main characters, so if you actually like Little Britain, then fair enough. I don't and so found little of worth in this extra.

Much better is the Making of... documentary which is unusually exhaustive. Even if you don't like the main series, this extra is far enough removed to offer some enjoyable content. Extras offer some insight as well as Mat Lucas and David Walliams. I found it strange that the two leads talked with some authority on how a modern day sketch show must have something different to offer a modern audience. Clearly these two have a good handle on what is good and what isn't (anyone remember Walliams when he was on Sky's Games World?). It's just a shame that Little Britain doesn't offer anything new at all. The second Series' Making Of... is slightly more in depth. The old women's vomiting scenes in particular are explored. The kids that are hosed down with lumpy spew seem to be ill at ease when they are told what is going to happen, while the girls are jealous that they aren't going to be touched at all.

There is a full recounting of the Comic Relief special on the second series disc. This has a genuinely funny interview with Elton John which is, as you can imagine, full of sexual innuendo. There are some outtakes on the second disc, too. As usual, these outtakes are very funny - easily outstripping the actual series.

It is also pleasing to see so many commentaries on these discs. Often you see only one or two episodes covered, but Little Britain is positively over flowing with them. Not only that, but there are some truly excellent content, should you like the series, in the form of interviews and TV spots. As a release, and for fans of the series, this two disc pack is a remarkable example of added value. I hate Little Britain with a passion that verges on the religious. If I could use 400 point fonts on this review I would have used them for that previous sentence, in italics and in bold. Possibly underlined, too. I would plaster it all over the studio this rancid excuse for a comedy is filmed and pummel all the scripts into a papier-mâché model of Craggy Island with the moto: Now THIS is funny, and you aren't.