Does Sackboy deserve the sack? 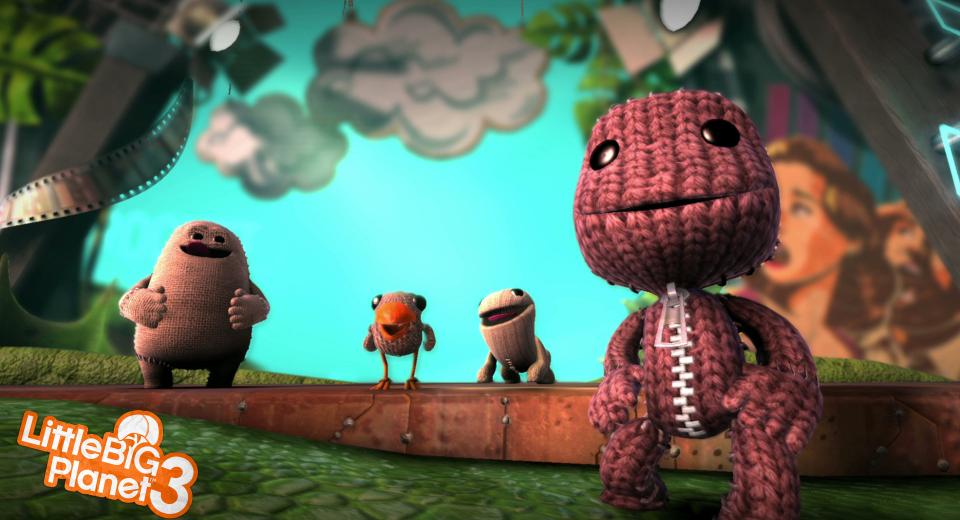 Making an initial splash on PlayStation 3 with his first outing, he has since gathered a cult following which has sent the LittleBigPlanet series higher than Media Molecule probably thought it could go.

Having breathed life into the lacking platform genre on PS3, Sackboy finds himself yet again carrying the torch and leading the way for the aging machine. But whilst the LBP series looks to continue its success, it does so under new management.
Original creators, Media Molecule, have parted ways with the brand, and Sumo Digital now find themselves in charge of keeping the series from going stale and preventing Sackboy from becoming split at the seams.

So, with a new group being given the keys to the cardboard and sticker cupboard, does LittleBigPlanet 3 creatively make use of an old formula, or make a mess of it all? From the moment you boot LBP3 up, you’d think that you’re playing either of the last two games as it painfully holds your hand and guides you through the introduction level. It’s almost as if it doesn’t trust you after all this time, which is great for newcomers, but for those who are familiar with the series it’d be nice to be free to crack on with the story levels rather than be taught the basics for a third time. Once you’re let out of Stephen Fry’s sight, the main string of levels proves to be some of the best which we have seen to date.

Sumo Digital bring something fresh to the drawing board

A maniacal Newton (voiced by Hugh Laurie) unwittingly leads Sackboy on a path that will unleash three titans upon the worlds of the Imagisphere, stealing all of their creativity one by one. To prevent the titans from wreaking havoc on said worlds, Sackboy ventures to awaken three heroes who rescued the worlds from disaster the last time the titans were released. Oddsock, a dog-like creature, can wall jump; whilst Toggle can switch between a heavier and lighter form; and finally Swoop, a bird-like figure, can grab and lift objects. Their usefulness stretches further than that of Sackboy’s which is both refreshing and odd, as you’ll end up pining for them when they’ve left; don’t get too comfortable with their company, after their introduction they’re used infrequently thereafter. This isn’t to say that playing as Sackboy isn’t fun, because it is, it’s just that in comparison to his new chums he seems a little underwhelming. To give him more appeal, Sumo have kitted him out with a load of new tools and equipment to beef him up so he's not outshone by his fellow companions. First off he’s given a vacuum tool which can be used to suck and blow (no sniggering) foam objects, and further down the track you can muck around with a teleport device and a helmet that lets you glide along railings.

Design wise, this is probably the best game yet in terms of the challenge brought about by clever design and craft, and thus the enjoyment it elicits. Letting it down however is the frequent checkpoint inclusion which takes away much of the peril and challenge which was seen in 1 and 2.

Beyond the story levels you find a host of additional quests and challenges unique to your three pals, each requiring their unique abilities to complete. There are platforming challenges with which Oddsock must use his speed and wall-running abilities to make light work of, with building challenges also making a welcome appearance. If anything, the latter provide a welcome and worthwhile introduction into the whole world of creativity within LittleBigPlanet, as the whole thing can be rather daunting to newcomers.

In what seems to be the year for games being plagued by bugs, LittleBigPlanet 3 failed to get its vaccination before being shipped. Even with a launch patch (inevitably with more to come) the game still had issues with audio dropouts, frame rates dropping and even little Sackfellow disappeared in some rare instances. When Sackboy is bearing the burden of being such a prominent Sony icon, it’s a shame to see a game such as this suffering niggles that look like they could have been addressed sooner. But if your internet can handle frequent and significant patches (which mine cannot) then patching the game before playing won’t be an issue, and neither will accessing the whole menagerie of content created by other users. Therein lies the hook for the entire franchise; by allowing users to create their own levels, in theory, the game is never ending, as there will always be content to play. It’s always fun seeing what other creative minds outside of the game's design team can come up with.

LittlBigPlanet 3 is a typical sequel; it is more of the same. In many instances, that is not a bad thing as LBP3 still has some appeal and draw to it. The new batch of levels on offer here are some of the best that have been created, with all new mechanics and features being in play. Oddsock, Swoop and Toggle are very welcome additions to the series, with Sackboy’s new arsenal also being impressive, giving him more abilities than before. But even with those, the series feels like it is getting a little long in the tooth now.

The problem with Sackboy is that he isn’t very versatile, and beyond the 2D platform genre, he doesn’t fit very well into any other mould. We’ve had the karting game, but that wasn’t as well received as expected, but there has to be life for Sackboy beyond the platformer. Maybe one day he will see a fully-fledged 3D adventure being thrown his way, but for now, we have to make do with what we’ve got which is more of the same. This year’s game is probably the best of the lot, but with bugs and an air of familiarity about it, it’s not likely to make as much of a splash as it did in previous years.