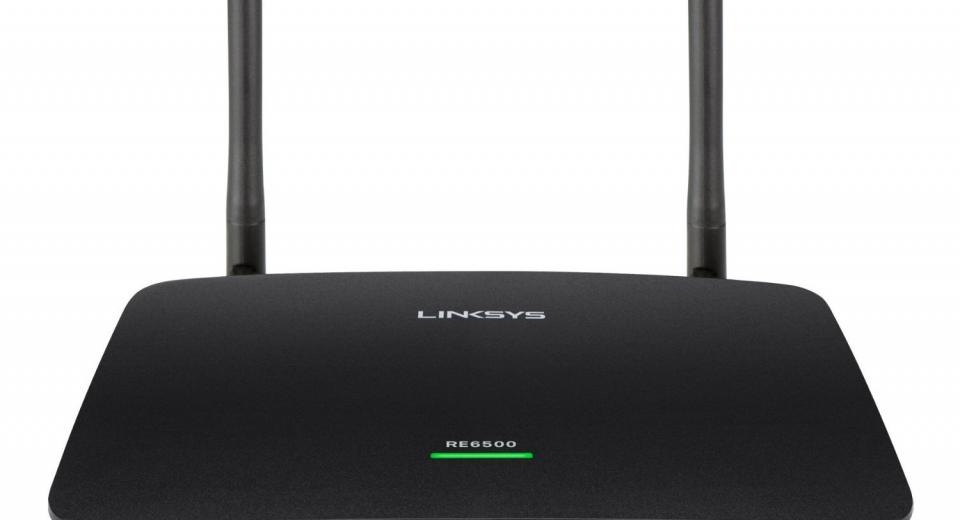 At its heart the RE6500 is a wireless range extender. If like this reviewer your home is built with materials that appear to be designed to suck the life out of any wireless device then products such as Wireless Range Extenders and Powerline Adaptors are almost a necessity to prevent those annoying black spots. Especially with all kinds of devices screaming for network access these days and fast access to boot, especially for the likes of HD streaming.

Purchased by Belkin in March 2013, Linksys remain as a brand on their own and products will continue to be released under the Linksys name. The RE6500 wireless range extender priced at £89.99, includes a whole host of features to improve your wireless signal and network speeds to those dark areas of your home. Things such as wireless AC technology which claims to be up to three times faster than Wireless N devices, simultaneous dual band Wi-Fi, 4 x Gigabit Ethernet ports and also a handy audio jack which allows you to directly connect a pair of speakers for wireless music streaming. Similarly priced to the Netgear EX6200 read on to see how it performs in our tests...

Linksys RE6500 - Design and Connections?

The RE6500 looks very much like you would expect a small wireless device to look. An all matte black finish with two external antenna to the rear along with four Gigabit Ethernet ports, the power switch, audio jack (which uses the standard 3.5mm plug) and the WPS button. It's a simply designed unobtrusive device, with no flashy bells and whistles, just a single white LED light to the top to indicate the extender is ready for use.

It's a fairly small device too with a footprint of just 155mm wide x 140mm deep (including the antenna) and weighs just 168g. It can also be wall mounted thanks to the two mounts on the bottom which is where you will find the reset button. Compared to the Netgear EX6200 we reviewed back in April with its glossy black and red finish, Linksys have definitely gone for the simple approach with the RE6500. One minor issue we have is that the unit itself gets very hot, almost too hot to touch on the underside, so bear that in mind when choosing a location for it. Linksys RE6500 - Setup and Features

As we've come to enjoy with pretty much every networking device we've reviewed over the last couple of years, the installation and setup is as easy as you could ever wish for. This follows suit again with the RE6500 with an install time of barely two minutes and very easy to follow instructions. To install you simply plug it in at a location roughly midway between your router and the area without Wi-Fi, wait for the LED light to stop flashing and then simply connect to the new wireless network that will appear called 'Linksys Extender Setup' from a wireless device such as a tablet or phone. After following the basic instructions that will appear and entering your current wireless password the installation will be complete. There is no configuring of options or anything more difficult than we've described in the setup, it's that easy. With the simultaneous dual band Wi-Fi that transmits on both the 2.4Ghz and 5Ghz frequencies at the same time, there is no confusing options to choose that we saw with our review of the Netgear EX6200. Whichever device you choose will automatically connect to the best available band to maximise the connection. You can of course connect to the device's browser based utility, which offers options to change various settings such as the network names and security mode for example. It also includes a very handy feature called Site Survey. This is basically a list of all the wireless networks detected together with their signal strength and allows you to choose your best wireless access point should several be available. Among other standard options you will also find a simple way of upgrading the device's firmware.

The music streaming feature was also very easy to use and setup. Via iOS we found various free apps such as 'mconnect' for example, which worked very easily and the music played without issue. Via our laptop and Windows Media Player this also worked well, once we had unblocked the Extender in Windows media streaming options of course. Unfortunately we did find that unless a device is directly connected to the Extender, either wired or wireless, the option to stream to it is not available. Our main PC connected to our router could not see the Linksys Extender to stream to it. Our testing is carried out in a standard 4 bed detached house. The router is a BT HomeHub5 (located on the ground floor), connected via Gigabit Ethernet to a PC at one end, then with a laptop via Wireless to the Linksys RE6500 at the other end. We use a simple program called LANSpeedTest by Totusoft which is a basic but powerful tool for measuring Local Area Network (LAN) speeds. It does this by building a file in memory, then transfers it both ways (without the effects of windows file caching) while keeping track of the time, and then does the calculations for you. This simply gives us the results of transferring files from our main PC to the Laptop via the wireless and wired connections.

As you can see from the table of results below, for the wired tests in location 1 we saw a high of 64.26Mbps and a much lower 27.76Mbps in location 2. As for the wireless tests, in location 1 we had a high of 35.19Mbps when using the BT dongle and in location 2 peaks of just 7.21Mbps. For £90 we had expected much higher results than this, particularly given that in our review of the similarly priced Netgear EX6200 it just about smashed all of the results above by a long way. With the test location and conditions identical it's disappointing the Linksys RE6500 gave such low results.

In location 2 when using our current wireless we clearly had no signal at all, but with the extender we had a fairly useable speed of 7.21Mbps. But that still isn't good enough. With the 4 x Gigabit Ethernet ports looking an excellent addition, if all 4 are used at once you are likely to suffer significant speed issues. Due to the way the extender is setup, whereby it clones and extends the existing wireless network using the same SSID rather than creating a new one. We also noticed that unless there was no signal at all, our laptop (and our iPad) would occasionally stubbornly keep to the slower more distant signal of our router rather than jumping to the much stronger signal of the extender. For longer term use we would recommend changing the SSID of the extended networks to make sure the best signal is being used. 
With an SRP of £90 we expected big things of the Linksys RE6500, a fully featured Wireless Extender designed to banish those nasty Wi-Fi black spots. On paper it has an impressive specification and feature list including simultaneous dual band Wi-Fi using Crossband technology, up to N300 and AC867Mbps speeds, 4 x Gigabit Ethernet ports and a connection for audio streaming to conventional speakers. But with our testing we found disappointing speeds across the board.

Starting with the positives, the installation and setup is extremely easy. It takes barely two minutes from initial power on to having an extended wireless signal available. As with conventional routers, the RE6500 extender has an easy to use browser based setup page for changing various options and also Site Survey which gives a snapshot of all the wireless networks detected, allowing you to choose your strongest one if you should have several available. The music streaming feature also worked perfectly, allowing us to stream wirelessly to a pair of standard speakers connected to the 3.5mm jack on the extender.

Moving onto the negatives and these were plentiful with regards to the speeds we received during our tests. Whilst the wired result in one of our test locations showed promise with a high of 64.26Mbps, the wireless tests were fairly disappointing across the board. We did see a high of 35.19Mbps during one wireless test which would be more than enough for streaming from the likes of Netflix for example, but if you have more than one device connected to one of the 4 Gigabit ports you will quickly start to eat that available bandwidth up.

At £90, one of the main competitors is Netgear's EX6200. In our review of that we found speeds that trounced the Linksys RE6500 in every department by a significant margin along with additional features such as the usual Netgear 'Ready' sharing capabilities. Whilst with the Netgear we had concerns that even with the relative high speeds tested it probably wouldn't be good enough for multiple HD streaming for example, this is most definitely the case here with the RE6500. If the price for the Linksys RE6500 was closer to £50 mark than we could possibly excuse a few of the failings, but at £90 it really should do a lot better.