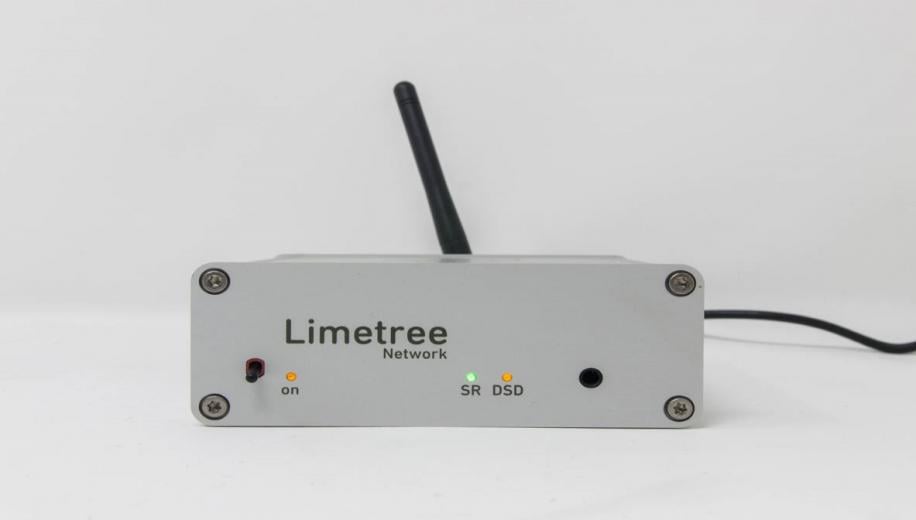 What is the Limetree Network?

The Lindemann Limetree Network is a compact, network audio streamer. It does, in fact, have almost the same dimensions and physical connectivity as the Yamaha WX-AD10, a device which we like very much and is, at the time of writing (September 2019) available for £119. The Lindeman does not cost £119. It does, in fact, cost a more significant £895 which, for a little metal box, might seem a lot.

There are reasons for this though, as we’ll cover. Lindemann is not traditionally in the business of making cheap Hi-Fi. The bulk of their output is many thousands of pounds and meets every description of ‘High End’ you could reasonably expect. The Limetree range of components take Lindemann’s expertise and brings it to a more terrestrial price point. This is being done to celebrate 25 years of trading and as well as the Network, there are a phono stage, headphone amp and a half brother to the Network called The Bridge, which we’ll cover in the review too.

We’re also going to have to cover the issue of whether the Lindemann justifies the cost and why, if you are looking for a network audio streamer, you might feel compelled to seek out a little metal box made in Bavaria over some of the more mainstream offerings on the market. There is a fair amount to unpick here so we best get cracking.

The Limetree Network is a self-contained network audio player that can access material via both a wired and wireless connection. The range of files it can handle is entirely in keeping with what you might expect from a modern network product. This means FLAC, AIFF, WAV and ALAC supported to 384kHz and DSD to 256. There are (of course) devices that can notionally handle a higher rate again than this but this is accompanied by your friendly and regular reminder that the actual amount of material available in these esoteric sample rates is vanishingly small.


This decoded information is made available to a pair of RCA analogue outputs and that’s it. No XLR, no DIN and no digital output. There is a USB connection on the Network but this is principally for people to attach a USB drive to. One intriguing extra function it is capable of though is that if you attach a USB CD-ROM drive; the sort sold as laptop peripherals - it will allow the Network to run as a CD player. There is also a 3.5mm headphone socket that lets it perform as a cut down headphone amp and aptX Bluetooth.


At first, the omission of the digital output seems very peculiar and somewhat parsimonious. There is a reason for it though and that comes down to the Bridge briefly mentioned earlier. If you want digital outputs, Lindemann has made this an either/or process and the Bridge adopts the opposite position of having only optical and coaxial connections attached to the same front end. This means it is similar (but not identical) to the SOtM SMS-200 Neo in that it is a streaming head unit that makes use of a DAC for decoding. It’s not identical though because it has both an interface of its own and it performs processing on the signal. Anything that arrives as a 16/44.1 signal will be output as 24/176.4. If you have a DAC with conventional coaxial inputs, it’s a potentially interesting device.


The Network is also able to perform processing on the incoming signal. In this case, you have the choice of leaving material as is or upsampling to DSD. This is a very of-the-moment feature and will cause a few readers to suddenly be a little more interested in what this little box can do. Before we delve into though, I’d like to make a case to be cautious about the concept before trying to explain why the Lindemann is of interest.

First up, DSD is not magic. It’s simply another way of processing information. Something that sounds terrible in PCM isn’t going to be automatically better in DSD. Furthermore, many of the most capable decoding systems in the market today, Burr Brown, Chord’s bespoke FPGA system and (to an extent) the ESS Sabre are PCM DACs that handle DSD as a secondary discipline. Even if you were to compare them to someone who is effortlessly bilingual, they still prefer to think in one language over the other. The most important thing to state from the outset, therefore, is that the Lindemann doesn’t use these decoders.

Instead, the Network uses hardware from Japanese company AKM (Asahi Kasei Microdevices). AKM DACs work perfectly happily with PCM but are more orientated toward DSD operation. The Network has a pair of 4452 DACs in dual mono which sit behind a dedicated 4137 resampler. This isn’t DSD upsampling done because it’s a tick box option on the DAC, it’s DSD upsampling done with some of the very best hardware available for the task. Further to this, everything is controlled via a bespoke clock borrowed from the more expensive Lindemann products.


This means that this tiny metal box packs some seriously impressive decoding hardware - arguably the best off the shelf kit there is right now. Furthermore, it is combined with an interface that is a bit of a surprise too. The Lindemann uses its own platform and app and it has to be said, it’s a rather good one too. It is stable and easy to use and also had support for TIDAL, Qobuz, High Res Audio, Spotify and Deezer. Then, because Lindemann isn’t a fool, you can control it via Roon too as it is fully Roon compatible.

The downside, of course, is that to do all this and build it in Germany, the Lindemann is a little metal box. Spend a bit of time with the Limetree though and this becomes less of a bind than you might think. To explain why, we must turn to internet meme factory and general hotbed of skiving at work, Reddit. Buried among the countless subreddits is one (well subscribed) example called Oddly Satisfying. This contains countless images and videos that are, well, oddly satisfying. So it is with the Lindemann. Take the power switch, It’s not a button but is instead a tiny toggle control. Flick it up and the Network blinks into life, giving a little bit of ceremony to the process. The other two LEDs show the incoming sample rate and whether you have the DSD upsampling engaged. It’s simple but does show you what is happening. The Network feels like a cross between an escaped piece of lab equipment and the sort of mystery box that festoons professional IT networks but for all that, I really, really like it.

Naturally, there are limits to how smart a little metal box can be (although, the Network is very well made) and the standard criticisms about a lack of hard controls apply (although they are easier to stomach here than at the higher prices we’ve seen some devices that are simply head units) Spend some time with the Network and the £ to g ratio becomes a little easier to understand and really, the only thing I’m not thrilled by is the rather short cord on the ‘medical grade’ wall wart PSU. By the same token, if your rack is looking a little busy, the Network is going to be easier to accommodate than a full size rival.

How was the Network tested?

The Network has been used mainly running off an IsoTek Evo 3 Aquarius mains conditioner and running into a Naim Supernait 3 integrated amp. It has been used wired from a Melco N1A NAS and wirelessly as a Roon endpoint from both an Innuous Zenith Mk3 and a Lenovo T530 ThinkPad. Speakers used have included the Amphion Helium 3, Bowers & Wilkins 805D3, Focal Kanta No1 and Acoustic Energy AE1 Classic. Material use has included FLAC, AIFF, ALAC and some DSD, Qobuz and Deezer.

Initial listening starts with the Network running bit perfect. This means that the 4137 resampler is inactive and the AKM DACs are running with the PCM signal that is being given them. This is technically using the Lindemann without access to its party piece but the performance is still rather encouraging. For a few of you reading this the business of turning ones and zeroes into an analogue wave has little to no nuance - hit some benchmarks and you’re good. The Lindemann is a demonstration that while the differences between ‘good affordable’ and ‘good premium’ aren’t huge, they are there. This can be down to myriad details - filters, not relying on the output device of the DAC itself and, in this particular case, using two DACs (so that each DAC gets to process a single channel and sum it against the other channel of each DAC running the inverted signal) all contribute to incremental gains.


What does this translate to? Listening to the mighty Visual Audio Sensory Theatre by VAST, the Lindemann makes this album work. It’s a massive, jumbled torrent of sound, sometimes every bit as aggressive as Nine Inch Nails, at others, Zero7 levels of calm. The Lindemann makes all of it sound right and more importantly, sound good. The step change from the strings and guitar of Flames to the facemelting ‘music to oversteer to’ of Temptation is usually almost painfully discordant - what works for one track isn’t usually right for the other. The Lindemann nails both.

Engage the DSD upsampling and things change again. First up, the changes aren’t ‘night or day’ or ‘my wife was in the kitchen and even she heard the difference’ (admittedly, I’d need a wife for that) but they are present and the Lindemann is one of the few devices that genuinely does achieve some of the ideals that DSD is capable of. This is demonstrated in the fairly unlikely environment of Slam by Pendulum. Without losing the bass, the ferocity and (most importantly) the fun, the Lindemann manages to reduce the feeling of compression and congestion. Everything is more spacious and easier on the ear.


Of course, if you actually give it something with real instruments, this situation only improves. The staggering, almost ‘folk prog’ of Familiarity by the Punch Brothers is a superb demonstration of just what the Network is really capable of. There is no sense of anything like processing taking place; the music simply flows in a way that even some more expensive devices cannot replicate. It forgives less than stellar material while allowing brilliantly mastered stuff to shine and unlike some DSD implementations I’ve spent time with, it avoids that slightly syrupy quality that can creep in. Listening to I don’t care by The Roots, it’s still light on its feet, aggressive and funky. It’s only when you switch back to something else you realise that the Network has worked its magic on the material in question.


Everything is more spacious and easier on the ear

The Lindemann is - and forever will be - a little metal box. Even compared to something like the Chord Qutest, it is never going to ‘feel’ the same as some alternatives and compared to a truly great control app, the Lindemann one is only pretty good (although you can, of course, ignore it and go full Roon if you wish). Lindemann is not exactly a household brand either.

The reason why you might want to seek this little streamer out though is because it is outstandingly good - as it stands it's the best self-contained, sub £1,000 streamer I have tested. It’s simply incredibly easy to listen to for long periods and it does this while being pleasant to use and taking up very little space. The Limetree network is one of the most outstanding products I have tested this year and it is one that without a moment’s hesitation, comes Highly Recommended.