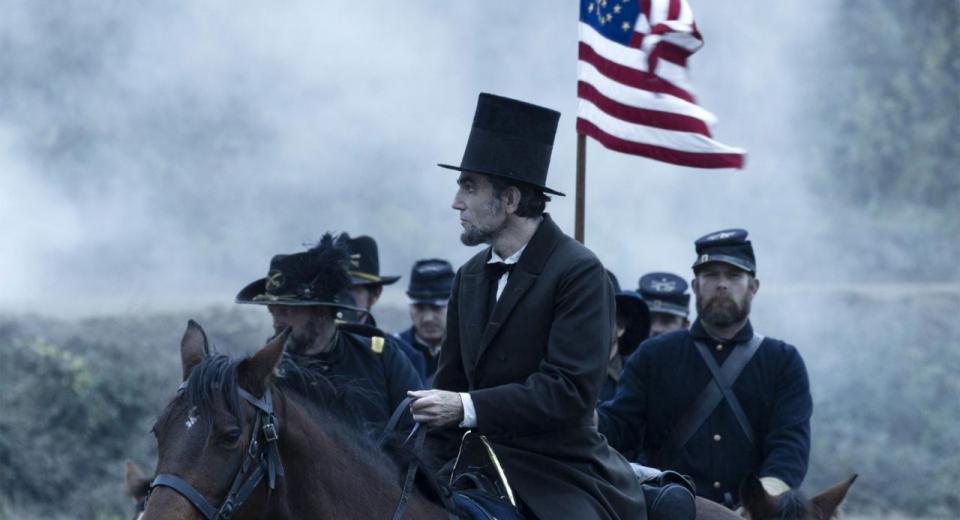 Steven Spielberg has always been something of a humanist in his film making. Setting aside the blockbusters of ET, Raiders of the Lost Ark and of course, Jaws, we also have Amistad, Saving Private Ryan and Schindler’s List. Lincoln falls firmly into the second category, being something of an historical biopic, concentrating on the abolishment of slavery during the American Civil War. Just a word of warning though, this film is littered with historical inaccuracies, so should not be relied upon to provide absolute facts about everything that happened during the turbulent four months leading up to the end of President Lincoln’s term of office.

It should be remembered that the Civil War was as much about economic pressures as as any political power struggle. The Southern States relied upon black slave labour to bolster their fragile agricultural economy, while the richer Northern states considered themselves closer to civilised western Europe and saw slavery as a barrier to acceptance into the great trading powers. There can be no doubt that Abraham Lincoln did more to end slavery than any other American. Before the 13th Amendment (the key to making slaves free men by abolishing the right to consider people as property) Lincoln had already freed many slaves under the Emancipation Act, but their freedom was not guaranteed after the end of the civil war. It is quite chilling when you think that just 150 years ago, a civilised country could still have four million slaves and bonded “unfree” persons and it was only in 1995 that the final state actually ratified the amendment, although to all intends and purposes, slavery had ended by 1870.

Daniel Day-Lewis quite rightly won both a Golden Globe and Oscar for his portrayal of the aging president while the supporting cast including Sally Field as the First Lady and Tommy Lee Jones as Republican Congressman and fervent anti-slave campaigner Thaddeus Stevens both received nominations for Academy Awards as well. Day-Lewis is known as a character actor and really did become Lincoln for the duration of the filming of the project. If I have a criticism, it would be that he is almost too familiar in the role, failing to create that invisible barrier that leaders and politicians seem to radiate around them. I feel that even in the informal atmosphere then prevailing, that a president would not be so unassuming and approachable. The utter exhaustion of a man faced with reuniting a split and scarred country is however, brilliantly communicated.

The cast is actually pretty huge, but as it is split across different areas of action, it remains quite easy to recognise who is who. There are a number of discrete locations, with only a few characters moving out of their geographical area. The White House is the territory of the First Lady and she rules it with an iron fist, keeping servants and her surviving children rigidly in line, despite the more relaxed nature of her husband. Most of the political wrangling takes place in and around the House of Representatives. It is here that alliances both within Abraham’s Republican Party and also a little further afield are cemented. Unlike normal political bills, an amendment to the American Constitution requires a two thirds majority and Lincoln did not have this. His agents therefore must seek to improve his chances of getting the amendment passed by offering what today we would consider bribes to undecided members of the house.

Set against this backdrop is the senseless destruction of men and property of the civil war. While the politicians negotiated and argued, their fellow countrymen continued to slaughter one another and destroy anything they could not use for themselves. Following the death of one if their children years earlier, the Lincolns' are not keen for any more of their children to join the fight, but both young Tad and law student Robert want to join the cause and it is only President Lincoln’s veto that delays Robert’s entry into the fray.

It is not much of a spoiler to say that the 13th Amendment made it into the constitution or that Lincoln was killed during a visit to the theatre just a few days after accepting the surrender of the Confederate commanders. The majority of this movie surrounds the build-up to these momentous events and does so without resorting to sensationalism or moving too far from the truth and therein, at least for me, lays the problem. This film fails to excite or enthral me. Maybe my lack of interest in the American Civil War or early
American politics is to blame, but I found the pace of the movie to be extremely ponderous and it failed to ignite any passion for the subject in the way that both Schindler’s List and Amistad managed. The various time compressions and more importantly, historical inaccuracies (or at least, so I am led to believe) rob this film of some if its authentic credentials, leaving basically a very slow moving, albeit beautifully made political thriller with little or meaning outside of America.