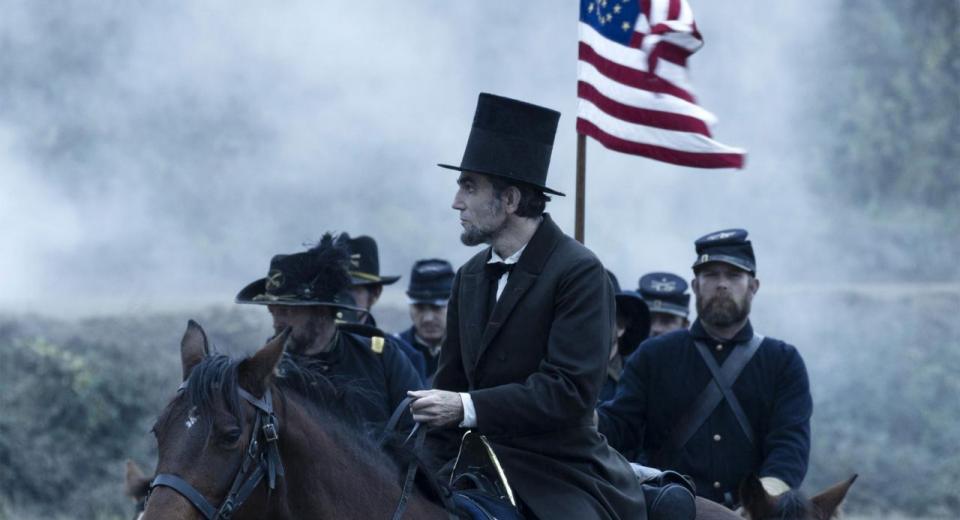 Originated on 35mm, Spielberg continues to prefer film over digital and proves that the format is not quite dead, yet. What you seem to gain from film is similar to the analogue over digital audio debate. Without doubt, some of the crispness and ultimate resolution is missing, but the trade-off is that the inherent softness helps to slightly mute the picture, making it easier to watch. I suppose a better analogy would be the comparison between a lifelike painting and a photo. Both provide an accurate and encompassing picture, the method of communication is subtly different.

The 24fps AVC-MPEG 2.35:1 transfer is very good, but the black level does appear somewhat crushed at times. This is a shame, as the black coats and stove-pipe hats tend to lack the level of detail that digital can provide. The colour palette and colourising is set towards to the cold side, with pale skin tones and earthy, dirty colours. Exterior shots show plenty of detail, with the autumn and winter scenes feeling absolutely spot on.

The art of the cinematographer is shown to good effect with very few shots suggesting that negatives have been “pushed” to recover under exposure and little in the way of burning out to suggest over exposure. The result of this is good contrast and brightness control – notwithstanding the lack of black detail. The actual framing of shots, along with flawless focus and panning gives this movie the solidity and quality that major blockbusters require. Film grain is never intrusive and in some ways adds to the overall picture.

The few battle scenes are quite muted – no doubt due the film’s 12 age rating, but realism is seemingly maintained. Many other scenes take place in twilight, and again, this tricky light level is handled well.

This measured pace of this film and almost exclusively tripod and crane mounted shots keeps any motion artefacts at bay, and there is nothing to suggest any edge enhancement. CGI is very limited and subtle in its application, but this has led to a few historical inaccuracies, with details like busts of future leaders visible in the backgrounds of shots where they could have been quite easily masked and expunged.

There is nothing here to offend, but the lack of black level detail and the occasional softness detracts from the total score. A special mention however, for the superb cinematography, making the film engaging and pleasurable to watch. The DTS-HD MA 7.1 stream is not the most expansive or dynamic out there, but bearing in mind the pace and content of the film, there is little need for it to be. Where required, the various channels come to the fore, providing a sonic back drop to the more hard hitting scenes. The vocals are generally clear, although I did struggle with a few words here and there. This may have more to do with the thick Yankee accents than to any defect in the sound design though.

Low frequency energy is restricted to occasional orchestral swells on the whole, requiring decent system integration to keep this sounding natural. The 7.1 soundtrack could easily have been a 5.1 as little is gained from the extra channels. There is a level of spaciousness and atmosphere created, leaving plenty of room for John William’s soundtrack, but for us mere mortals with just six speakers, we are really not missing out.

The score is typically Williams, with anthemic and uplifting orchestral numbers dovetailing seamlessly into period American folk songs. The main theme however reminded me to a certain extent of Apollo 13 – Written by James Horner. They share similar orchestration and cadences, despite the somewhat different movie content! The folk songs sound very authentic to me, pulling on popular melodies of the day.

You would not use this soundtrack as a reference piece to show off the limits of your system, but it does form an excellent accompaniment to the movie. The disc is nice and quick to load, taking you straight to the main menu. In addition to the normal language setup and chapter markers, we get access to the admittedly limited extras. What is essentially an extended look behind the scenes is split up into more digestible chunks. All feature sections of an extended interview with Spielberg, along with contributions from cast and crew, as well as experts in the field, clips of the film and behind the scenes footage.

Rather like the rest of the movie, the extras feel quite ponderous in pace, but extremely well made all the same. Probably of more interest to students of American history than anything else to be honest though. Spielberg has produced another epic here, but it will not be to everyone’s taste and does not get the same “Must See” tag as some of his other works. There is no denying that the American Civil War and the 13th Amendment were extremely important in freeing slaves from emancipation, but the treatment here is painfully slow at times and despite the sterling performances of the cast, it just failed to engage me.

Technically, it approaches the zenith of what can be achieved on 35mm, with low film grain, excellent stability and extremely watchable picture. The problem is that digital now exceeds the quality achievable with conventional film in terms of low level detail, exposure latitude and sharpness. The sound track is quite laid back, but hits when it needs to and does not offend. I was disappointed with this movie, but maybe this is with myself for not really getting under the skin of it.