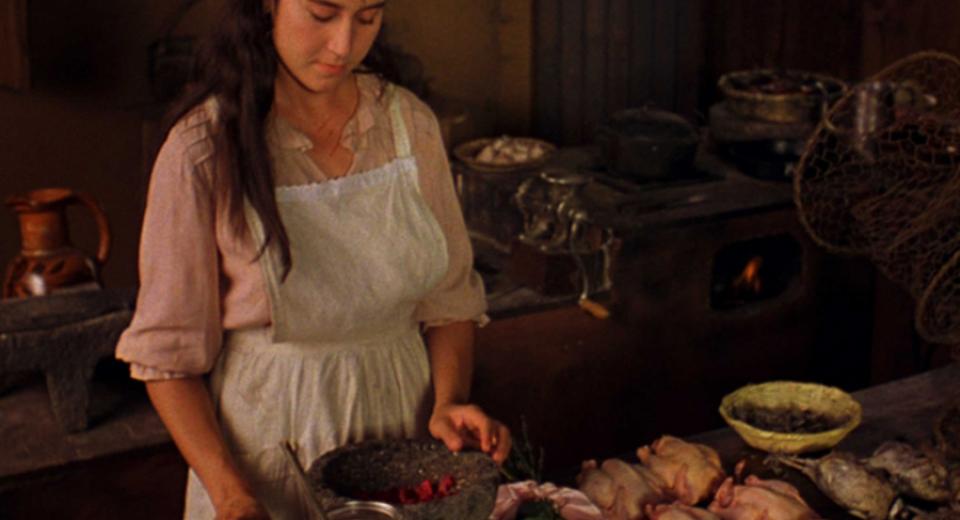 Over the last decade, Mexican film-makers like Alfonso Cuarón, Guillermo del Toro and Alejandro González Iñárritu have garnered global accolades for a slew of commercially victorious movies in English.

But when Alfonso Arau's Like Water For Chocolate was released in 1992, the Mexican wave proper was yet to break, and the actor-turned-director stuck to squarely Mexican material by adapting his ex-wife and first-time author Laura Esquivel's eponymous hit novel (cosily subtitled 'A Novel in Monthly Installments with Recipes, Romances and Home Remedies'). The title refers to a Mexican expression 'como agua para chocolate' describing the correct water temperature for (hot) chocolate; a simile for either passion or anger - or both.
Genre-wise, it could be broadly summed-up as a 'magic-realist romantic drama' - magic-realism being the notably Latin American literary genre in which the absurd and surreal is accepted and incorporated into rational everyday scenarios. In this film, food acts as both a magical catalyst and a symbol for characters' actions and feelings. Viewers will be reminded of foodie films such as the superior Danish Babette's Feast and the fluffy Chocolat. The plot, such as it is, centres around illicit lovers Tita and Pedro on a Rio Grande ranch at the dawn of the Mexican Revolution. Food-loving Tita (Lumi Cavazos) is forbidden by her cold and cruel mother from marrying her girlhood crush Pedro (smouldering Italian Marco Leonardi from Cinema Paradiso), due to the Mexican tradition of the youngest daughter eschewing marriage for lifelong care of the mother.


The film is a forerunner of the cinematic Mexican revolution currently taking hold in Hollywood.

Like Water For Chocolate skims over potentially profound themes: the social commentary on Tita's rich white European-descended family and their dark-skinned native Mexican servants; the miserable lot of a woman in a macho culture; and the revolution itself. But the film's chief interest is as a forerunner to the current cinematic Mexican revolution in Hollywood (in fact cinematographer Emmanuel Lubezki won an Academy Award for Birdman this year and for Gravity last year). At it's heart though, it's a period-piece chick flick en español.


You can buy Like Water for Chocolate Blu-ray Here