From out of nowhere 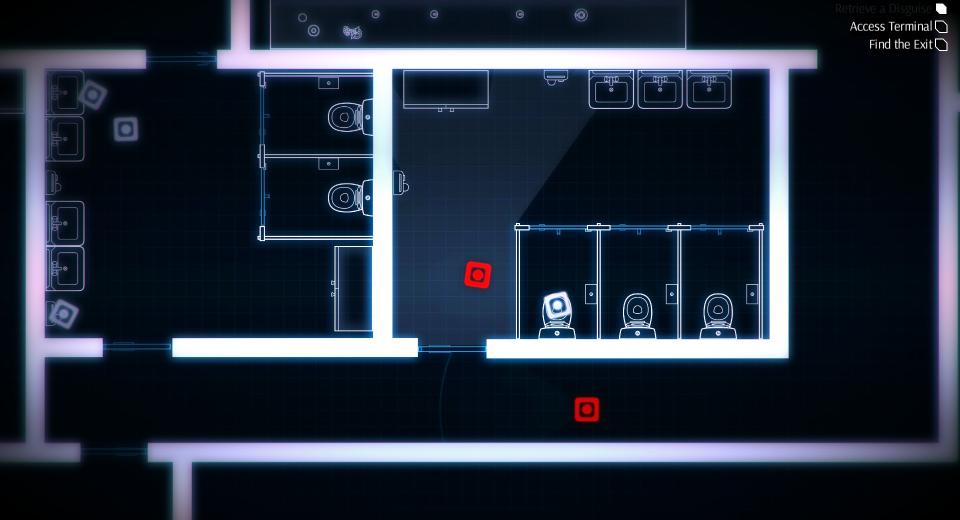 Remember when everybody thought stealth mechanics were rubbish? When every AAA game included a sneaky section on the back of Metal Gear Solid, progressively bludgeoning the concept to death with shoddy controls and poor pacing? Thankfully that’s all behind us. The likes of Ground Zeroes and Monaco have given fresh impetus to the genre within the last year, while the upcoming Volume is turning heads with a compelling sense of style and relentless media focus on BAFTA-winning creator Mike Bithell.

If you’re searching for a quick fix in the interim however, this week sees the release of Team 17 development offshoot Just a Pixel’s LIGHT: a minimalist game that distils sneaking, disguises and murder mechanics into a series of neon squares, lines and grungy electronica. Think Thomas Was Alone mixed with Geometry Wars, Hitman and Pac Man, framed with a smattering of text logs and dialogue boxes. The setup, such as it is, casts your character as a mysterious test subject waking up in a shadowy building with no idea as to how they came to be (SPOT THE VIDEOGAME PLOT). You might have already guessed the rest, but LIGHT’s series of twelve levels slowly dole out back-story and information about both the mystery protagonist and his oppressors, reaching for the usual conspiracy theory plot points as they go.

In order to unlock those tidbits of story you’ll need to guide the test subject’s block-based form stealthily through facility corridors, car parks and airports, avoiding security cameras, guards and conflict wherever possible. You kill enemies and civilians at your own risk, with swift penalties doled out on the discovery of any corpse, and annoyingly-fast backup officers on timed deployment for those that go missing.

Hacking a hard-to-reach computer terminal or recovering information is usually the key for progress, nullifying cameras and security doors that inevitably lead to other terminals, backtracking through populated areas and eventually unlocking the door to the exit. At times, there’s a good risk-reward balance at the core of LIGHT’s simple shell. Although each of the levels can be completed swiftly once you know the best path and the rhythm of guard patrols, it’s not always the case that a clean solution is best. Sure, you can wait for that camera to swing slowly around before quickly darting into the room behind, but if you’ve already taken the uniform from a recently-deceased guard, that same camera can only see half as far, making progress through unmanned areas a positive breeze.

But then progress needs be swift once you stuff that first body into a cupboard, because you can bet your ass that backup is on its way. Killing a guard automatically triggers a two-minute timer for replacement officers, and even if you manage to run away from a chasing foe (which is either incredibly tricky or ridiculously easy depending on what sort of mood the AI is in), the remaining guards now run at high-speed, randomly searching the level for your presence. Given that almost every stage can be completed in two minutes or less, that’s usually a good indicator for a restart. The spartan ethos behind LIGHT’s neon-tinged top-down visual style transfers directly to the control scheme, meaning this is a game that can literally be played with one hand. WASD guides your block around the screen, with a good sense of momentum adding a touch of finesse to general movement. The only other interaction comes in the form of context-sensitive button taps to kill, interact, hack, or drag and hide bodies.

The visual language is always clear and precise, with the titular LIGHT referring to ever-present vision cones radiating out from the protagonist, the captors and their security cameras. Everything in the world is ray-traced as they shift around the environment, and since your illumination is the only thing that matters, there are no fuzzy detection variables to deal with at all. If you hide behind a plant pot you can see the precise angle at which a guard will need to turn in order for you to be discovered, leaving no doubt as to who was at fault if you’re suddenly in a chase. Unfortunately, as enjoyable as some of that moment-to-moment gameplay is, LIGHT doesn't pull together into a particularly compelling experience. The gameplay systems are functional and work individually, but the level design and objectives never really exploit their potential beyond the absolute basics. You've seen pretty much everything there is to offer around 5-6 stages into the game, and the latter half is the same procession of hiding, tapping keys to unlock and then repeating until the final door swings wide, with slightly more facilities to work through.

And as this is an incredibly short game, that fatigue is less than welcome. LIGHT’s plot is mildly entertaining but incredibly threadbare, and despite Thomas Was Alone managing to convince that a series of blocks can indeed hold emotional resonance, there’s absolutely nothing similar on show in LIGHT’s cast of geometric characters.

Although I’d be hesitant to say I didn't enjoy LIGHT’s brief one-hour running time, I can’t help but feel more could be done with the premise. The story doesn't amount to much, and even if you discard those nuggets of information scattered around each stage, the level design never really coerces its stealthy sneaking into an interesting whole.

Regardless, there are good things on display here. The visuals are clean and precise; the shadow-casting from objects and characters leave no room for error on detection states, the music is excellent, the tension is occasionally high. But LIGHT’s charms are over far too quickly, and somehow manage to run out of steam even halfway through that incredibly short duration.

If you absolutely need a stealth action title to tide you over until the big-hitters, then LIGHT is an option that probably comes with too many caveats for most. If you take the plunge, just expect it to fade. Quickly.