It's only bleedin' Lifeforce, innit? 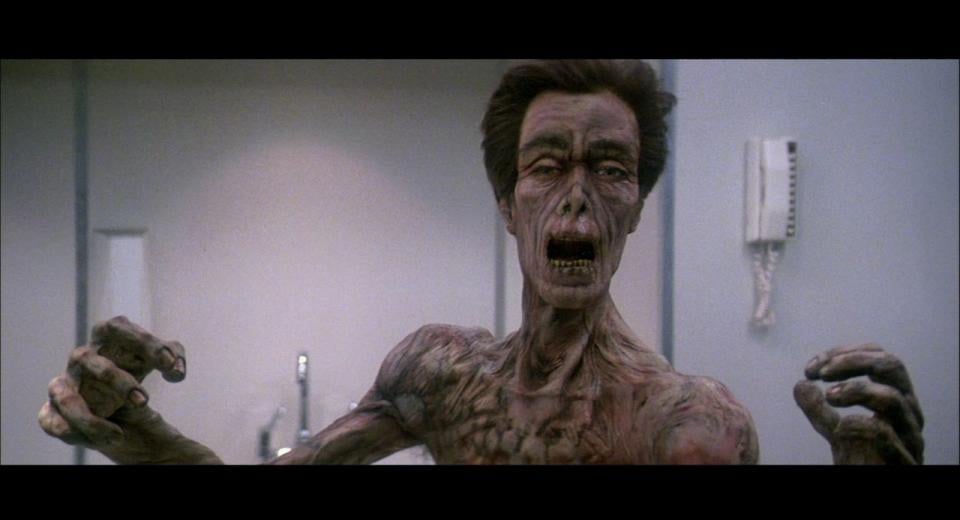 Much like Ridley Scott’s Legend, when the film was hacked-about for its US theatrical cut, the score and the resulting sound-mix was messed with and altered. With Henry Mancini unable to return to rescore the jumbled scenes, the task fell to Michael Kamen to conduct aural surgery and patch over the seams. As I have already discussed, this played merry hell with the tone and style of the musical cavalcade of the film … but, also like Legend (in which Jerry Goldsmith’s wonderful score was entirely dropped in US prints in favour of a purely synthesised one from Tangerine Dream), American audiences took to the shorter cut of the film and seem to embrace it far more than the full version.
The International cut offers a choice of two audio tracks – a 5.1 and a 2.0 option, both in DTS-HD MA. I stuck with the surround mix, and I loved it. Mancini’s score, the sound FX and the various tonalities that drifted in from Michael Kamen all have weight, distinction and spread. The spatial qualities and the depth to the really quite audacious soundtrack provide excellent coverage, filling the room and reaching out to encompass the full set-up frequently.
Dialogue is clear at all times, although it is understandably mixed a little lower than the surrounding action and does come across as slightly dated. But the effects and the directionality are highly engaging. A knock on the door emanates from somewhere off to the side. Sudden shock appearances – the vampire girl zooming in to Carlsen as he dreams, windows blowing out behind two Paras, a vampire transforming into his original bat-monster form – are delivered with gusto. Patrick Stewart’s infernal screaming is also belted out with quite some intensity. Surround use is more than decent. Listen to the voices and screams of the inmates in a mental asylum realistically echoing around the speakers. Don’t go in expecting whip-around dynamics and split diagonal chutzpah, though. The film doesn’t rely upon such finite precision. But the track has both power and movement. The rears deliver the goods when it matters, the stereo spread is wide, and the listening environment is highly charged with activity and resonance.
I am very pleased with the bass level too. Whilst this is hardly going to worry the neighbours, nor satisfy the bombastic-junkie that resides within us all, the low levels add a terrific amount of atmospheric intensity that comes across very well. There are moments of weird alien thrumming on the soundtrack – some of it from the score, itself, and some from the wacky things taking place onscreen – and these hover and reverberate quite splendidly. The opening of the International Cut boasts Mancini’s rousing main theme, unlike the Theatrical, and this really sets the tone for what will follow. As the actual title Lifeforce surges towards us, Superman-style, there is a glorious whooshing as the word travels past us that filters through in the rears. When someone is having their essence drained out of them, the audio effects yawn out to encompass you, very definitely adding to the experience.
The exploding bodies – and we get a vigorous succession of these during one section in which we witness three such extravagant demises – sound tremendous. The ones that erupt in a shower of dust have a deep boom, the ones that evaporate into sparks and light during the “harvesting” of London have a satisfying thwupp! I love the brittle crackling as Fallada pokes a hole in the dried-up husk that used to be a guard – and this comes across with quite impressive detail. And listen to the spent bullet casing that rattles around on the floor over to the right. Good stuff.
For the record, the US Theatrical Cut has a DD 5.1 mix with some reported problems. I can neither confirm nor refute these allegations as I really do not have much interest in that version of the film. Scream Factory rustle-up some fine supplements to get the old lifeforce energized. It all comes elaborately packaged with a DVD copy and boasting new artwork on one side of a reversible sleeve and the original poster art (well, one of many variations) on the other.
There is the US Theatrical Cut – the version butchered by the studio to keep it under two hours and hopefully appeal more to the punters. It didn’t and the box office, Stateside, barely noticed its existence. This version is here … but I’m not a fan of it and haven’t yet bothered with it.
We have two terrific commentaries. The first with Tobe Hooper, the man who clearly threw everything, including the kitchen-sink, into his wacky SF/horror/fantasy crash-test. And the second with Nick Maley, the man responsible for the make-up FX. Hooper is joined by Tim Sullivan, who is clearly as smitten with the movie as are most of us too, and the whole deal is fun and entertaining, but the legendary filmmaker does tend to ramble and meander off course quite a lot. The second track with makeup-man Nick Maley is both more spontaneous and technical. He has good recollection of his time spent on the production and plenty of anecdotes.
The dreamily delightful Mathilda May returns for a quick chat about her bold and audacious genre debut in Dangerous Beauty, and naturally addresses her copious nudity in the role of the space-bitch. Still highly desirable, she exhibits a good sense of humour and a degree of fondness for this quirky SF rollercoaster.
Steve Railsback also gets a chance to reminisce about being a space vampire’s plaything and how appearing as Charles Manson could have blighted his career path in Carlsen’s Curse.
There is a vintage making-of and a brief retrospective with Tobe Hooper, who looks back at the film’s elaborate fun and games in Space Vampires in London.
Rounding things off we have a TV Spot, Theatrical Trailers and a Stills Gallery.
Overall, this is a good selection … but I would have liked more, actually. Space vampires on the loose, London overrun by snarling zombies, renowned English thespians spouting more pseudo-scientific baloney than you can shake a leaded stake at, Halley’s Comet spewing gorgeous green fog across the cosmos, and Mathilda May swanning around in the altogether as an intergalactic femme fatale who just wants somebody to love … it’s impossible not to become completely smitten by Tobe Hooper’s deliriously daft Lifeforce.
The story is ripe bunkum that doesn't know which way to turn, and the screenplay is crammed with howlers, but this is justly celebrated as extravagant trash and is endlessly rewatchable. Henry Mancini played a blinder with one of the most lushly strident main themes in the genre, and the FX are splendidly silly yet eminently fascinating. SF, Horror and Fantasy collide in the Quatermass chiller that Hammer never made and, as ludicrous as it all is, the whole lurid shebang rattles along at a pell-mell pace and plays helter-skelter with far too many ideas for one film to possibly keep hold of.
Despite a couple of issues, Scream’s transfer is certainly the best that the film has ever looked on home video, although I will be very interested to see what Arrow are able to do with it. The audio is surprisingly effective here and really adds some pizzazz to the whole crazy enterprise. You’ve got two versions of the film, but the US Theatrical cut is best treated as simply a special feature, as it really is inferior, both in narrative terms and in AV quality. The extras, elsewhere, are a fine bunch, even if the glutton in me would have liked a lot more.
Overall, Lifeforce has a lot more to offer than merely Mathilda May’s ample charms, and it’s certainly the best sexy alien vampire invasion of London that we’ve had. For those with multi-region capabilities I would still suggest waiting until Arrow’s UK release has been unleashed to see what they can offer. For me, personally, I can’t have too much of Hooper’s hysterical horror hybrid … so I will be checking out Arrow’s Blighty-based cousin to this package from Scream Factory as well ... and reporting back in due course.