A truly epic movie, set to become a classic and in 3D, reference quality material. 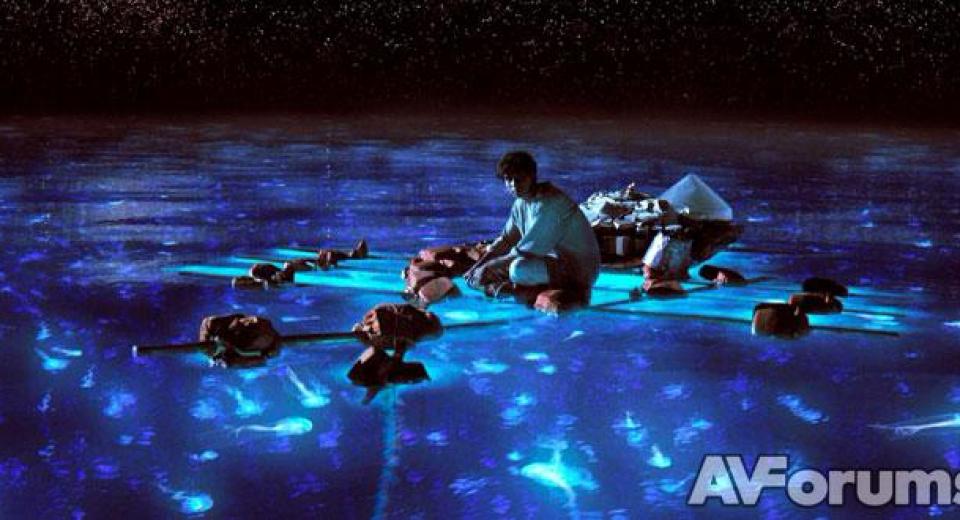 Every so often, a film comes along that stops you in your tracks. It is usually a spark of originality or some other quirkiness that first catches the eye, but it needs impeccable direction and production to really make an impact. Director Ang Lee has the ability to spot these potential cinematic gems and imbues them with the talent they need to succeed. Life of Pi was a movie many said would never be made. It was not considered mainstream, was going to require huge investment in CGI and practical locations and had limited potential for spin offs and sequels. Add into the mix the wish to make this in frontier pushing 3D and you can understand why the studios were a bit nervous about the whole project. The good news was that Lee had made very few poorly performing movies and 20th Century Fox were willing to take the risk.

The enigmatic title gives little away, but a glance at the front cover of disc – or for that matter much of the publicity material starts to give some clue. Piscine Molitor Patel - or Pi for short, is an Indian boy who was brought up in a small private zoo, surrounded by tigers, hyenas, zebras and apes. Named by a slightly eccentric uncle after a swimming pool in France, Pi adopts his shorter Monika to avoid being called Pissing by his fellow schoolboys. As he grows up, he shows an interest in God, not just a specific religion, but the Almighty in general. He describes himself as a Catholic Hindu – guilt and confession in the sight of thousands of gods! He also has an interest in Islam as well, making his food choices somewhat tricky. His father decides to sell the zoo and emigrate with the animals to Canada, but during the crossing, the cargo ship founders in a storm and Pi finds himself the only human survivor.

As the storm rages around him, Pi finds himself adrift on a lifeboat, with a few of the zoo animals there to keep him company. The storm and ship wrecking are as powerful as you could possibly want, but maybe do not feel as real as some other movies manage. The narrative telling of the story is through flash back and narration by an older Pi, now settled in Canada. He is visited by a writer, who has been told of the story while visiting India and has tracked him down to hear the account for himself. Pi recounts his ordeal, starting from his early life, religious awakening and also the fateful voyage. From early on, you get the feeling that everything is not as black and white as Pi is making out and that his tale may not be entirely truthful.

You cannot consider this to be an all-star cast, just a troupe of really good performers. Suraj Sharma as young Pi makes his movie debut, plucked from obscurity to this massive role. He does an excellent job, although the characterisation is not rock solid and occasionally unconvincing. Rafe Spall, the handsome young product of Tim Spall’s loins is of course much better known and here, he plays an excellent supporting role as the writer in search of an original story. Older Pi is played by veteran Bollywood Irrfan Khan. He has had a number of western studio rolls as well, so enjoys a good reputation around the world. The rest of the cast simply do a sterling job in support of the core characters throughout the movie. As for the animals, they are almost entirely CGI creations, but you would be hard pressed to tell where reality ends, as the animation is absolutely top notch. Rhythm and Hues – the CGI lead studio have done a fantastic job, a shame then the film all but sent them under, despite them winning a Oscar.

Back to the plot. Pi and Richard Parker – the tiger (long story) find themselves marooned on the life boat, with an orang-utan, hyena and an injured zebra. No other humans have survived the storm and subsequent sinking of the ship, so it is a strange life boat crew indeed, if Pi is to be believed. Very soon the carnivores and herbivores sort out the food chain and only Pi and the tiger are left. Over 200 days adrift in the Pacific with just a hungry tiger for company requires some serious improvisation, not to mention luck. A floating, flesh eating island populated my meerkats provides a source of food for both of the shipwrecked mariners, while Pi’s ingenuity supplies them with fresh water and enough shade to keep them alive. Eventually, the boat hits dry land, Richard Parker heads off into the forest without a second glance and Pi is rescued by the locals. What I have done in this short paragraph is broadly explain about a third of the movie. This is deliberate, as it is also the key section of the film, smattered with humour and deeper moments.

But is this the true story? Pi provides an alternative version when questioned by the shipping company’s insurance assessors, who cannot accept his fantastic tale. This truly is a thought provoking movie, tinged with comedy and of course, sadness. There is much more going on than I am giving away in this review and the true meaning is there for you to unearth. Pi claims that one can find God through his tale, what will you find?