The feelings the film instils in you, bring you back for more. 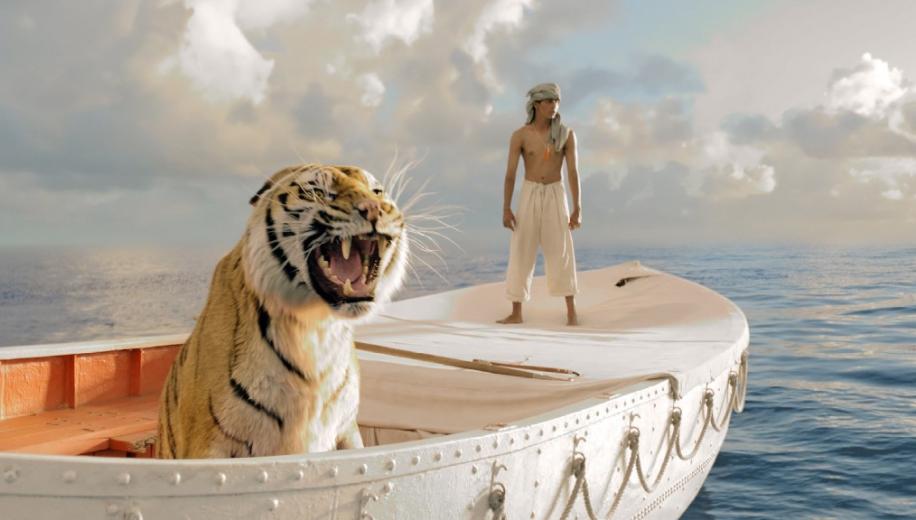 I suppose in the end, the whole of life becomes an act of letting go, but what always hurts the most is not taking a moment to say goodbye.

Visually stunning. Incredibly life-like effects. Photo-realistic. Just some of the praise levelled at Life of Pi, a 2012 film directed by Ang Lee. Whilst such praise is, indeed, warranted, to reduce what is a beautiful picture to sound-bites is to do it an injustice. Based on the book of the same name Life of Pi is, at its heart, a story of love and acceptance, not survival. And when told by one of the greatest visual and lyrical artist in the medium, the result is something very special indeed – an award-winning opus that might just, to quote the film, “make you believe in God”.
The story of how a boy managed to survive nearly 8 months on a life boat after his ship capsized costing him everything and everyone he knows with only a Bengal tiger called Richard Parker as company is the stuff of dreams (or nightmares), but is told with such conviction and such realism that you are drawn into the world without a care. So much so that the ‘real’ story becomes unbelievable when you are asked to choose. All the sound-bites ring true for the opulence of the picture, but it is the feelings that the film instils that bring you back for more. Life of Pi was shot digitally using an Arri Alexa camera at 2.8K resolution and was finished using a 2K Digital Intermediate which presumably formed the basis for this Ultra HD Blu-ray release. The film was upscaled to 3840 x 2160p and presented as widescreen 1.85:1 aspect ratio (in the main, though 1.33 and 2.35:1 are also briefly used). The disc uses 10-bit video depth, a Wider Colour Gamut (WCG) and High Dynamic Range (HDR), and is encoded using the HEVC (H.265) codec. We reviewed the Region free UK Ultra HD Blu-ray release of Life of Pi on a Panasonic 65DX902B Ultra HD 4K TV with a Samsung UBD-K8500 Ultra HD Blu-ray player.

Something of a peculiarity, Life of Pi was conceived, designed and made to be seen in 3D, when 3D was the next big thing, and the original release proved to be a reference disc in this regard, with the standard 2D Blu-ray being equally as impressive. This Ultra 4K disc is 2D in its presentation and is a huge step up in terms of picture detail, brightness, colour representation and overall awe.

Detail is sublime right down to the minutest element; skin texture, watery eyes, tiger (or meerkat) fur and whiskers, clothing weaves, survival manual, newspaper writings – all these minutiae are exquisite realised with perfect edges. But where the picture really shines is with landscape shots, the overlook of the tea valley with the plants swaying in the breeze or the pickers hunched down collecting, or the meerkats standing to attention; the edges here are far superior to the Blu-ray and add significantly to the 3D punch of this 2D image.

And as good as the detailing is, it is the wider colour gamut and the higher dynamic range that really ‘push the boat out’ in terms of this picture. Sunsets are dripping with glory, there is actually a circular orb in the sky rather than a yellow smudge, and the clouds drifting over, are gorgeous in their colouring, while the sky looks so natural and well defined. The greens of the tea valley are lush enough to get lost in and the deep blues under the ocean sea are enough to feel like you are getting wet. Indeed the expanse of the ocean is incredible; the reflections on the surface, the crests of the waves, the line of the horizon – this, together with the perfect representation of the sky are quite breath-taking. The tiger’s colouring is beautiful, and together with the enhanced detail looks like you can run your fingers through his fur. When it comes to the luminescent night scenes the picture is simply amazing; the stars in the night sky are pin points, there is now definition to the moon’s face, and all the photo luminescent animals are under the surface of the water, and when the whale leaps out the picture is like a dream.

Perhaps the only negative would be the real world where Pi is telling his story; the flesh tones here do appear a tad weak, though the dynaminism of image is such that this can be forgiven. Digitally there are no compression issues or edge enhancement, there was some slight banding when the ship goes down (lights under the water) but overall the picture is pristine with the digital source being clean as a whistle. Perhaps the largest step up from the standard Blu-ray in terms of quality I’ve seen; although whether or not it is an improvement over the 3D is a difficult one. There's no immersive audio upgrade, the English DTS-HD MA 7.1 surround track is the same as that found on the standard Blu-ray release and is quite excellent. The surrounds are used extensively to fill out ambience (weather, crowds, animals etc.) and effects, such as when Pi is writing out π and the class room is erupting behind him, or when the storms are raging with thunder and waves crashing around, or the meerkat’s chattering, or the whale crashing down – there is a real sense of being in the action without it being over the top. Dialogue is clear and precise, never lost in the mix and sounds very natural. The score sits happily within the mix adding the on screen presence without being over bearing and, again, placing you in the centre. Bass is tight and controlled with LF effects aplenty, be it thunder or the low growl of the tiger. The 4K Ultra Blu-ray disc has no extras; all of them are housed on the included standard Blu-ray and are identical to those previously available.

A Filmmaker's Epic Journey – An hour's worth of ‘making of’ documentary, split into 4 parts, that takes a look at the enormous effort to bring this four year project to the screen; includes interviews with cast and crew while looking at writing, editing and effects.
A Remarkable Vision – a 20 minute feature with the effects team, headed up by Bill Westerhofer, discussing the photorealistic effects used throughout the film.
Tiger, Tiger Burning Bright – Brief 10 minute feature looking at creating the tiger on screen and the real and CGI versions needed to achieve it.
Gallery – Pictures of pre-production artwork.
Storyboards – Storyboards for 7 scenes. Life of Pi is one of those engaging stories told by a master of the visual art – Ang Lee. And it is a visually stunning piece of cinema, making full use (at the time it was made) of the brand new format of 3D. The story is equally as engaging; told through Pi himself to an unnamed writer we hear how he survived a shipwreck after losing everything and everyone he knows and what he went through to come out the other end. Whether it's the tale with fanciful animals or the heartbreakingly awful ‘real life’ version, the viewer is asked to make up their own mind on the actual events. Beautiful.


A massive improvement on the standard Blu-ray

The 4K Ultra HD Blu-ray set is equally as stunning in terms of its picture which has more detail, far better colour representation, a stunning contrast level and is, in every way, a massive improvement on the standard Blu-ray picture. The DTS-HD MA 7.1 surround track is the same (no Dolby Atmos or DTS-X upgrade unfortunately) but that is no bad thing as it is equally as absorbing in terms of effects, layering and bass. The extras too are a holdover from the previous standard Blu-ray release.