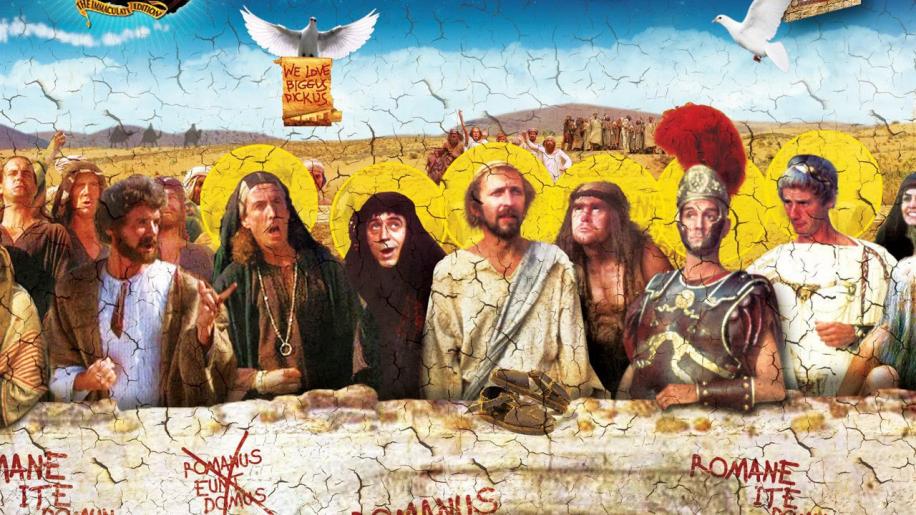 After The Holy Grail (1975), the Monty Python team wanted to make a second film quickly. Unfortunately, that was not to happen and it took them four years to get the finance together for their next cinematic outing. One of the major problems they had was getting the finance for the film - a Biblical comedy where a young Jewish man called Brian (Graham Chapman) finds his life becoming inexplicably entwined with that of Jesus Christ.

But eventually, with the help of ex-Beatle George Harrison the team got their funding and Monty Python's Life of Brian was born.

It is hard to imagine now just how much fuss this film caused when it was first released - the Pythons were considered blasphemers and there were pickets outside cinemas. It was even banned in some countries.

The film for those who have never seen it involves telling us the life of a chap called Brian - a man who was unfortunate enough to be born in the stable next to Jesus Christ. After a mistaken visit from the wise man, his life becomes increasingly intertwined with Jesus, only Brian manages to become a figurehead for the Jewish resistance. Eventually, Brian even manages to find himself crucified - although the Python boys manage to avoid the thorny question of the resurrection.

The film was shot on the same locations that Zefferelli used for the seminal Jesus of Nazareth (1977) and despite a small budget the Python boys went for a level of realism that many may not have strived for - reasoning that this would make the comedy funnier. It certainly does this - and perhaps this it the reason why many people find the film so offensive? It really does look like a genuine biblical epic filmed in the genuine location. This gives the film an overall sense of realism.

But is it funny? Well, many would have this as the funniest and most consistent Python film. For me, it is certainly up there with The Meaning of Life (1983). The way it was written was as a series of sketches separately by different Python teams, and then the funniest ones were put into the film. Despite these sketch origins, the film manages to play much more like one consistent film, with a well thought-out plot and character development.

The jokes can be hilarious as well - especially when sailing close to the religious knuckle. Really, speech impediments shouldn't be funny - but with a lisping Pilate talking about his friend “Biggus Dickus” and explaining how he “wanks higher that any in Wome” grown men can be reduced to tears of laughter. There are many other classic scenes in this film as well - the stoning scene, the graffiti scene, and of course the song “Always Look on the Bright Side of Life” sung on the cross.

But the beauty of this film is that the Pythons do not only have one target. They are poking fun at religion, but also at fundamentalism, the Romans, and other weighty subjects. This gives the film a little bit more meat than their other cinematic outings and gives the film more bite as well.

These days, of course, the film is certainly not deemed as offensive as it once was - and this enables us to appreciate it for what it is. A very funny, sharply observed satire that is one of the funniest British Comedy films ever made. A worthy addition to anyone's collection.