I’m not going on a date with you, kid. 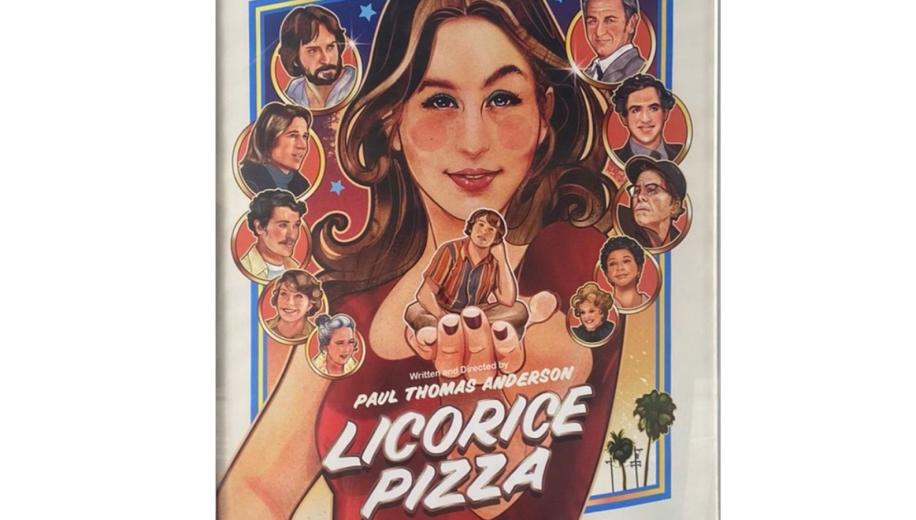 A hazy, dreamy trip down the strip malls and through the suburbia of Anderson’s early life, as the title’s initials and its colourful metaphor suggest, Licorice Pizza hangs together like your favourite concept album, which is to say, mostly only thematically and with a couple of tracks that you have to begrudgingly admit you would happily skip every time you listen.

Gary, a high school hustler with a huge personality, has his sights set high. He runs his own PR company, he’s an actor, he knows big things are coming to him. Alana does not. Shifting around between boyfriends and jobs and living with her parents and sisters, she’s suffering from a clear case of arrested development. The two meet-cute at yearbook picture day, Gary having his picture taken, Alana working for the photography company, and instantly spark. But Gary is 15 and Alana is 25.

Gary is self-assured, full of swagger, another Max Fischer (the pretentious-beyond-his-years protagonist of Rushmore, a film by a very different Anderson). When we first meet him, he’s a child actor, a star in a world where stars are born, we might say ‘destined for greatness’ except that he has clearly already achieved it in a way. His greatness is not that he’s a Hollywood leading man, nor will he ever be, but that whatever he does, he sees as a complete success. He’s bulletproof, even in the face of the less rosy version of reality that sometimes comes knocking in the film. Played by Cooper Hoffman, Gary has screen presence to spare. Perhaps not surprising given that Hoffman is the son of the late Philip Seymour. In many ways Cooper is a very different performer to his father – enthusiastic, kinetic, easily charming – but there’s an undeniable gravity to his performance, the capturing of a full, real character that is surely at least part-inherited.

... a group of people we could have known ourselves as teenagers doing things only slightly elevated from what we may have done.

Though the opening of the film is played through Gary’s experience, as the scenes progress, more and more time is ceded to Alana’s perspective. It slowly becomes clear that this is a coming-of-age story for Alana, despite not being the teenager in the relationship. She’s aimless and this appealing half-adult world of Gary and his friends catches her in its web as she resists adulthood. Played by Alana Haim (no stranger to Paul Thomas Anderson who has directed music videos for her and her sisters’ band HAIM), the film’s Alana is a pinwheel of different styles, attitudes and personalities. And Haim is absolutely dazzling in her performance, able to chameleon into each of Alana’s personalities with ease while maintaining a subtle through-line of magnetism and verve. Any nervousness about the age difference between the two characters melts away, partly because Alana acts like a teenager, partly because their ‘relationship’ really isn’t one for the most part, but almost entirely because rarely has a couple seemed so instantly at ease on screen.

Flashes of inspiration come frequently in the form of the supporting cast, a who’s-who of Hollywood now playing a who’s-who of Hollywood then. Tom Waits and Sean Penn steal a few scenes together as a movie producer and his ageing star, Waits leaning into his role as a laughable hack and Penn exuding a mix of true charm and genuine creep. But it’s Bradley Cooper who absolutely tears up the screen as hairdresser-turned-movie-producer Jon Peters, a riveting, hilarious and terrifying performance which must surely go down as one of the highlights of PTA’s filmography.

The casting is flawless. Hollywood plays Hollywood but everyone else is refreshingly normal looking. Gary’s friends, a cast of unknowns, and Alana’s family - played joyfully by Haim’s real life sisters and parents – are not film stars, they’re just the people who populate these characters’ lives. It’s another technique which Anderson uses to draw us into his nostalgia trip, a group of people we could have known ourselves as teenagers doing things only slightly elevated from what we may have done. And Gary and Alana are characters heightened only a touch above their friends and family. Charisma tweaked to perfection leaving us wishing we could actually know them or could have known them had we been there too.

That’s a line that runs through the entire film. The warmth with which Anderson lights his sets, from the dimming sun to the spotlights, permeates the atmosphere and creates a longing, a kind of saudade feeling for a place that never really existed in a time that absolutely did. But then the film is also careful to puncture that carefree essence every now and then, screwing with his own happy memories by implanting undercurrents of sleaze. It slaps you, but just for a second before enveloping you in its fuzzy nostalgia once more, almost a rebuke for enjoying yourself too much.

... a beautiful invitation to lose yourself in the dream...

Shot by Anderson, in collaboration with Michael Bauman, there’s a fascination with reflection and refraction in many of the shots. Textured gorgeously through the film it’s shot on, windows, mirrors, sunlight and streetlight, we see so much of the action anything but directly and uninhibited. It’s a beautiful invitation to lose yourself in the dream, with a warning that it is only a dream.

The disconnection and almost free-association between episodes sometimes creates a slight disconnect as you find yourself having to refocus on a character or simply accept a new turn of events. Like fellow indie-auteur Richard Linklater, Anderson is using these barest of threads to weave the film together and, like Linklater, occasionally pulls too hard, creating little breaks between the film and viewer. Alongside a couple of incongruous and misjudged scenes played for the most uncomfortable laughs, the imperfections in the film hold it back slightly from true Paul Thomas Anderson greatness.

An overwhelmingly welcoming and cozy look at those days of late sixties, early seventies Hollywood, Licorice Pizza is an answer, almost, to the near nihilism of Tarantino’s opus set around the same time. A romantic, twilit run of episodes starring a cast of characters so true, so open-hearted and so real that when the time comes to part, there’s a melancholy that these people can’t be part of your life for more than the two hours we’re given with them.

Licorice Pizza is out in cinemas now