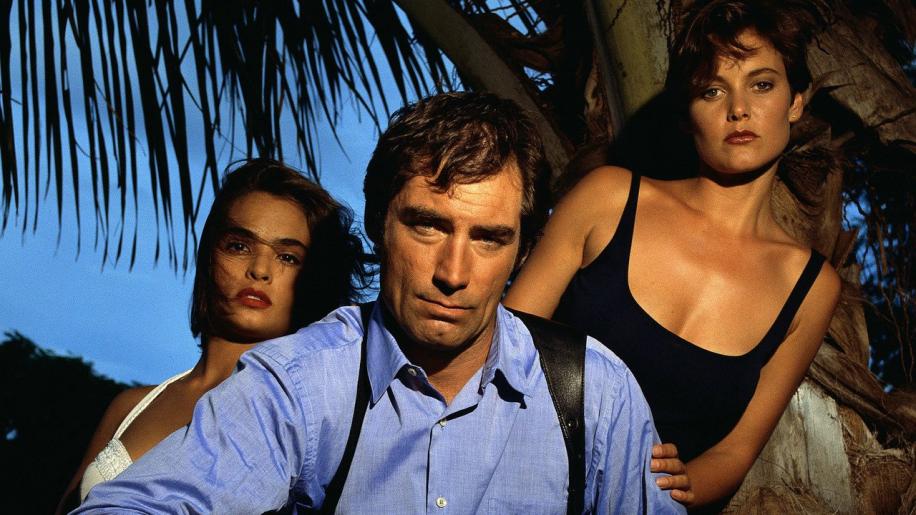 Tim Dalton's second and final outing in 1989 as James Bond 007 arrives on Blu-ray to the delight of fans of his incarnation of the suave spy. He'd made a fairly good fist of the role in 'The Living Daylights', but with 'Licence to Kill' we were to witness a more vengeful Bond. Originally entitled 'Licence Revoked', the title was changed during production. By now the Press were beginning to take unkindly to Dalton's complaints about them watching his rehearsals on set and so his professionalism as an actor was starting to get in the way of the requirements of being a movie star. Sadly the media don't take such things into consideration and it was deemed that Dalton was a bit of a whinger.
However, his acting ability is beyond reproach - an added bonus for director John Glen- and perhaps this is what irritated the Press so much at the time as they were unable to take the same cheap shots at him as they had at Roger Moore and actually had to use their brains to come up with something negative to say about the Bond of the day.

As it is, 'Licence to Kill' doesn't really have too much going for it in the memorability stakes. On most Bond movies there's a key scene with a standout stunt that immediately comes to mind. The pre-title 'shocking' scene in the belly dancer's dressing room in 'Goldfinger', the speedboat chase in 'Live and Let Die', the Little Nellie sequence in 'You Only Live Twice', the bobsleigh fight in 'On Her Majesty's Secret Service'......

Ask most people to come up with a comparable scene from 'Licence to Kill' and you'll have time for a dry Martini (shaken not stirred) while they think... and think.


Well, there is one scene that's pretty spectacular and that's the pre-title sequence where Bond is preparing to play Best Man at his CIA buddy Felix Leiter's (played by David Hedison) wedding.
The wedding day is interrupted as Leiter is informed that drug baron Sanchez (Robert Davi) is about to flee the country, so he goes off in pursuit with Bond tagging along in the Coastguard helicopter. The sequence has Bond heroically being winched out of the helicopter to attach a line to the tail of Sanchez' monoplane before both he and Leiter parachute down to the Church below as the bride gazes admiringly upwards.
I doubt if there are many bridegrooms who can claim to have made such an entrance at their own wedding.
We're taken into the title song performed by Gladys Knight, thankfully without her 'Pips', and it's a song that attempts to hark back to the good old days of Bond themes while providing an update for the modern day audience. This time round the movie score was written by Michael Kamen as John Barry was unavailable due to having to undergo throat surgery. The music has a Mexican theme due to the location of the movie and while Mr Kamen provides a contemporary score, it rather feels like there's something missing. Come back Mr Barry.

As for the storyline, Sanchez' henchmen kill Leiter's new wife on their honeymoon night while Leiter himself is fed to a shark. Bond finds Leiter in a bodybag with a note pinned on it that reads 'He disagreed with something that ate him'.
Bond is then out for revenge, turning down a mission and having his licence revoked by M (Robert Brown). One of the reasons for the title change on the movie was that having your licence revoked in America generally means losing your driving licence.
So anyway, with his driving licence intact, Bond hunts down Sanchez, ruins his latest drug shipment and makes off with $5 million in used notes by water-skiing behind a
Plane fitted with floats, then flying off into the sunset.
Bond recruits Pam Bouvier (Cary Lowell), an ex-CIA agent-pilot, to help him with his quest and then journeys to the "Republic of Isthmus" (a fictional country loosely based on Panama) where he finds his way into Sanchez's employ by posing as an assassin looking for work. With the aid of Bouvier, Q (Desmond Llewellyn), and Sanchez's battered girlfriend Lupe (Talisa Soto), he frames henchman Milton Krest (Anthony Zerbe), making him appear disloyal to Sanchez.
There's quite an unusually large role for Q in this movie as he takes leave to go and check up on his gadget destroying agent on location and uses the opportunity to deliver a suitcase full of lethal toys to arm Bond.
Bond eventually has his cover blown, but escapes to pursue Sanchez in a petrol tanker in which a large quantity of drugs has been dissolved. This is probably the most exciting sequence in 'Licence to Kill' and Bond has a rough time, but eventually it's down to Sanchez and our boy, 'Mano a Mano'.
Will he win? Come on, who are you kidding, this is Jimmy Bond.

Overall, this is a Bond movie that broke the mould as it moved away from the jokey extravaganzas that had gone before in an attempt at realism. This time Bond is up against a drug baron, not some megalomaniac who wants to control the conquest of space or detonate a dirty bomb in a convoluted plot to gain more gold. In that sense it made Bond more down to earth, but maybe it was ahead of its time - maybe that needed to be left to Dan Craig twenty years later.

This was also one of the few Bond movies to not be made in a British studio. Although Pinewood was used for post production and sound mixing, the production base was the old Churubusco studios in Mexico. This seemed like a good budget saving idea but had practical problems, like no proper sound stages and power generators that could clearly be heard on the recordist's Nagra.
During shooting, the production costs were under daily scrutiny by United Artists thanks to the overspend on 'Moonraker' several years before.
This was strangely the first Bond movie to attract a 15 certificate in the UK, mainly due to the inclusion of the scene depicting Milton Krest's exploding head in a pressure chamber, and this caused a loss of revenue due to the exclusion of part of Bond's traditional audience.
At the time, producer Cubby Broccoli felt that the movie was poorly promoted and Eon's high hopes for Bond to be massive in the USA with this one were dashed by relatively poor initial box office returns. The mid-way title change meant confusion of the cinema going audience and extra promotional costs due to re-printing of material.
Maybe time for a new look too, but it would be 6 years before the next Bond movie appeared.

There's this guy in the 'Remington Steele' TV show who looks rather good.......