LG has an LED LCD TV too! 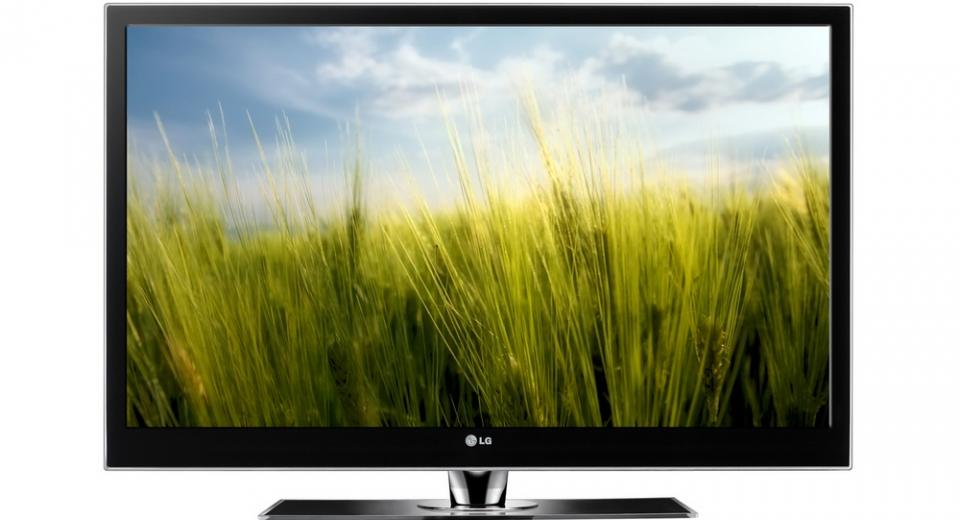 LG's been making real advances with LCD TV lately. Over the last year, the company have been remarkably attentive and responsive to any resolvable issues we've reported to them, and have been producing some displays that are certainly worthy of your attention. Nowadays, LG displays contain full controls for almost every aspect of the picture you could wish for; meaning that once it's properly configured, any remaining issues with an LG TV will be down to limitations of the hardware itself, rather than limitations imposed by the software designers.

Here today, I have the LG 42SL9000, which is LG's premium 42” LCD HDTV. At this level, you'll find LED sidelighting illuminating the picture (rather than fluorescent backlighting tubes), the usual 1920x1080p resolution, a “one sheet of glass” design, and all of this in an outrageously thin package. Let's see how it does!

The SL9000 series displays hit all the right spots in the looks department. The single sheet of glass that makes up the front of the display looks great, and the display is incredibly thin indeed – although you'll likely forget about this quickly, unless you have the display in the middle of a room, or in another location where you can actually admire its slimness from all angles. Connectivity is pretty standard for a modern high-end HDTV. There's 4 HDMI inputs, 2 SCART terminals (one is RGB, the other is a basically useless Composite SCART), Component inputs, an RGB PC input (“VGA” type), and an RS232C port for system integrators. There's also a USB 2.0 port, which you can connect a thumb drive or hard disk to to view photos, movies and music.

As noted, LG's menus contain just about every sort of control we'd need to get the most out of the panel. Changing the “Picture Mode” to one of the ISF-branded “Expert1” or “Expert2” modes unlocks the full set of controls (other modes limit the selections in a bid to be more user-friendly). The “Expert” modes unlocks separate Sharpness controls for both the Horizontal and Vertical planes, which isn't an option I've used, but is commendable.

The “Expert Control” menu houses the main calibration options. I've explained what the controls here do in many other LG reviews before, but just briefly, the important controls are for Gamma, Real Cinema (film cadence detection), as well as the Greyscale controls and Colour Management System. Unlike almost every other display on the market, LG's SL9000 allows for not just a 2-point greyscale calibration (which offers 6 controls: RGB controls for the low end, and RGB controls for the high end), but also for a 10-point control. This means that the RGB parameters can be individually adjusted with much greater precision. As an example, I often see LCD displays which have relatively consistent greyscale tracking, but have an excess of blue at, say, 10 or 20 IRE. 10-point control allows little quirks like this to be accounted for without sacrificing accuracy elsewhere.

LG's Colour Management System is not state-of-the-art: it offers control over the Saturation and Hue of all six Primary and Secondary colours, but not their Luminance. It's a very good degree of control, but it's only part of the puzzle. However, we may not need this level of control if LG's display is accurate in this regard already.

The LG 42SL9000 can play back most popular video and audio codecs from a USB device, and like almost every other display out there now, can also view JPEG images too. LG's unique feature is Bluetooth support, which allows you to pair another Bluetooth device (usually a mobile phone) and transmit images from it to the screen. I tried it, and it worked with my phone (a Samsung, actually), but I wasn't sure why anyone would want to look at cameraphone images at this size! RGB Level Tracking was good for an untouched preset mode. The tracking is not entirely linear, as is evidenced by the crookedness of the chart, especially closer towards the right. Much of the time, errors were below visible threshold (as is evidenced by the DeltaE figures at the bottom-left: errors below 2 should be impossible to spot.

In terms of Colour, the display was already doing an excellent job. There were no unforgivable Hue errors, and most of the colours were saturated to the correct amount (although Blue shows a large error). This is a solid out-of-the-box performance and bodes very well indeed for the Calibrated result. As you can see, post-calibration performance is basically flawless. This calibration took some time and used the 10-point Greyscale mode, which allowed for unprecedented levels of fine-tuning. Most DeltaE values (errors) measured below 0.5. This level of accuracy is comparable to, and probably better than some studio monitors used in mission-critical film and TV mastering operations. For reference, the average human eye can't distinguish variations of under 2 DeltaE easily, so the LG's performance here is truly remarkable.

Colour fared very well indeed. As mentioned, the 42SL9000 only features a 2D CMS. In this instance, the Hue control effectively operates on its own, but the “Colour” control affects both Saturation and Luminance, so some calibration compromises were necessary. As you can see from the chart, some of the Saturation levels are actually less accurate than they were pre-Calibration, a necessary error introduced in order to correct Luminance levels (which, as you can see from the “Delta Luminance” portion, are basically non-existent). However, the combined errors are all under 1, except for Red, which is just slightly over.
This is an absolutely exceptional set of results, and just goes to show what can be accomplished when manufacturers provide suitable amounts of control over the hardware they sell us. Congratulations, LG!

Like most of the LG TV line, the 42SL9000 did a good job of scaling SD content to the HD panel size. The scaling wasn’t as crisp as the best devices, but there’s also not a lot of ringing around high frequencies either, which is a good trade-off. (Some displays have a lot of ringing AND look blurry, the worst of both worlds, so LG’s is at the better end of the scale).
When it comes to diagonal interpolation, the LG delivered fair, but not exceptional performance. “Diagonal interpolation” describes the processing whereby the TV’s video processor smooths jagged lines during the conversion of Interlaced video to the TV’s Progressive panel. The 42SL9000 processed this content in such a way that small jaggies are sometimes visible on the test patterns and in real world content.

Finally, in terms of Film Mode detection, the 42SL9000 performed admirably. For the technically inclined, the TV passed the 2-2 PAL, 2-2 NTSC, 2-2-2-4, and 3-2 cadences, when the “Real Cinema” mode is turned on. For those of you scratching your heads, this just means that when the TV is fed an interlaced, standard-def signal (like you get from an older, non-upconverting DVD player, or a TV signal), then the TV switches into Film Mode to avoid throwing away vertical resolution.

The 42SL9000 performed strangely in input lag measurement tests. At all times, the TV would lag by a moderately lengthy 49ms, which will be noticeable to more attentive gamers. What’s interesting is that enabling the Game Mode or the PC Mode didn’t cut this number down any. Selecting the later of these options bypassed some image processing functions, but the delay remained the same.

Interestingly, for the gamers out there who also happen to be die-hard videophiles, it’s not possible to get 4:4:4 (full chroma resoluton) input on this TV, so small coloured details will be slightly blurred at all times in a similar way to images from Blu-ray and DVD. This is interesting, because the step-down 42SL8000 model delivered full chroma resolution when it was correctly configured to do so, as well as less input lag.

After calibration, the LG 42SL9000 doesn't employ any sort of auto-dimming, a feature which plagued the LED-centric Samsung UE46B8000 LCD TV. Because the sidelighting remains constantly on, power consumption is constant, too, and depends on the “Backlight” setting. In my viewing environment, I left this at “50”, for the record. Below, you can see some sample measurements which reflect different Backlight settings.
Backlight at 0: 52 watts
Backlight at 20: 74 watts
Backlight at 50: 104
Backlight at 80: 133 watts
Backlight at 100: 153 watts

The standard of picture being put out by the 42SL9000 is largely good. There’s almost nothing wrong with the display at all, except for one thing – its black level. Unless the screen is filled with bright content, you’ll notice that blacks are a misty grey, and the only way of taming this is to turn the Backlight control down, which reduces the overall contrast and "punchiness" of the image. There’s also a large amount of viewing angle fall-off, so the image loses contrast fairly rapidly when you move your head to either side.

The good news though is that the display puts out a highly accurate image (provided you’re viewing face-on, due to the aforementioned viewing angle limitations), and that there are no stand-out motion issues, except for the usual LCD blur, which is simply a limitation of the technology. Some other LCDs have issues where certain colours leave more noticeable blur than others, but here, everything is largely uniform.

Like the SL8000, the 9000 has no issues when fed with 24p content. Motion is reproduced cleanly, without judder. There is no distracting auto-dimming (except when you switch to a channel that’s not in service, a good idea from a power-saving point of view), so the light output of the panel remains consistent during actual viewing.
Gaming Performance

LG have delivered an LED-based LCD display that features all of their usual trademark strengths and weaknesses. The 42SL9000 features a wealth of image calibration controls which lead to absolutely superb greyscale and colour reproduction, good quality video processing, and an underwhelming black level which can rob some material of depth.

My main issue with the 42SL9000 is simple: I don’t really see the point of it when LG already have the 42SL8000 available for less money. The company promotes this 9000 model as an “LED TV”, whereas the 8000 model is simply an “LCD”, so is this simply a case of LG jumping on the bandwagon and making sure they have some way to profit from the public misinformation about LED backlighting technology? For the readers who aren’t yet in the know: “LED TVs” are not the next-generation devices some manufacturers would lead you to believe, but are simply LCD displays with a different backlighting system to illuminate the picture.

Both the SL8000 and SL9000 TVs feature excellent calibration controls and are superbly thin, but the 8000 model is cheaper and features less input lag for gamers. As a result, although the SL9000 is not a bad display, it’s not really clear where the extra money is going.