We never thought we'd play chess against a speaker... 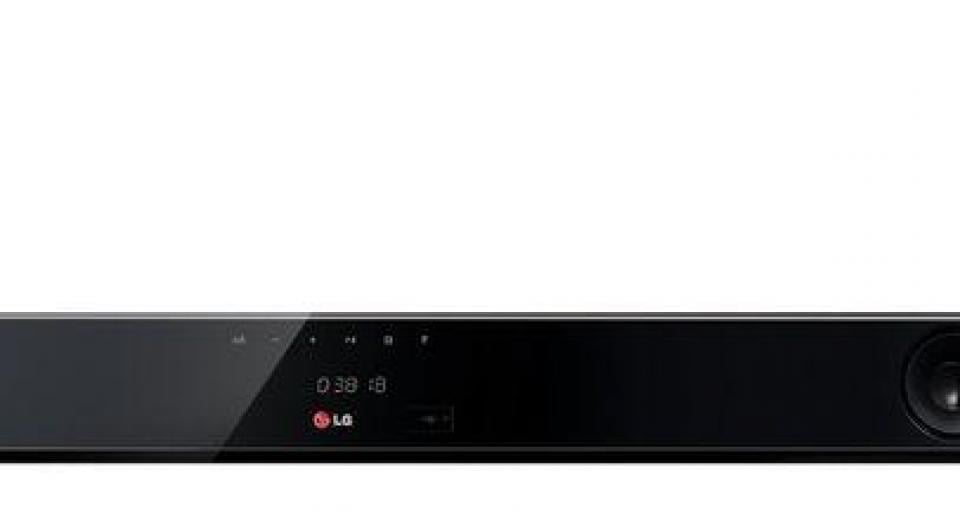 Ah, ba ba ba ba barbara sound as The Beach Boys thankfully never sang but had the manufacturer’s current favourite audio product been around in the 60’s we can picture the advertising horror only too well. Notwithstanding the Californian five-pieces’ current unavailability for promotional work, what can LG do to set the NB3730A apart from the rest of the soundbar crop? Put in some Smart features, that’s what, but will this be at the expense of some convenience and, more importantly, audio performance? Let’s take a look.

There’s only so much you can do with a soundbar, style wise, and LG has played it safe with a piano black main bar and matching wireless subwoofer. It’s not the prettiest product the Korean’s will ever produce but we’d rather it was unobtrusive, given its purpose and intended placement. The NB3730 measures 104cm across so will match most 42-47-inch TVs in span and at only 7cm in height, it should sit beneath most flat panels without obscuring either screen or Infra-Red receiver. The included remote is larger than most soundbars’ but that’s to take account of the Smart TV features and the typical LG design is sensibly planned with nice, big buttons. Connectivity options are unusual in that whilst the LG NB3730A does feature HDMI compatibility, it only has an ‘out’ port and no ‘in’, meaning you will need a TV with ARC compliance in one of its HDMI ports to get the most out of this package. For those not aware, Audio Return Channel – to give it the full title – allows the TV to act as a conduit for both the audio it produces and that it receives from external sources, such as a Blu-ray player. Frankly, if you haven’t a TV with ARC, the NB3730 is an almost complete waste of your money; so be warned. The inward HDMI connection has been sacrificed for a LAN port, although it does also have wireless built-in, and there’s the option of 5.1 audio to be piped in from a S/PDIF digital optical source. To the front, beneath a flap, is a USB input allowing audio files to be played from connected devices and the 3730A also features Bluetooth connectivity for your suitably equipped smartphone, tablet or PC. Just above the USB port are some basic touch-sensitive function buttons and small visual display giving feedback on volumes, speaker levels and source input.

As ever, LG has created a very nice user interface for NB3730A featuring an attractive home screen from where you can select your input, access the internet features and your home network for streaming files and make some basic adjustments in the Settings Menu for options such as Network, Display and Audio; all of which are fairly self-explanatory and fairly safe to be left at default values, in most cases.

The NB3730A may not have quite so many Smart features as LG's TVs but who’d have ever thought you’d be accessing the internet from a speaker? Under the ‘Premium’ banner are everybody’s favourite connected feature – Video on Demand Services. The two biggest hitters, BBC iPlayer and YouTube, are duly present and there’s also subscription based services in the shape of Netflix, LOVEFiLM and blinxbox on hand. The processor inside of the NB3730A is clearly nowhere near the calibre found on LG's TVs, however, as we found accessing, and using, YouTube, iPlayer and Netflix a far more clunky experience than with other devices. Still, they do work even if at times they do feel unresponsive.


Under the banner ‘Smartshare’, users gain access to the DLNA capabilities of the 3730 which we found a touch flaky, not in terms of file support, which was comprehensive just that connection with our DLNA servers kept cutting out for no apparent reason and that was with both a wired and wireless connection. In contrast, we found the APT X enabled Bluetooth connection to be steadfast and we used it extensively to stream internet radio and cloud based content from our Nexus 7 with no drop-outs whatsoever – which is very unusual for Bluetooth.

Assuming you’ve connected the LG NB3730A up to the ARC compliant HDMI port of your TV, you’ll need to make sure both the display and speaker is set up for the function - it’s usually in the Audio menu for TVs and its sensibly enabled by default in the LG. Once both parties are in full communication, your TV remote should then act as the volume control for the speaker bar which is handy and prospectively cuts down on the number of remotes cluttering the living room, although features like setting speaker levels for the L/R and subwoofer can of course only be accessed from the LG remote. We hooked the NB3730A up to a couple of ARC compliant TVs during the review process and found different behaviours with each. Whilst we had to toggle the ARC functionality of the Philips 55PFL6008 on and off each time to get it working, we found the Panasonic 42ST60 would keep the ‘lock’ so it just goes to show that even though ARC is a HDMI standard, you’re at the mercy of each manufacturer's own interpretations of such. Bluetooth operations are very simple, with the NB3730A automatically opening itself up for pairing once the BT function is selected. The remote should also be able to play, pause and skip tunes from the connected device for further convenience.

We’ve been pretty underwhelmed by most manufacturer’s implementation of pseudo-surround processing in the past but we have to credit LG with making a pretty good fist of their 3D DSP (Digital Sound Processing). The 3D sound effect certainly works best in boxy rooms that aren’t too big but given such a placement, there is the occasional sense of effects being placed rear and sideward with good elevation. In all honesty, there wasn’t that much in it in comparison to the bypass or default User EQ Modes but the 3D mode definitely added a greater sense of elevation without the need for adjustment. Where the LG NB3730A could certainly use some manipulation of the default configuration is in the setting of the Subwoofer level. At its ‘neutral’ level, there’s almost no bass presence over and above what the better flat panel TVs can produce so, unless you live in a box, we’d suggest cranking that up as a first priority. Even with the sub maxed out, the NB3730A does feel lacking in comparison to other products we’ve tested at this price-point, in terms of providing any chest-thudding thrills. There’s nothing particularly wrong with the package; audio levels are well matched, meaning dialogue generally remains clear from the effects and the sense of localisation and placement is also quite good but in pure audio terms we’ve heard soundbars costing half the price perform at least equally as well. It’s probably with electronic and dance music where the NB3730A performed best; it’s rather crisp nature lends itself well to synths and hi-hats and the excellent Bluetooth streaming stability means it acts very nicely as the jukebox in the living room but it’s generally just a bit thin and flat in most departments; anodyne is probably the word. Judged on its primary function – as conveyor and enhancer of your TVs audio – the LG NB3730A does OK but unless you really want those smart features we’d probably advise looking at the step-down model to save yourself a few bitcoins.

The LG NB3730A is simply styled with a piano black finished main speaker and matching wireless subwoofer. There’s a handy and unobtrusive visual display located plumb in the middle of the main speaker but were it not for the presence of the LG logo, it could be A.N. Other soundbar from any producer; not that we really care, we’d rather it didn’t stick out.

Let’s get this straight from the start: if your TV isn’t one blessed with ARC compatibility through at least one of its HDMI ports or, more drastic still, you don’t have a TV with HDMI, then the NB3730 isn’t really the product you’re looking for. The Smart functionalities certainly add to the asking price and the lack of an HDMI input is a potential shortcoming. We’d rather they’d have sacrificed the LAN port for an HDMI in and made it Wi-Fi only but as almost all current flat-panel TVs support ARC, there’s still a potentially large target market.

There’s certainly something to be said for having the likes of iPlayer, Netflix and LOVEFiLM built into a multi-purpose device that sits under your telly and the 3730A also has lots of available apps as well as media streaming abilities but we found it a bit lacking on the processing front. Compared to the various Smart TVs and add-on boxes we’ve tested, app implementations felt decidedly pedestrian in their responses and the DLNA functionality was on the flaky side. On the plus side, the Bluetooth streaming proved extremely robust and the 3730 acts as an admirable jukebox for your tablet, phone or PC.

Given the rather lacklustre Smart performance, the question is can the LG NB3730A justify its circa £330 pricetag as an audio product? The answer to that is probably not. There’s nothing particularly wrong with the 3730; the 3D processing is actually rather good and the sense of localisation is pleasing with plenty of elevation but it all feels a bit thin and flat, even with the sub fully engaged.

If HDMI or Smart functions are not a requirement in your set up and you can get by with optical or coaxial digital audio, we’d suggest looking at competing products; or moving further down LGs product portfolio for better, or comparable, audio performance at a reduced price-point.