How does another of LG's ultra-thin Scarlet displays perform? 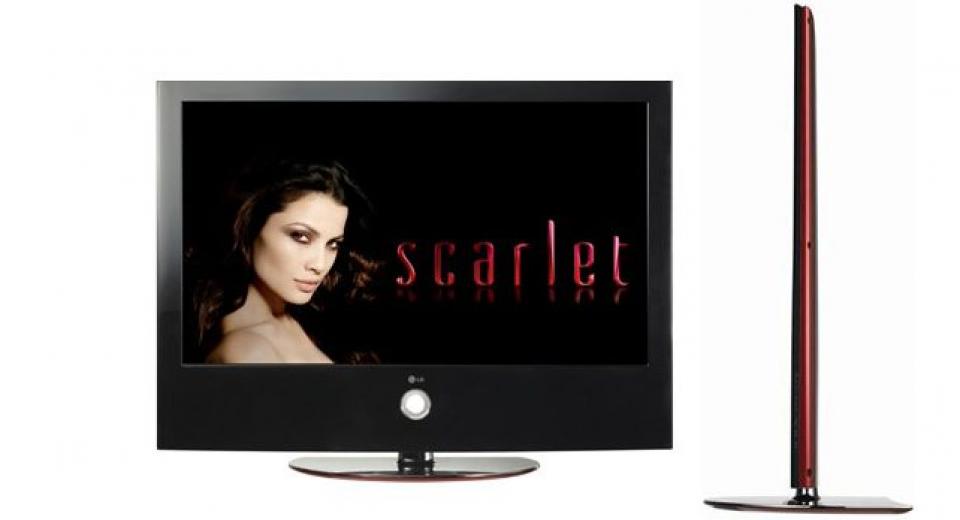 The 42LG6100 is a 1920x1080p LCD HDTV from LG, built around their “SCARLET” design philosophy. Like so many LCD TVs on the market today, it’s a big-screen (42”) gloss black display with a Digital Tuner, 4 HDMI inputs, a Component video input, 2 SCART sockets, a PC VGA input, and 100hz Frame Interpolation technology. This is all fairly standard, but it's the design and features which set LG's display apart. The design of the TV is certainly unique: LG have placed a curiously large “blank” area below the screen with a hole in the middle, which will either look bizarre or avant-garde depending on your taste. Most importantly of all to some, though, is the fact that this TV is THIN – really thin, in fact. That alone will probably give it a good amount of appeal.

Similarly to the LG 42LG7000, which we recently reviewed, the 42LG6100 has quirky performance to match is quirky design. Read on for the full details...

I’ve praised LG’s menu system in the past for being remarkably clean, nice to look at, and user friendly. The same system is implemented here: menus are concise, to the point, and attractive. One of my favourite features is the Input Selection screen which shows a visual representation of the different connectors on the back of the TV, and also allows you to label them with tags such as “DVD”, “Blu-ray”, and “PC”, for the ultimate in ease-of-use. Technophobes in your family should have no excuse for asking for help when operating this display! What’s really special about LG’s latest displays, though, is the amount of control given to the user in the Video Setup (“Picture”) menu. Enabling one of the two “EXPERT” modes gives control over Backlight, Contrast, Brightness, Sharpness, Colour, Tint, Gamma, "TruMotion" motion smoothing, Colour Matrix, Greyscale, and Primary and Secondary Colour and Tint. These options are likely to be out of the scope of most home users and are really intended for calibrators. Recent LG displays have had unusually accurate Greyscale and Colour performance in our tests. This was also the case with the 42LG6100: even with a basic calibration performed, the display was more accurate than many:

As is visible from the CIE chart, the Saturation and Hue of each of the Primary and Secondary colours was very close to the Rec.709 HDTV standard, which is excellent. I've seen displays which push the red and, most commonly, green colour points out to eye-blazing extremes, so it's nice to see LG take a more accurate approach here. Although the Greyscale performance wasn't perfect, pay attention to the Delta Error level (the pink line) and notice that it's actually visible: usually, this is so high that it's actually off the chart! Luminance was also excellent, indicating flat gamma performance (meaning that dark areas were just about as dark, and bright areas were just about as bright, as they should be, without manipulation).

After calibration, accuracy was stepped up a few notches, resulting in flat RGB tracking, accurate colours, and excellent Gamma to boot: Most notably, the Greyscale performance has improved to the extent that Delta Errors (pink line) were kept below 2 almost exclusively. For reference, remember that a trained eye can tolerate an error of up to around 4 before actually noticing it! In addition, the saturation and hue accuracy of each colour was fantastic, and the great luminance performance remained.

All of this was made possible by the ISF controls on the LG 42LG6100. The improvements in accuracy are visible with real content (with more realistic flesh tones and less radioactive-looking colours), and can be proven by the charts. There's one thing that the CIE chart doesn't show, though, and that is the Luminance value of each colour (the chart sadly only shows Saturation and Hue). Luminance values were about right, which is fortunate, because as excellent as LG's picture controls are, they don't give us control over this aspect of colour reproduction. Regardless, these are absolutely excellent results, which make the problems we discovered later all the more frustrating...

Unfortunately, like LG’s other recent displays, the stellar Greyscale and Colour performance are overshadowed by some quirky video processing issues, some of which I previously spotted when I was reviewing the LG 42LG7000. During the review, I spotted ringing around high-constrast objects, interlacing artefacts where there should be none (on progressive content), and reduced picture definition due to what looks like a terribly misguided attempt at noise reduction. None of these would really be a problem if they were optional, but they aren’t: we can’t disable them.

The latter of these problems is the one that annoyed me the most. Whilst playing back some pristine single-pixel resolving Blu-ray movies (Sony’s Spider-Man 3 in this case), the finest details simply weren’t reaching the screen. This had the effect of seriously corrupting the film’s natural grain texture as well as shaving off (literally) other picture details: Tobey Maguire’s stubble, and fine grains of sand, for example. Quite frankly, this is insane: LG need to realise that the point of High Definition TV is to have definition that is high!

Like the 42LG7000, much of this unwanted processing can be shut off if you can convince the TV that the incoming video is coming from a computer and not a video device (the probable reason for this being that these picture processing algorithms, while ugly enough on video content, could chomp through the fine lines and icons on a computer display and actually make it unusable). To do this, you have to label the input as “PC” in the TV’s menus. That often isn’t enough though, because the 42LG6100 will only believe you and shut off the processing, if the input signal has a computer-style 60hz refresh rate. In other words, this trick won’t work with your 50hz-based upscaled PAL DVDs or your 24p Blu-ray Discs.

Regardless, I ploughed through the Deinterlacing tests by sending the TV both 480i and 576i signals over HDMI. As with the rest of LG’s current displays, the diagonal interpolation (smoothing of interlacing jaggies) was excellent, but the second test showed that when the “Real Cinema” option was enabled, the display would often have a hard time discerning between Film and Video content. Turning this function Off forces the display into Video mode (which is not optimal). In other words, you’ll have to manually switch between these two options yourself for the best results with interlaced content.
The Film Cadence tests were incredibly heartening. Many of the more unusual NTSC tests passed, as did the most important 3:2 test. For PAL content, the 2:2 Telecine A test passed (the second failed, as usual, but this is all but irrelevant). These are excellent results, as some HDTVs from big name brands lack any sort of film mode detection.

While watching some Freeview TV channels on the 42LG6100, it became apparent that the TV was applying a heavy dose of MPEG Noise Reduction techniques to the often hideous broadcasts. As a result, the display does remove mosquito noise from the video, but unfortunately goes too far and begins removing traces of genuine detail, too. What’s more, there is no option to turn this off, so TV shows can sometimes look sub-par.

Better quality SD sources, such as DVD-Video titles, naturally fared better, but these too could look quite unnatural thanks to the detail reducing video processing algorithms in use by the TV.

The aforementioned video processing quirks with this display meant that high quality Blu-ray Disc titles were wasted on it. Outputting the Spider-man 3 Blu-ray Disc in 1080p/24 allowed me to spot interlacing issues (yes, on a 1080p feed), suggesting that the TV’s video processing is 1080i-centric. On top of this, the finest details from the film were eaten through and eroded.
It’s possible to remove these issues by forcing the Blu-ray Disc player to output 60hz and labelling the video input as “PC”. This leaves the image comparatively untouched, and gives some insight into the sort of quality we could have expected from this screen from all sources, had excessive video processing not interfered. Of course, this won’t do anything to help Sky HD or Freesat HD programming, which is 50hz and as such doesn’t escape the processing.

Although the already great Greyscale and Colour were only improved with calibration, there was little I could do to remove the most severe performance issues with this display.

Although the results were fantastic from the perspective of Greyscale and Colour accuracy, the flawed, undefeatable image processing could seriously taint the end result. As such, the LG 42LG6100 certainly provided a unique viewing experience, but ultimately I was just left thinking how great it could have looked.

LG’s fantastic picture controls, as well as their accurate greyscale and colour performance, prove that they can offer features that cater to fans of high quality video.

It’s for this reason that the 42LG6100 is so frustrating: its weak contrast ratio is an inherent limitation of the LCD panel itself, but more frustrating is the designed-in video processing which really sours what could have been a very respectable package. Although the company's efforts in some areas are incredibly commendable, it looks like LG have a little more to learn regarding what makes a great picture. Additionally, while I don’t normally comment on a television’s built-in speakers, as they’re usually serviceable at best and very rarely great, it must be said that the speakers fitted to this TV are unusually feeble.

Here’s hoping that LG will produce more restrained LCD TVs in the future, which share their current range's high points. For now, there are better displays to be had for the cash.