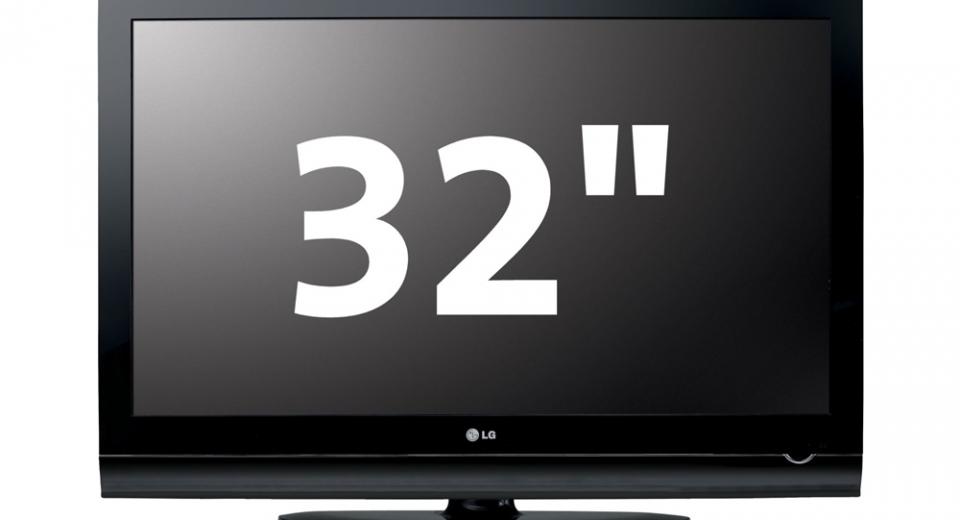 Up until recently only one manufacturer was producing Freesat HD enabled TVs and in the next year that number is likely to explode with multi-tuner sets on the way. In the meantime we have here the LG 32LF7700, a budget priced LCD TV with a Freesat HD tuner along side the usual Freeview and analogue offerings. The HD output from the Freesat service has, up until now, been left to the BBC and ITV, but industry watchers are predicting that the amount of free to air HD content will rise on this satellite service. One of the drawbacks for Freesat is the need for users to pay an £80 fee to have a satellite dish installed (if they don't have one already) to make use of the Freesat HD service. However, recent research has shown that the service has gained around 200,000 capable users in the last year, so there is a market for the HD offerings served up by Freesat HD.

So what we have here is a well designed and compact looking 32 inch LCD TV which has the now custom LG design keys. Under the screen we have a clear plastic strip which works in parallel with a silver strip about 2 inches up on the front bottom bezel. This strip dips on the right hand side where the LG sports its power light. The rest of the bezel is the usual budget fair with black gloss plastic creating a 2 inch border around the panel. Add to this a black plastic pedestal which is included in the box and that wraps up the design of this 32 inch TV. Also included in the box is the now standard LG plastic remote control which has the leather type finish on the front plate under the main keys that are well positioned and intuitive to use. The main keys for menu and picture adjustments are to the top of the remote which does its job admirably.

Moving to the rear of the panel we are greeted by three HDMI v1.3 slots (one on the side), component, composite, analogue audio inputs and outputs, an optical digital output, PC/RGB and a USB slot. There is also PCMCIA card slot, freesat satellite input and two scarts. So as you can see there is no lack of set up configurations with various sources.

Once we have connected all our sources and aerials its time to search through the menus and tune in the TV channels. We start with the Freesat set up which completes auto tuning in about 5 minutes. This process is repeated for analogue and freeview channels. Once this is complete, since this a typically user friendly LG TV, we move on to picture set up.

Unlike every other LG HDTV on the market, the LF7700 is unique in that it has a Freesat HD tuner and because of this we lose the ISFccc and Expert menus for picture set up. Personally I would have lost the Freesat functionality, but as LG are looking to add a cost effective Freesat set into the UK they felt that the added menus and the cost of adding them, was not compatible with the price point of this TV. We understand the business approach and the reasoning given for this, but have to say picture quality needs to be a priority on any TV, so lets hope the LF7700 can produce in this department. The usual user friendly and well designed menu system does travel to the LF7700 bar the expert mode, so you still have some control over the image, just no means to correct the greyscale and colour points. Another new feature here is the intelligent sensor which attempts to correct the image quality for the given room conditions and lighting. We would love nothing more than one of these sensors to actually work, but sadly as with most of the similar types of features on the market, this doesn’t produce a consistent or appealing picture with any accuracy.

So, what we have here is a budget LCD TV with Freesat HD added and some important features (in our opinion) missing. The important part of all this will be picture quality. So how does it measure up? Starting with a look through the picture presets brings up the usual mix of 'in your face' Vivid and Standard modes that push blue and where colours can look too intense, to the cinema preset which appears to try and gain some picture accuracy. Using this preset along with the warm colour temperature seems to be by eye the closest to producing any kind of accuracy and once we have set the brightness, contrast and other controls in a basic set up, we set about measuring.

As expected things are not quite perfect for an out of the box preset, but are far improved over the other picture preset options available. Of course a manufacturer doesn’t know what sources you will plug into the TV, or the room environment, so they can only reasonably offer a preset that attempts to get close. If we want complete accuracy to the international standards laid down for movie and TV production and video playback, we will have to do that via a calibration. That may prove difficult with this particular TV. But lets look closely at what we have out of the box.

The greyscale results are actually pretty good and although there is a high red and a low blue, error points are low enough to not really cause us any real concern. However, things could be a little better here as onscreen images do have a yellow haze. Gamma appears to be well behaved and around the desired 2.2 point, so things look promising. Moving to the colour points and how they line up with the ITU-BT.Rec.709 HD standard (which incidentally is almost identical to the Pal colour space), we can see the inner triangle of the Rec.709 colour space and on the outside our measured result. The points line up in a very respectable manner but do have errors, mostly with colour hue and the secondary colours suffer from this error the most. Talking about errors we also have luminance issues where most are too bright.

While there are errors present in the 'out of the box' results, we also have results that in all fairness are not as far out as some TVs on the market. The issue we now have is that we cannot correct all of these issues because this particular LG set has no expert mode. So, with no expert ISF modes available to us, we have to resort back to the age old service menu approach. Of course this will only help with greyscale correction as there are no controls for a CMS. Indeed the service menu in this model is also difficult to access and after many phone calls with LG technical support we managed to find the single levels white balance controls for a greyscale correction. Great you might think…well almost.

Because we only have one set of RGB controls the idea here is to find a point where we can get the most uniform results of the RGB white mix. This happened to be at 50ire and after a quick correction you would think that things would be set. Well it was while performing this task that we encountered the biggest problem with the LF7700. This TV is using some kind of auto dimming feature which progressively changes luminance points on a whim. Even looking through the service menu – which on this TV was pretty basic - didn’t offer up any solution to the problem. So although we could correct the greyscale in a rudimentary manner, this luminance issue made things difficult to achieve any kind of picture accuracy. As you can see we made a slight improvement on the greyscale and secondary colours moved slightly, but things were sadly far from perfect. In all the results were better out of the box than expected and will offer some improvement in image quality. However, the lack of ISFccc controls here makes attaining accuracy a little more difficult.

Thankfully the quirky video processing of last years LG LCDs has not returned here on the new models. On the older sets there would be ringing added to high contrast objects and interlacing artefacts’ on progressive material. Well I am pleased to report that those issues along with a strange high frequency filter effect on HD material are not to be seen on the LF7700. Instead the de-interlacing and scaling works admirably under the circumstances, passing cadence tests on the HQV discs with most of the difficult material.
This is an LCD display and as such we are treated to LG’s 100Hz trumotion technology. This helps with fast moving content and cannot be defeated on the TV. It does have a tendency to make film material look a little unnatural, but it is one of the better systems I have seen lately in that image artefacts are reduced. However, one of the most annoying processing features on the LF7700 and one we cannot switch off is the image dimming algorithm. This is constant and very distracting and affects the image luminance in an unacceptable manner. We are stumped as to why this technology is being used on this LCD TV as the image when stable is acceptable. If it is here to resolve a better black level response, then it fails miserably.

As you can see above the main issue with this LCD TV is not its image quality, but the so-called added features that are supposed to improve things. Well sadly the auto dimming feature that cannot be disabled in the menus or the service menu completely destroys any hope of a consistent image. Although things measure pretty well out of the box and we can improve the greyscale slightly with the service menu, it is all for nothing with such a progressive and aggressive dimming feature.

The image in cinema mode and with the warm temperature selected is pretty good in terms of image colour and uniformity. There are errors with red looking too bright and at times introducing banding. This, while rare, is unfortunate along with the constant yellow tone of the image, that with a lack of calibration controls, we cannot dial out. Black levels, when the constant dimming doesn't get in the way are pretty strong and relatively deep for an LCD, so it is a shame that this dimming gets into everything. There are a few other issues such as a relatively poor viewing angle when sitting to the sides of the panel. Seriously, I am sad to report that image consistency is not present with the LF7700, which is a shame.

On the plus side the Freesat HD tuner works as it should and the EPG menus are very easy to follow. The HD performance is sharp with plenty of detail and on the whole colour performance is acceptable for such a TV. However, the panel lacks absolute contrast performance and...well...do I need to mention the dimming again?

While the LF7700 has lots of things going for it, we just cannot forgive some of its flaws and as such, we simply cannot recommend this TV for critical viewing and would suggest that if you demo this TV, you spend time looking in a realistic surrounding and not a showroom. The auto dimming feature would not have caused us any issues had it been defeatable. But because we cannot switch it off it just completely ruins the TV experience. And this is a shame as LG have been building up a good head of steam lately with some excellent TVs and technology. But hey, we are all allowed to drop the ball on occasions and sadly the LF7700 is such a product for LG. Disappointing.