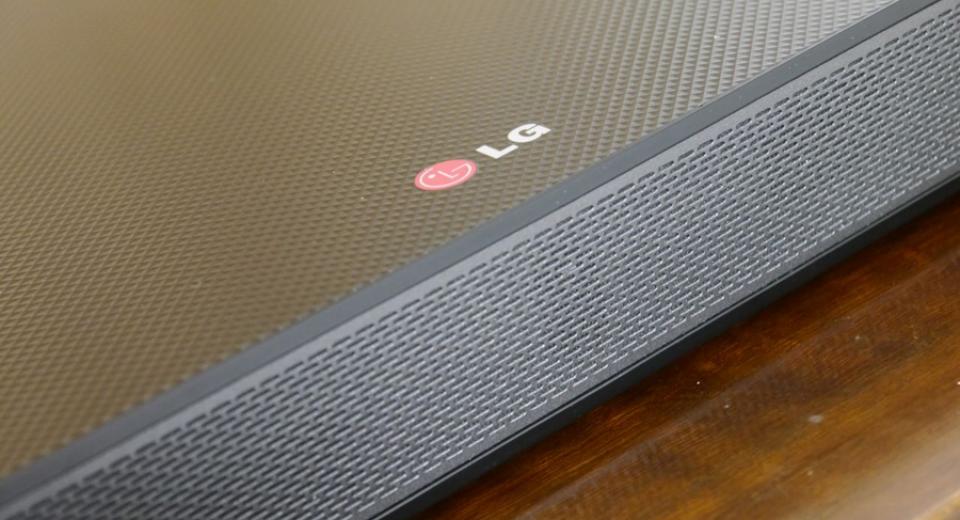 Evolution is an amazing process, things adapt to changing circumstances and those best suited to the new environment survive.

No sooner had soundbars dominated the market like the AV equivalent of the 'Cambrian Explosion', then some bright spark thought about putting it below the TV instead of in front. Thus the soundbase or sound plate, depending on the manufacturer, was born. There's some logic to this evolution of the soundbar - by putting it under the stand it doesn't block the TV's infra-red receiver and the larger surface area allows for more speakers and a sleeker chassis. In addition, by sharing the same footprint as the TV itself, the soundbase also takes up less space and is more discrete.
It isn't a perfect solution of course, you can't use a soundbase with a TV whose stand extends across its entire length and, if your screen is particularly large or heavy, it might preclude using one as well. However, it does present a tidy solution to poor TV sound and will appeal to those put off by multiple speakers and excessive cabling. It's a hostile environment though, with a large number of manufacturers recently launching soundbases of their own. Joining the fray is LG with their new LAP340 SoundPlate, which promises 4.1-channel sound without the attendant clutter. Let's see...

Since the entire raison d'être of the soundplate is to sit beneath the TV and remain discreet, the design isn't intended to draw attention to itself. However this hasn't stopped LG from giving the LAP340 a splash of style and it's actually one of the better looking soundplates that we've seen. The black and grey finish is both understated and tasteful, the curved edges make for an attractive design and the moulding gives the chassis an interesting texture. The build quality is excellent, which is just as well if you're going to put a TV on top of the LAP340.

At the front there is nothing but a speaker grille and a LED indicator light, whilst at the sides there are more speaker grilles and bass ports for the built-in 4 1/3" subwoofer units. Along with these two subwoofers, there are four 2 3/4" full range drivers, two forward firing and two side firing. The chassis is 35mm high and the top panel has a surface area of 700 x 320mm, which LG claim can handle a TV of up to 55 inches and a weight of up to 38kg. Of course, whether the LAP340 will be suitable for your TV won't only depend on the screen size and weight but also the type and size of the stand. At the rear there are some basic controls including on/off, an input select and volume up and down buttons. There is also a switch for selecting auto power on or off and a socket for a two-pin power cable. The only other connection at the rear is a single optical digital input. This is disappointing and, considering the price of the LAP340, not even including at least one HDMI input/output is a major omission. There are soundplates available from competitors for less money that include multiple HDMI inputs, so LG's decision is not only strange but rather limiting.

Of course, the LAP340 also includes Bluetooth, so you can stream audio from compatible devices and, if you own a suitably equipped LG TV, you can also use their SoundSync system to stream the audio from the TV wirelessly. This could be handy if your TV is wall mounted and you can also control the volume on the LAP340 using your TV remote control. The SoundPlate does come with a remote of its own and whilst the controller is rather small and simple, it gets the job done. There are buttons for on/off, volume and mute, whilst you can also select the input (optical, Bluetooth, LG TV) and turn the Cinema Sound feature on and off.

The LAP340 only has a single optical digital input, which seriously limits the connection options.

Setting up the LAP340 couldn't be easier, you just position it beneath your TV and plug it in. Actually we say that but in our case, it was a bit trickier than that because our Pioneer Kuro plasma was too heavy to put on top of the SoundPlate. LG had sent the review sample along with their 55-inch OLED TV but that has a stand that isn't compatible with the SoundPlate, so we had to improvise a bit in terms of placement for our testing. Still at least having a LG TV available meant we could test their SoundSynch system and wirelessly connecting the SoundPlate and the TV using this feature was very quick and easy.

Otherwise you're restricted to using the optical digital output on the TV and connecting it to the optical digital input on the LAP340 - LG actually provide an optical digital cable for the purpose. The only other option in terms of connections is using Bluetooth to stream music from your mobile device or computer. Depending on how you setup the LAP340, the LED indicator on the front will change colour to inform you of what is connected and if the Cinema Sound feature is on or off. Although to do this, the LED uses red, green, orange and white colours and flashes in different combinations which can be hard to remember.

This first thing that is worth noting about the LAP340 is that despite its slimline proportions, it is capable of delivering a surprisingly big sound. This is no doubt due to the four drivers and two subwoofers crammed into that sleek chassis, along with 120 watts of total power. As a result the SoundPlate can produce a very wide front soundstage, with good stereo separation and a decent amount of immersion. The side firing speakers certainly help here but the LAP340 doesn't lose focus and is still capable of retaining a cohesive presence, with careful positioning of effects and instruments. The level of detail was equally impressive and dialogue was nicely anchored to the middle of the TV image.

There was also plenty of bass energy, making the LAP340 ideal for movie soundtracks, especially those that make extensive use of low frequency effects. The car crashes in Fast and Furious 6 hand plenty of visceral impact, whilst the sound of Jaegers and Kaiju fighting it out in Pacific Rim delivered a bone-crunching low-end. The downside to all this grunt is that the subwoofers had a tendency to dominate sound mixes and this was especially evident in dialogue heavy programming. At times the LAP340 could be rather overbearing, especially at higher volumes, resulting in muddied dialogue. The SoundPlate would certainly benefit from careful placement, as the surface it sits on and its proximity to the rear wall will affect the bass performance. The LAP340 had no problems pairing with our various Bluetooth devices and listening to music was a very enjoyable experience, with the LG capable of delivering a great sense of stereo separation and some excellent imaging of instruments. The SoundPlate could fill the room, creating quite an immersive front soundstage that had both clarity and detail. The higher frequencies were well represented and the lower end was powerfully reproduced but, as with movie soundtracks, the higher the volume the more the bass dominated the performance, especially in the mid-range. The result was a forceful performance that many will like but some may find too imposing, especially on acoustic tracks or more subtle arrangements.

The Cinema Sound feature managed to give audio a greater sense of scale and immersion, without introducing unnecessary echo or delay, so in that respect it is one of the better implementations of this kind of processing. However, given the already imposing presence of the LAP340's sound, the feature really wasn't required and tended to result in a bass performance that was just too excessive. We found that for the most integrated and measured performance it was best left off. The SoundSync feature worked well, providing a robust wireless connection that was easy to create and control. There appeared to be no issues in terms of compromising the sound quality and whether you choose optical, Bluetooth or SoundSync, the results should be the same.
The LAP340 could deliver a big and bold soundstage but at times it could overpower the sound mix, especially dialogue.

The LG LAP340 SoundPlate is an attractively designed and well built example of this new and fast developing product type. There are two subwoofers and four drivers crammed into its sleek proportions, with a total of 120 watts of power. As a result the LAP340 can deliver a discrete and effective solution to the problem of poor sound on modern TVs. The SoundPlate could produce a big and imposing soundstage, with plenty of width and immersion. However it was also able to do this whilst retaining both clarity and detail, creating a cohesive sound with a real sense of integration. The bass performance was very powerful, lending itself naturally to modern film soundtracks with plenty of low end effects, although the LAP340 also handled music well.

However the bass could, on occasion, be rather overpowering which resulted in it dominating the rest of the frequency range. This was especially true at higher volumes, where the intelligibility of dialogue could suffer and we would recommend careful positioning to mitigate excessive bass energy. The only other area where the LAP340 struggled was in terms of its connections. If you want to listen to music you can pair the SoundPlate with a Bluetooth enabled device and if you own a suitably equipped LG TV, you can wirelessly stream audio using their SoundSync feature. However, the only wired connection is a single optical digital input and, considering it costs over £300, this will put the LAP340 at a serious disadvantage to some of the competition. The LG LAP340 SoundPlate has a lot of strengths but it also some weaknesses that might affect it in a market segment where only the best adapted will survive.