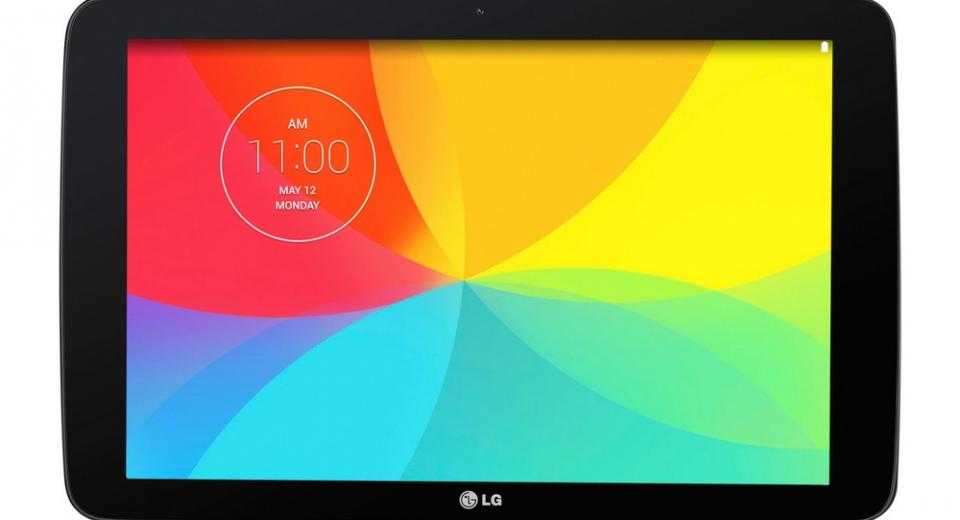 We don’t think LG would mind too much if we label this as a budget Android tablet because with current prices (March 2015) having dipped below the £200 barrier, that’s certainly prospectively excellent value for a slate with so much screen real estate. LG also manufactures the G Pad in 8.3 and 7-inch variations and each have colour options of black or red casing.

There’s a slightly rounded look to the G Pad 10.1 and it feels relatively heavy in the hands, especially having come directly from the feather-like Amazon Fire HDX so it’s definitely not one we could use in one-handed fashion for any prolonged period of time. The build quality feels fine for the price-point and the rear of the casing is pleasantly soft and smooth. The bezel surrounding the display is relatively thick but that’s a fair reflection of the fact its likely to be used in both hands. The screen, itself, sports a 16:10 aspect ratio, atop of which (landscape orientation) is the front-facing camera. Above and to the left of the camera, there is the power button and volume rocker. The rear-facing camera is situated close to where your left index finger would naturally sit, which can obviously make taking photographs more awkward that it needs to be. The left edge houses the 3.5mm headphone/audio out jack and below that is a flap where you can insert a Micro SD card to expand the built-in storage. Just further down is the mini USB port, used for charging and PC connection, whilst the built in stereo speakers reside on the right and left of the rear casing, towards the bottom. One of the most unusual features of the G Pad is its infra-red emitter which can be used to remote control your TV but more on that later.

This isn’t exactly a beast on paper, but then the price-tag never suggested it would be. The G Pad 10.1 comes pre-installed with Android 4.4.2 and runs from a modest 1.2GHz Qualcomm Snapdragon 400 CPU and Adreno 305 graphics processor. There’s 1GB of RAM, and 16GB of internal storage that can be expanded by a further 32GB by microSD. The IPS display features a fairly lowly 1200 x 800 screen resolution, whilst the WiFi capability supports 802.11 a, b, g, n @2.4/5 GHz with WEP, WPA or WPA2 encryption. Bluetooth is low power Version 4.0, which is good news for those that like to stream their audio that way.

The G Pad 10.1 features a few genuinely useful additions to the Android OS. Seeing as is this is AVForums, we’ll start with the pre-installed Quick Remote app which utilises the infra-red emitter on the top edge of the tablet. You simply open up the app, point it toward the IR sensor of your TV, choose the relevant manufacturer and then test if the controls are working. We found it to work first time with both a Panasonic and Samsung TV but you may need to run through it a few times for it to find the right IR code. The LG launcher doesn’t really deviate too much from the stock Android version and we really like LG’s implementation of recent apps, which produces a large tiled screen, rather than the series of smaller thumbnails you’re probably used to seeing. Dual view is also very handy enabling, as the description would suggest, two apps to take up the screen real estate to what ever degree you choose. We’re not so keen on the ‘Knock Code’ security layer which lets you tap out user designated patterns to unlock the tablet as it can be intermittently unresponsive. Finally, Q Pair which, again, is hardly a new concept, is nonetheless a useful built-in feature. You’ll need to download the corresponding app to your (Android) smartphone and, once that’s done and the two are paired, you will then get easy access to messages and call and social media notifications, straight on the tablet.

Using Calman’s new MobileForge app (free on Google Play) together with their Colour Checker PC software, we were able to fully test out the accuracy of the built-in IPS panel and the results were a mixed bag. Whites are OK, with just a tendency to be blue-grey and the brighter end of the spectrum was also reasonably accurate but the deeper shades of red, blue and magenta were quite under-saturated, compared to the sRGB targets; in the case of the former two, they were quite off hue, as well, but it’s serviceable enough for day to day use. It is generally accepted that delta Errors below 3 are imperceptible to the human eye and with the ‘Colour Checker’ readings – which measure a range of common hues – we can see that the average errors are standing at 5.5, which is definitely an acceptable overall performance. The display can go reasonably bright, also, with a peak luminance of 342cd/m2 so it’s usable outdoors, although the anti-reflective coating could be better. We recorded a black level measurement 0.408 cd/m2 which is also decent and results in a contrast ratio of around 840:1. Most of the colours are reasonably accurate but blue and red are well under-saturated
Neither of the on-board cameras are anything to get carried away with. On paper, the rear-facer is billed as 5MP but unless lighting is ideal, images are far from sharp and can suffer with unpleasant noise, there is no built in flash to help out here. The auto white balance settings are reasonable, however, so colours look fairly natural and there’s a panorama mode that works OK but its not easy keeping a 10-inch tablet steady as you’re panning around. The video camera can operate up to 1080p at 30 frames per second but it produces even less impressive images than the stills so it’s not going to replace your camera. It doesn’t take a bad selfie, we guess, with a feature where the resolution is lessened and the screen glows bright in order to improve the lighting.

To their credit, LG includes a pair of stereo speakers built into the rear casing of the G Pad. They’re sensibly positioned at a lower-mid position, when the tablet is in landscape orientation, so the sense of separation is passable when watching TV shows or movies. Obviously, given their small size and low power output, they’re hardly what we’d describe as dynamic or room-filling but neither do they particularly distort or offend. You’d be much better served with a decent set of head/earphones, of course, or even pairing it to a compact Bluetooth speaker. The headphone output is, again, not exactly spine chilling but it made a reasonable fist of driving our Audio Technica ADT-900s, although they couldn’t get them as loud as we’d like. Bluetooth performance was good but we’d have preferred aptX support, although the fact the G Pad runs Version 4 is definitely a bonus as power consumption when streaming is very low…

…Speaking of power consumption, this is an area where the G Pad 10.1 really impressed. Just operatingthe G Pad in general use, we didn’t need to recharge in nearly 4 days, which is pretty startling. In more formalised testing, we ran a YouTube video at maximum available resolution, at a screen brightness of 50%, the G Pad managed a hefty 12hrs and 13mins, which is more than enough juice to satisfy most. Clearly, all the available space within the G Pad 10.1 allows for a good sized battery and the 8,000mAh capacity is probably the standout feature of this tablet.

Outstanding battery life is arguably the standout feature of the G Pad 10.1

In raw performance terms, the G Pad has no chance in reaching the levels of recent tablets we’ve covered. Comparing the Antutu overall benchmark score against, say, the Fire HDX 8.9, we see the Amazon slate score 47,963 in comparison to the LG’s 11,108 which, while not telling the complete story, is reasonably indicative of their comparative performances. The G Pad can be somewhat sluggish when you have more than a handful of apps open, where the Fire HDX was not. Looking at the Passmark scores and the G Pad 10.1 receives an overall points total of just 2,380, against the 5,506 of the HDX, the 6,412 scored by the NVIDIA Shield Gaming Tablet and the 5,841 garnered by the Samsung Galaxy Tab S 10.5. These are higher end devices, of course, but it gives one a proper perspective that we are operating at the mid-low end here.

All that said, if your needs are relatively simple – a spot of social networking, web browsing and a bit of Candy Crush, perhaps, then you’ll likely be more than happy with the G Pad. Perhaps the thing we disliked the most was the relatively low resolution of the screen. A pixel count of 1200 x 800 (WXGA) might cut it at 7-inches but it’s too much of a stretch for 10.1”. Text can look ragged and some of our favourite games rendered less palatable thanks to very low res textures, jagged edges and some slowdown when many objects were on-screen. The muted colour palette also means we’d be looking elsewhere if we were looking for a portable movie watching device but, as we said above, for less specialised uses, it will tick along just fine.

If you’re looking for budget tablet with a large screen size, you could certainly do worse but there’s little to get inspired about here. It runs most things well enough but the occasional sluggishness in response and lacklustre display makes us think we might just be inclined to downsize slightly for an all-round better experience. Some of the built-in LG user interface innovations and exclusive apps are good but, otherwise, it does little to set itself apart from its hordes of competitors – bar an excellent battery life which makes it great for travellers. It’s a solid enough device but you might well be inclined to wait for a higher-specced alternative to go end of line and cash-in on its discounted price.

What Else could I Consider?

You’re certainly not short of alternatives in this particular marketplace. The Samsung Galaxy Tab 10.1 is priced pretty much the same, for one, and for a little more outlay you could treat yourself to the NVIDIA Shield Tablet, which outshines the LG in just about every department bar screen size. As we alluded to above, however, at this time of year there are many products coming to the end of their lifecycle so we’d be tempted to scour the net for a bargain!