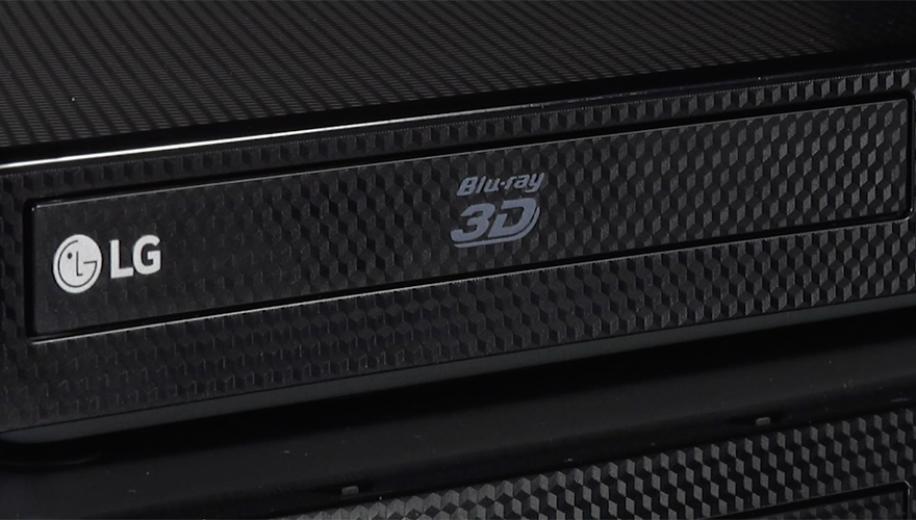 The LG BP556 is the latest Blu-ray player from the company and is the step-up model from the BP550 that we have reviewed previously. The BP556 looks identical to the BP550 and offers the same features, making the player more of a refresh than an upgrade. However it does pack a lot into its diminutive frame including 2D and 3D Blu-ray, DVD and CD playback. It also features video streaming, a private sound mode and support for LG's MUSICflow multiroom system. The BP556 can be picked up for just £85 as at the time of writing (February 2017), making it a potential bargain – so let's find out. The BP556 looks identical to the earlier BP550 with the same reduced size chassis that measures 270 x 43 x 195mm (WxHxD) and weighs in at 0.87kg. As you can imagine at this price point, the build quality is mediocre and the BP556 does feel very plastic. There's also very little in terms of the front display and controls, in fact there's no front display aside from a small green LED light to show the player is on, and the only controls are on the right with a large power button and an eject button. The BP556 has a textured effect on its chassis that saves it from being a completely uninspired matte black box but otherwise there is little in terms of any design flair. The player is utilitarian to say the least and aside from the aforementioned controls, the only other items on the facia are a USB port for media playback via connected devices and the disc tray. The tray itself is fairly smooth moving in and out, if a little noisy, but the player is reasonably quiet in actual operation.
The design is simple, the build quality is basic and the front panel is minimalist Aside from the USB port at the front, all the other connections are at the rear and it's stripped down selection with a single HDMI output, a coaxial digital output and an Ethernet port. The inclusion of a coaxial digital output is surprising, especially considering most devices us an optical digital connector these days, but at least it offers an alternative to the HDMI output. The BP556 has built-in WiFi but you may prefer to use the wired connection if you plan to stream a lot of high definition video content. At the rear there is also the connector for the included AC power adapter. The included remote control is fairly decent, with a sensible layout and all the buttons that you'll need to effectively control the BP556. The remote fits comfortably in the hand and there's a groove on the back for your finger. There are centrally mounted navigation buttons and playback controls above those, whilst you also get some basic controls for your TV. It isn't the best remote control we've ever used but we've definitely seen far worse at this price point and even on more expensive players for that matter. If you're the kind of person that uses their smart device for everything, there's also a handy free remote app for both iOS and Android.
There's a stripped down set of connections but a surprisingly effective remote control Aside from playback of 2D and 3D Blu-rays, the BP556 can also playback and upscale DVDs and playback CDs. Thanks to the USB port on the front the LG can also playback videos, music and images from any connected device. The BP556 also supports LG's MUSICflow multiroom system, allowing you to cast audio from the player to any MUSICflow speakers in the house. There's also Private Sound Mode 2.0, which allows you to send the audio from the player to your smart device via Bluetooth, so that you can listen with headphones and not disturb the rest of the family.

The Home screen includes a Premium section where you'll find a selection of all the main streaming apps, including Netflix, Amazon Video, YouTube, NOW TV, BBC iPlayer and Spotify. That should be enough for most people and is extensive enough to even shame some dedicated media streaming boxes. There are also sections for Movie, Photo and Music which can then access connected USB storage or other devices on your network for DLNA playback. In terms of file support, the BP556 can handle MP3, WMA, AIFF, AAC, MP4, m4a, WAV and FLAC. The menu system of the BP556 is simple to use and clearly laid out, making setup very easy. The Settings menu can be accessed from the Home Screen and contains six submenus - Network, Display, Language, Audio, Lock and Others. When setting up the player you'll need to choose between 1080p24 or 1080p50 in the Display submenu because there's no Auto mode. We'd recommend selecting 1080p24 for most content but the rest of the options can largely be left at their default values.

There's also the Info/Menu button on the remote control and when you press this you'll find the Option menu which includes Title, Chapter, Time, Audio, Subtitle, Angle, TV Aspect Ratio and Picture Mode. In the case of the latter we would recommend selecting either Standard or User, both of which leave the image unmolested, but don't be tempted to fiddle with the Contrast, Brightness, Colour and Sharpness controls, those should be adjusted on your display.
There are plenty of features, including support for MUSICflow, whilst setup and operation is easy

As long as you stick to the Standard or User picture modes the BP556 can deliver a perfect image with Blu-ray, which is just what we'd expect. It's a digital signal, so as long as the player isn't manipulating it in some way, then the image will be exactly what's on the disc. That's why you shouldn't use the Vivid or Movie picture modes, they both adversely affect the colours and the gamma of the image, but if you choose Standard or User you'll get pristine high definition images. The same was true when it came to 3D Blu-ray, with the player outputting the images exactly as they were on the disc, with all the depth and spatial cues intact.

Whilst we fully expected the BP556 to output a pristine image with both 2D and 3D Blu-ray, it’s not always the case when dealing with lower resolution content. However, the BP556 delivered an excellent performance with standard definition content from DVD discs, thanks to great scaling that resulted in detailed images that were free of ringing or other unwanted artefacts. The player also showed competent deinterlacing capabilities in our testing, delivering 1080i images with only minimal jagged edges visible during motion test patterns and actual content.

The performance with the various video streaming services was also excellent, with both Netflix and Amazon Instant looking particularly impressive. In fact the BP556 could double as a highly capable video streaming device with the ability to playback discs as an added bonus. Our only complaint would be the lack of automatic switching when it comes to different frame rates but we guess you can't have everything for £85! The disc loading times were perfectly acceptable, with most titles reaching their menu screens in just under 30 seconds and in operation the player was generally quiet despite the plastic construction.

The LG BP556 is a great little Blu-ray player that delivers in all the important areas. Yes it isn't a looker and the build quality could be better but it's easy to set up and simple to operate. The 2D and 3D playback is excellent and the BP556 also scales up DVDs very effectively. There's a decent selection of features including all the main video streaming services and if you have any MUSICflow speakers it can stream audio to those as well. There's very little it can't do and at just £85 it's a steal, making the LG BP556 an obvious candidate for a Best Buy badge. In fact it's hard to even think of good alternatives at this price, which simply reinforces its status as a real bargain.