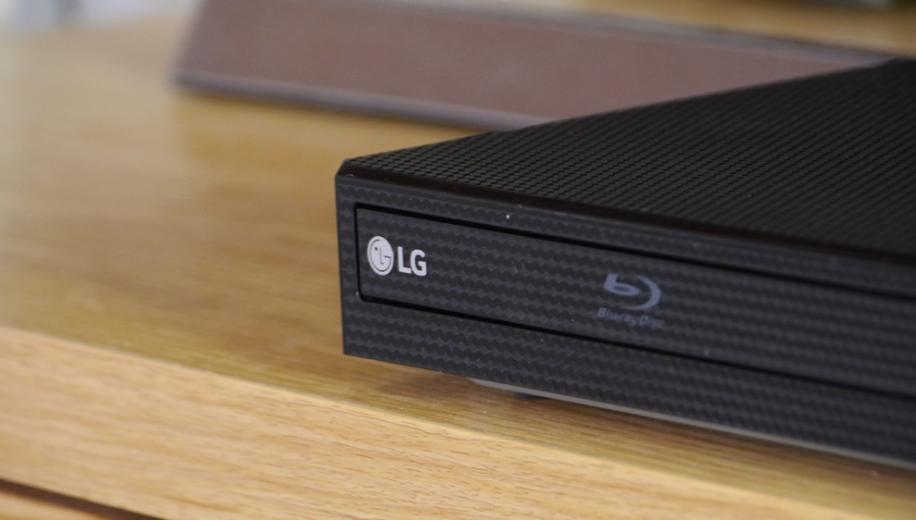 This is a staunchly mid-range Blu-ray player from the LG stable and at the time of publishing (July 2015) commands a retail price of just under £100. The BP350 features built-in Wi-Fi capability but has no 3D support and it appears the sub £100 market in 2015 presents you with the choice of one or the other. To take advantage of the Wi-Fi, the BP350 also boasts a range of built-in streaming apps and it also comes Music Flow (LG’s multi-room audio solution) ready. With Ultra HD Blu-ray just around the corner and a well-established market, this player needs to perform all of its advertised features without issue; let’s see if it does.

Unsurprisingly this is a rather unremarkable looking device. The BP350 is very lightweight and the tray loading disc mechanism is far from the quietest, in terms of when it is in seek mode, but you shouldn’t be able to hear it during playback, unless you’re sat right on top of it. The black plastic casing carries a textured look all over and there are a couple of discrete buttons – power & eject - just to the right of the disc tray. There’s no real visual display panel but there is a green LED which illuminates when the device is switched on.

The supplied remote control is a bit on the cheap and tacky side with old-school rubberised buttons that are too small for all but the thinnest of digits, but at least its low powered, requiring just 1xAAA to keep it ticking over. LG, no doubt, would prefer you to use your phone or tablet as a means of control, using the LG AV Remote app for iOS or Android, but that’s not always the most convenient option. ‘It works’ is about the best we can say of it. We don’t think we’ve seen a Blu-ray player with less connectivity options than the BP350; there’s an HDMI port at the rear alongside the DC in for the external power supply but, other than a front-mounted USB port, that’s your lot. That’s not a criticism, as it should be sufficient for most setups, but something to be aware of if you have plans to hook up a soundbar or AVR/AMP without HDMI connectivity.

Most of the Smart TV functionality centres around the Premium section of the homescreen, where you’ll find a nice selection of streaming apps available. There aren’t loads but we’d rather quality over quantity and the selection includes NOW TV, BBC iPlayer, Netflix, Amazon Instant Video, YouTube and Spotify so it certainly had almost all my key services on offer and streaming quality was very good throughout. There are also tiles for Movie, Photo and Music which can then access connected USB storage or other devices on your network for DLNA playback. To be fair, you could almost justify the asking price simply for the app coverage – very few devices boast NOW TV, Amazon and Netflix under the same roof – and file type support is excellent, particularly over USB where it played every video we could find bar some 4K files, naturally. Like the design and connectivity options, the UI and Menu presentation is very simple and clean. The Settings Menu is broken down in to six submenus which are very easy to navigate but we’re curious why the Display Menu doesn’t have an Auto setting for 1080p24, only choices between that and 1080p50. Most players do provide that so we’re not sure why LG doesn’t and unless the end-user is savvy enough to detect the added judder and then work out it could be fixed in the Menus, they won’t be getting the most out of their Blu-ray collection. In actual fact, if you don’t select 24Hz as the 1080p Mode, it will show 24p content at 60Hz, which is very confusing but the rest of the options are fairly safe at default values.

The BP350 delivers almost everything you would want from a Blu-ray player, unless you’re in to 3D. Disc load times are good, with most reaching the disc menu in comfortably under 30 seconds, depending on the amount of BD-Live content on the disc. You can shave another few seconds off that buy disabling BD Live in the Settings Menu, too.

You can also, should you wish, make some picture altering adjustments found under ‘Options’ after hitting the INFO/MENU button on the remote during disc playback and we’re glad LG hides them here rather than in the main menus. We’d have preferred it more were there no options, at all, as the default ‘Standard’ Picture Mode gives you exactly what you want, i.e. totally faithful representation of what is on the disc. The Vivid and Cinema modes mess with colours and luminance in an unnecessary way and are to be avoided. The User mode displays exactly as per Standard but offers you basic picture controls, including Contrast, Brightness and Colour, which might just be useful to a professional calibrator. Where a player can add a bit of worth, as far as disc playback is concerned, is with your standard definition DVDs or those rare Blu-rays provided in interlaced format. In both cases, the BP350 delivers with an excellent scaling engine complemented by solid film cadence detection and typically very competent deinterlacing capabilities. A good test for the handling of interlaced Blu-rays is the Stevie Wonder: Live at Last disc and you can see by looking at any stringed instruments in the band that fine lines and details are retained by the BP350 under movement.

As alluded to above, the performance with the built-in streaming services was also very good, with each of Netflix, Amazon Instant and BBC iPlayer available in their maximum available resolutions - discounting 4K, that is. The YouTube app, like many, is restricted to 720p, however, and unlike with locally streamed media, there is no framerate detection present for the streaming services; there’s nothing unusual in that in the Blu-ray and media streaming player market but perhaps it’s about time the manufacturers started building in this facility. For those interested in the BP350 as an international Netflix player, you can change DNS settings in the menus...


If 3D Blu-ray isn’t needed and you’re looking for a budget player that simply gets the job done, then there are worse ways of spending your £100, or so. The build quality isn’t anything to write home about; there’s only a single HDMI connection for both video and audio and the remote is pretty poor but these are probably non-issues for the vast majority. On the plus side, the BP350 provides faultless Blu-ray playback as well as its excellent handling of standard definition DVDs. The LG is also a very capable media streaming device for sources both web-based and local. It boasts Sky’s NOW TV, Amazon Instant and Netflix all under one roof – and very few devices can claim that in the UK – as well as packing in BBC iPlayer, Spotify, Deezer and more. In fact you could almost justify the asking price based on the streaming capabilities, alone, but that combined with its obvious strengths as a disc player mean it’s a sure fire AVForums Recommended Award winner.


For slightly less money than the BP350, and with 3D playback capability built-in, the Sony BDP-S4500 is a pretty decent option, although it has no Wi-Fi capability. Alternatively, the Panasonic DMP-BDT170EB is currently (July 2015) doing an end of line tour and is a similar performer to the BDT360.