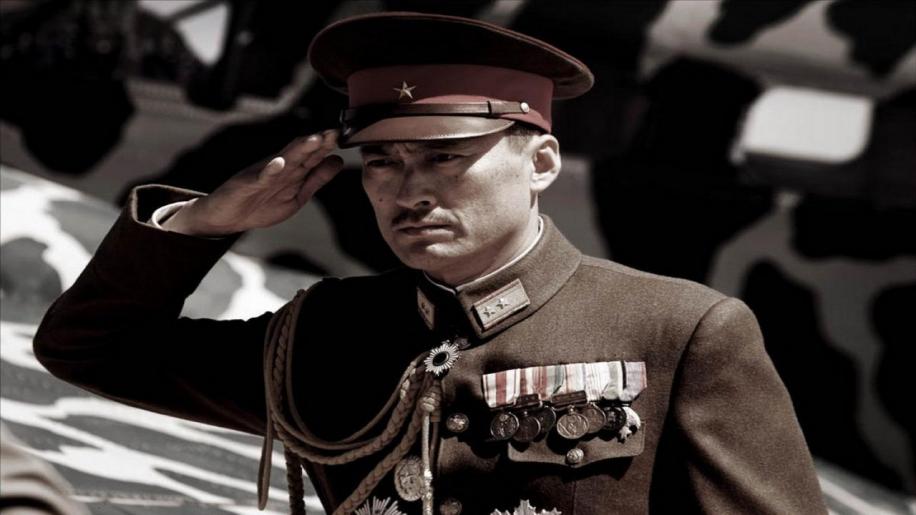 “We soldiers dig. We dig all day. This is the hole that we will fight and die in. Hanako, am I didgging my own grave?”

Expected to last for no more than five days, the poorly-provisioned Japanese defenders of the sulphuric, inhospitable chunk of volcanic rock in the South Pacific, called Iwo Jima, and their acceptance or denial of an assured honourable death in the face of an overwhelming American invasion force, form the emotional core of Clint Eastwood's second production covering the same, tide-turning battle of World War II. Shot back to back with the US propaganda de-mystifyer, Flags Of Our Fathers, Letters From Iwo Jima takes us deep into the trenches, foxholes and tunnels of the determined Japanese army, and even deeper into the psyche of soldiers who knew they were doomed before the American fleet had even swept into view. It is a bold undertaking from one of the most acclaimed actors-turned-directors around today and, to my knowledge anyway, the first time that anyone has told such a story from the two opposing sides' points of view. Eastwood was already totally invested in making his more commercial, more standardised account of the conflict when his own personal interest in the saga found him taking onboard the personal account of it as written down by courageous Japanese Lt. General Kuribayashi in letters he was not lucky enough to have sent home - they were found during excavations of the site many years later. Realising that he had untapped a distinctively new and unique slant on the same material, he couldn't resist committing this mirror-image story to the screen as well ... the two films sort of an Iwo Jima through the Looking Glass.

It was a gamble that paid off, with critical acclaim for both films and even awards for Letters From Iwo Jima, which is, unquestionably, the superior treatment of the two.

Shooting the movie in Japanese and bleaching his film stock until the finished print looks almost black and white, Eastwood maximises on atmosphere by adhering to the hellish conditions that the Japanese lived, fought and died under. The very film seems to give off a poisonous fume, and scenes of Ken Watanabe's Kuribayashi wandering across the ashen slopes make the location appear distressingly alien. Digging foxholes and gun emplacements and carving a labyrinth beneath the black-caked hills, the beleaguered troops - amongst them conscripted baker Saigo (the wonderful Kazunari Ninomiya), ex-military policeman Shimizu (Ryo Kase), former Olympic medal-winner Baron Nishi (Tsuyoshi Ihara) and hard-line lunatic Lt. Ito (a fiercely belligerent Shido Nakamura) - settle down to await the formidable American fleet. All they have to do is hold the yanks back for as long as they can. No-one, least of all themselves, expects to get out of there alive, and the film's main impetus is to study the differing profiles of each soldier - be they decorated hero or reluctant draftee dragged away from home, and in Saigo's case, from a pregnant wife. Harassed by officers hell-bent on honourable sacrifice, continually shelled by the enemy, choking on the dust of bullet-riddled black sand and forced to run for their lives from one blighted, corpse-filled cave to another, the defenders have no choice other than to succumb to the usual war-is-hell movie clichés. Some seek solace in friendship, others in memories of more languid and fun-loving times, others let the red mist of violence cloud their judgement and all must confront the barbaric horrors of a war that soon ceases to offer any sense of nobility.

But, even as Eastwood's tale rather erroneously portrays the only compassionate Japanese officers as being those who have spent time in America - with Nishi actually able to fondly recount his high society days in LA for a wounded G.I. they have captured - the basic concept of us all being able to display both good morals and wanton cruelty from one moment to the next is more than competently handled. The thing is, there is nothing new to be found here as the vogue for realistic re-interpretation has been employed effectively for years now in everything from Dances With Wolves to Kingdom Of Heaven. Even the likes of Sam Peckinpah's cultish Cross Of Iron took those who were ostensibly the bad guys - the Germans - and turned them into heroes we could root for. Thus, seeing things from our enemies' side of the fence is nothing inherently original.

“Not one of you is allowed to die until you killed ten enemy soldiers. Do not expect to return home alive.”

But where Letters triumphs over Flags is in character and emotion. The Japanese depiction of Iwo Jima is no less patriotic, but the sentimentality revealed herein feels much less contrived, and far more natural, more understandable. A ragtag gaggle of war-torn soldiers gathered around the body of a fallen enemy, listening to the last letter he received from his mother sings loud and clear the true emotions of all combatants when faced with the unsavoury business that they are all, unavoidably, involved in. Painful memories - of dinners and awards, of a bizarre canine execution - are hauntingly woven into the quieter moments and, over all, Ken Watanabe's towering presence dominates - the eye of the storm, he effortlessly brings dignity, pathos and humanity to the role. Check out the great, though slightly mad, scene in which he has a lackey charge about the black beach as he works out how best to arrange his defences, whilst taking imaginary pot-shots at him with a walking stick. The soft and lyrical score from Kyle Eastwood works lulling and mysterious wonders, as well. And the many scenes set down in the darkness of the man-made caves and tunnels are like whispery voyages into the shadows of the mind. Hope, anger and desperation all merge as the Yanks scramble ever closer.

Some scenes are excruciatingly revealing and as cruelly sharp as a scalpel: the battered, shell-shocked remnants of fleeing units blundering through tunnel entrances and meeting nothing but scorn and hostility from their fellow commanders for having deserted their positions; an over-the-edge officer hiding amongst a sea of corpses with grenades clutched to his chest; the incredible hand-to-hand skirmish in the dead of night; and a final, futile, shovel-swinging act of defiance. Some frames are actually either the same as in Flags, or the reverse of them. Although no cast member appears in both films, there are moments in this that connect directly to incidents seen in its alter-ego. Chiefly amongst them is the crucial bit where Ryan Phillippe's Doc discovers the ensuing carnage in a cave after a squad of defenders have committed explosive hari-kari. On this topic, it is rewarding to see that Eastwood bleeds dry the notion of honourable sacrifice, and bushido, by refusing to grant it any idealised glory. The kamikaze ethic is therefore, shown up for what it really during the mass-grenade suicide - a useless abandonment of all hope rather than the ultimate show of pride. Those who go through with it are usually shrieking in guilt and rage, whilst others, Saigo particularly, will go to any lengths in order to escape such a predicament.

All of this grim, yet eloquent tone is rather let down with the heavy-handed capture of American Marines, with both occasions coming across as either crass or clichéd. The first is classic knee-jerk stuff, appropriate given the circumstances but much too familiar a set-up to be effective, or to actually say anything about the corruption of behaviour in such a situation. The second, in which some degree of mutual understanding is forged, is actually worse because it seems only to enhance the American viewpoint all the more, in that the most sensitive Japanese soldier is revealed to have lived in California and, therefore, finds it easier to reach common ground. The sequence would have been more poignant and effective for me if Nishi was just showing compassion for a fellow human being - and one whose language he couldn't actually understand in the first place.

Thus, whilst Iwo Jima is a better film than Flags Of Our Fathers - which, incidentally, bored me to tears - because it is more thoughtful and less saccharine in its approach to the same conflict, it still leaves me vaguely unsatisfied. Just when the action begins to heat up, Eastwood scampers back into the psychological foxhole to mull things over for a while. I can't help thinking that one great movie is lurking in-between two well-intentioned but, ultimately, indifferent ones, the fog of war, perhaps, obscuring the deeper, more heartfelt message that is struggling to lift its head above the trench. Eastwood does, however, deserve much kudos for tackling the project in such a two-pronged manner, literally capturing his subject matter in a pincer-move, outflanking any accusation of bias with his both-sides examination. But, when viewed together, it is clear that Flags deviates too much from the main thrust of what really matters - the actual blood and guts of Iwo Jima, itself - since the battle to take the island provides such a fine, rich tableau to explore without the American standpoint becoming so cloyingly bogged-down by the politics and mythology of its aftermath. But, the end result, from either side of the coin, is still a fascinating one. As a filmic project the two productions cleverly entwine, yet never repeat or rehash and, together, pay a fitting tribute to a battle that seems as strangely futile as it does momentous. Clint Eastwood remains a remarkable filmmaker taking on concepts and stories that continue to push and challenge him - with is something that the majority of directors less than half his age cannot say.

Letters From Iwo Jima comes as recommended antidote to the more high-profile Flags Of Our Fathers.