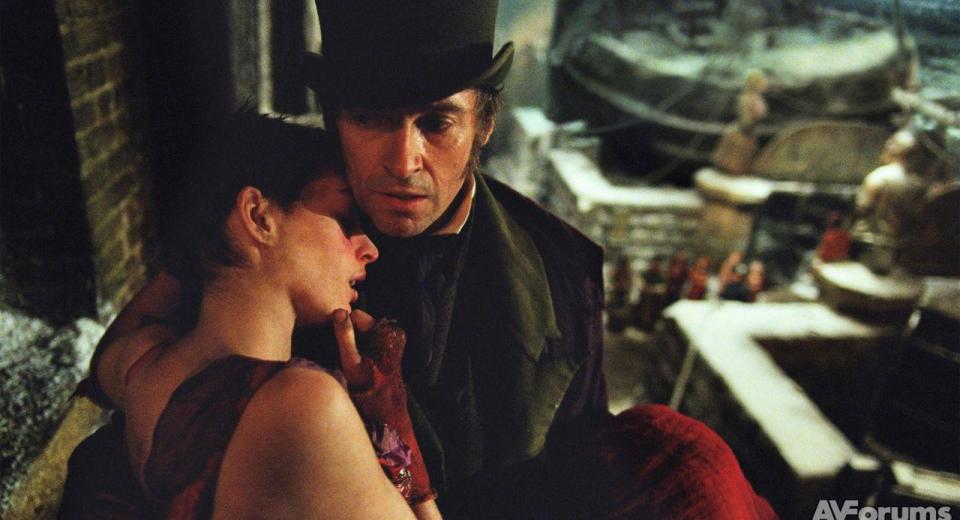 Musicals have sometimes had a rough ride when it comes to movie adaptions. They can become shells of their former selves, or more usually, simply a glorified version of the stage version, with very little extra setting, just an increased stage area. Gale Edward’s Jesus Christ, Superstar from 2000 is one such movie, where a stage production was quite successfully captured on video. I only mention it, as a new cinematic version is due out in 2014 and no doubt will be compared to this production of Les Miserables. Boy, it had better be good, because this one is a stunner.

For those that missed it at the cinema or have never seen a live production, the story is set in Post-revolutionary France. Jean Valjean (Hugh Jackman) is a prisoner, released on parole and who then absconds. He is pursued by Javert, (Russell Crowe), but escapes justice long enough to become a wealthy philanthropic man. Valjean fires Fantine, (Anne Hathaway) a troubled young woman from his factory, condemning her to a life of selling her body to keep her illegitimate daughter – Cosette (Anna Seyfried) alive. Having discovered the consequences of his actions and despite being a wanted man, Valjean vows to protect Cosette and becomes father and mother to her, raising her as a compassionate young woman. Set against the back drop of revolting peasants and a starving proletariat, Cosette falls for a young revolutionary, and now Valjean has more than his own liberty to worry about.

Based on the classic (although panned by critics at the time) novel of the same name by Victor Hugo, the story is dark and brooding, with the musical generally staged in a “black box”, with minimal setting. This is, of course, an adaption of the musical, so comparison with the book is not necessary or particularly helpful. The purists and West End experts will tell you that there are a number of deviations from the musical, with a couple of songs deleted, more truncated or with words, context and in some cases, performers changed, not to mention the new song that was written especially for the movie.

The first thing that strikes you about the movie is the huge settings, with hundreds of performers and enormous vistas. From the opening scenes in the dockyard, with a great wooden warship being dragged into a dry dock by inmate 24601 Valjean and his fellow prisoners, the power of the production really hits you. What follows very shortly however, is the intensity and closeness you feel for the performers. Even the smallest West End theatre struggles to deliver this level of intimacy, feeling much more like an ensemble piece, while here, the solo songs, with their big close ups and breathy, live recorded vocals making the hairs stand up on your neck.

The stars really did give their all in their preparation for their roles. Hugh Jackman rid himself of much of his body fat (although my wife claims he was all muscle anyway!) and had his head roughly shaved for the prisoner scenes. This however was nothing compared to Hathaway, who lost 25lbs and famously had her hair roughly cut on camera as part of the production. Her gaunt and ill looking face is really quite haunting, so hopefully, she is back on the donuts and back up to a healthy weight now.

The live vocal performances by all of the cast, with only the odd scene utilising playback is the defining technique in terms of building emotion and interaction between the characters. Never before in a musical number could a performer add a pause or inflection into a scene that traditionally would have had the vocals laid down months before. Possibly the only performer who seems to struggle with this, sounding a little wooden is Crowe, with whom it is obvious that his voice was right on the limit of what it could achieve. He does not sound comfortable in some registers and his range is quite limited compared to his fellow performers.

Many of the supporting cast are actually stars of the stage versions, most of them accepting much more minor parts than they originally played. Only Samantha Banks reprises her recent stage role, playing Eponine, the daughter of the Thenardiers (Sacha Baron Cohen & Helena Bonham Carter), the crooked innkeepers paid by Fantine to look after Cosette. She is one of the lesser known lead characters, but her stage experience comes to the fore and she does a sterling job. The comedy duo of Baron Cohen and Bonham Carter is simply inspired and it is hard to think of another adaption that beats their partnership. The face you see on the posters and indeed the cover of the Blu-ray is that of young Cosette, played by ten year old Isabelle Allen. She does very well not to be overawed by the talent around her, but plays the role perfectly, combining childish innocence with a genuinely strong performance.

As well the dockyard, the other sets include both the poor and rich parts of Paris, the mountain village that Valjean returns to after serving his sentence and where he meets a bishop – played by original Valjean stage performer Colm Wilkinson and the various houses, taverns, courts and churches along the way. On the whole, these look very good, but much of the movie was shot in the UK and it does show, Church architecture is too Anglican and Greenwich Naval College has just been used so much that it becomes too easy to spot, even with some extra bits CGI’d on to it. To be honest though, you will get so immersed in the characters, you just will not care.

About half way through the movie, the cast pretty much doubles, with the children of the revolution thrown into the mix. Main arrivals are Marius (Eddie Redmayne) and Enjolras (Aaron Tveit). These two friends incite the student uprising, ably assisted by the ragamuffin boys led by Gavroche (Daniel Huttlestone) who live in the remains of Napoleon’s old plaster Bastille Elephant. The battle scenes set on the barricades are chaotic, gritty and satisfying. Quite how an ensemble can sing while firing cannons at each other is a mystery to me, but they manage it somehow.

Director Tom Hooper has extracted incredibly powerful performances from his cast, and his omission from Best Director nominations in most of the major awards is something of a travesty. Of course Anne Hathaway did win, so did the sound and makeup teams, but Hooper has been overlooked in my opinion. That being said, the occasionally wayward camera work can making it hard going at times and compared to something like Life of Pi, it is no cinematic masterpiece.

So currently, there is virtually nothing to compare this movie too. It really is a new genre and style of performance and a very good one to boot. The hype surrounding the cinematic release is really quite justified and the translation to the small screen entirely successful.