It's when you start to become afraid of death that you learn to appreciate life. 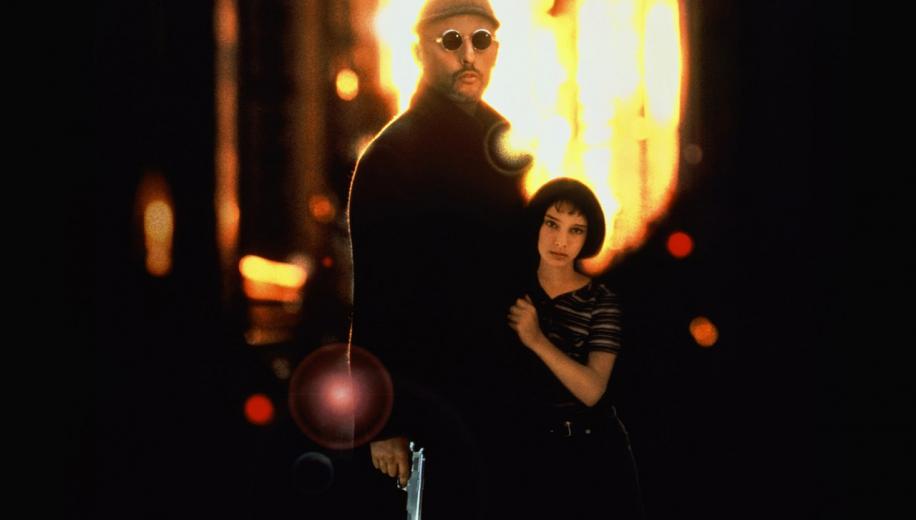 Luc Besson's majestic US debut was a continentally-flavoured ballet of violence, marrying career-defining performances, exquisite visual flair and a symphonic score to produce a modern classic.

Having enjoyed a certain popularity and respect for his very stylish French productions (an interesting counterpoint to the regard most have for his dime-a-dozen US writer/producer features), Besson made the leap with Leon, a French co-production that brought with him his go-to actor of choice, Jean Reno, who had starred in all of his preceding movies and who would take the lead here as the titular hitman. A seasoned hitman - the best in NYC - the character was borne from Reno's earlier cameo in Besson's tremendous Nikita, which introduced his tough French 'cleaner', Victor, replete with the same curt, consummately professional attitude, and the same look: a hat, and that distinctive coat and round sunglasses. Looking back it was probably quite daring to cast a French actor - practically unknown in the US - in the lead of the film, but, despite the undeniably visual flair and aesthetic to the production, it was a relatively modestly-budgeted piece which rode high on Besson's visual eye, comic book sensibilities, colourful performances, and that signature score from long-term Besson composer Eric Serra.
The story was controversial for Western sensibilities, particularly in its US cut, which, by being more chaste, only insinuated an unspoken relationship between the characters (the Director's preferred 'version longue' explicitly addressed, then defused, this issue). It saw Leon's seasoned assassin, a solitary, child-like soul, forced to take in Mathilda (Natalie Portman, making a storming debut), a wiser-beyond-her-years 12 year old, following a brutal assault by corrupt DEA agent Stansfield (Gary Oldman, in a role that would go on to define him) leaving her an orphan. The events that play out are both wild and whimsical; tense and tragic, endearing you to this unusual Bonnie-and-Clyde pair as they fight their nemesis, and bringing you to the point of emotional crescendo by the end of it. There are only a select few films - both before and since - that have managed to be this stylish and this emotional, particularly in the oft-dismissed action genre where Leon ostensibly subsists. However it's clear genre restrictions need to be redefined; as unlikely as it seemed at the time, this turned out to be something of a masterpiece.

Shot on 35mm, Leon was privy to a 4K remaster not long back for its 4K remastered Blu-ray re-release, and likely the same source has been used here to fashion its Ultra HD Blu-ray release, and with no digital intermediate limitations the end result is a native 4K release. It looks stunning. Sure, the modern digital crowd will be wondering what all this 'noise' is about, but that's natural grain, which affords the piece a wonderful texture that most modern digitally-shot productions have to implement in post-production if they want to even attempt an imitation at this kind of rich purity of classic cinematography.


Visually it's a reference masterpiece

Whatever the criticisms levelled at Besson's capabilities as a scriptwriter (and here it suited this stripped-down piece, allowing the colourful characters to better become iconic in their comic book world), his visual eye is undeniable, giving Leon a near-perfect visual cadence as the camera glides through streets and corridors, peers down from above as Stansfield grotesquely contorts whilst popping a pill, or focusses in on the reflection in Leon's glasses as he downs his signature glass on milk.

It's a visually opulent universe, with a staggering amount of detail - the NYC landscape; the weathered clothing and bloody faces; the weaponry, basically everything - rich for the mining, and never better capitalised on than with this latest Ultra HD Blu-ray release, which strikes a new standard in the level of clarity and texture that the film is afforded, even beyond the already stunning 4K remastered Blu-ray release that preceded it. Sure, there's anamorphic lens softness around the edges, and some shots looks more impressive than others, but overall it's a reference masterpiece. Implementation of HDR and WCG is subtle, rather than overwhelming, seeking to refine and enhance the image, but only in a natural and faithful way, without any desire to artificially over-extend the vibrancy of the visuals; content to hold true to the original designs Besson had for the style and look of the piece, and merely bolster them. Spectacular.

Leon's level of sheer perfection - both as a film and as an Ultra HD Blu-ray release - continues with its presentation of the masterful soundtrack, here rendered in Dolby Atmos (again, the same as available on the preceding release) built upon a fabulous and already reference-quality Dolby TrueHD 7.1 core which completes the release's achieved status of pure AV ecstasy.

Whilst dialogue - off the cuff murmurs, thick accents, wheezed grunts, bellowing roars and everything in between - maintains pristine clarity across the frontal array, with prioritisation where necessary, it's in the stunning score and tremendous affects coverage that Leon's audio defines itself.

Effects are myriad, right from the thunderous opening sequence, which delivers both silent kills aplenty and also empties entire clips into your living room wall, offering endless power and precision all dealt within the first few minutes. Besson's marriage of score and effects is sheer perfection, with heavy LFE cues giving untold life to the least likely objects - even Leon putting down his glass of milk becomes a bass-heavy cue into the subsequent score piece - whilst bringing key atmospherics to life in the environment, before absolutely decimating your soundstage with furious bouts of explosive violence. The shotguns boom; the grenades ignite the array; and assault rifles tear up the room - it's staggeringly good audio. And Serra's score is arguably the best work he's ever done, and not just on his Besson features. Alone, it's capable of bringing forth some sweeping emotional waves from within you, but coupled with the visuals, story, script and performances and it's just impossible not to get drawn right into this engulfing audiovisual maelstrom.

The US Best Buy Exclusive package relegates all of the extras to the accompanying Blu-ray copy, which matches the earlier Blu-ray releases and offers up a trio of solid supplements with a 10 year overview retrospective in Cast and Crew Look Back, and two great retrospective Interviews - Jean Reno: The Road to Leon and Natalie Portman: Starting Young. There's also a Fact Track which is available on the Extended Version of the film.

Of course the biggest extra - and the one which is available on the Ultra HD Blu-ray itself as well - is the Extended Cut, which is watchable on both discs by way of seamless branching. Also known as 'Version Longue', the Director's preferred version of the film runs almost 25 minutes longer and is arguably the better version of the film, with some pretty crucial character beats as well as a few great action sequences which tie intrinsically into the film's narrative (and, indeed, the final shot before the epilogue). As unlikely as it seemed at the time, Leon turned out something of a masterpiece

Although it has made its Ultra HD Blu-ray bow in the relative early stages of the format, Leon is currently only available as a Best Buy exclusive in the US (or available from Amazon in Canada), however this appears to be only until October, whereupon it should receive a mainstream release, and perhaps also a simultaneous UK release too. Nevertheless, true fans will find it impossible to resist importing, particularly with reference video and audio, as well as both cuts available via seamless branching. It really is a tremendous AV experience, and a fantastic movie, and it deserves to be in everybody's collection.